BBC Radio Foyle (Irish : BBC Raidió Feabhail) is a BBC Northern Ireland local radio station, serving County Londonderry in Northern Ireland. It is named after the River Foyle which flows through Derry, the city where the station is based. The station broadcasts from BBC's Northland Road studios on 93.1 FM in Derry. It was available on 792 kHz MW until 6 May 2021. There is also a small television studio based there used for interviews with the interviewee sitting in front of a CSO screen which normally has a live view of Derry. Since it broadcasts from a point close to the border between County Londonderry and County Donegal in the Republic of Ireland, it includes some coverage of the latter county.

It is an opt-out from BBC Radio's main Northern Ireland service, BBC Radio Ulster. BBC Radio Foyle's weekday schedule begins at 7:00am and continues until 4:00pm.

In June 2010, the BBC announced a trial scheme under which Radio Foyle would be available on DAB as a part-time sidecar station to Radio Ulster, using a similar format as the part-time longwave-programming optouts of BBC Radio 4 on the BBC National DAB multiplex. During this trial, the bitrate of Radio Ulster would drop during Foyle's separate broadcast hours, with Foyle carried as a split audio stream in the remaining space; outside of split shows, the full bitrate would revert to Radio Ulster. [1] 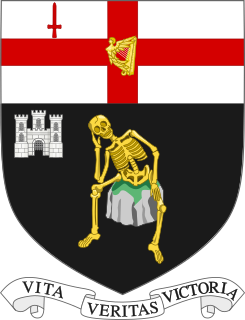 Derry, officially Londonderry, is the second-largest city in Northern Ireland and the fifth-largest city on the island of Ireland. The name Derry is an anglicisation of the Old Irish name Daire meaning "oak grove". The old walled city lies on the west bank of the River Foyle, which is spanned by two road bridges and one footbridge. The city now covers both banks.

County Londonderry, also known as County Derry, is one of the six counties of Northern Ireland, one of the thirty two counties of Ireland and one of the nine counties of Ulster. Before the partition of Ireland, it was one of the counties of the Kingdom of Ireland from 1613 onward and then of the United Kingdom after the Acts of Union 1800. Adjoining the north-west shore of Lough Neagh, the county covers an area of 2,118 km2 (818 sq mi) and today has a population of about 247,132.

Gerald Michael "Gerry" Anderson, was a radio and television broadcaster for BBC Northern Ireland. Renowned for his unique style and distinctive sense of humour, Anderson often referred to himself on his show, as "Turkey Neck", "Puppet Chin" or "Golf Mike Alpha".

Jazz FM is a radio station broadcasting on digital radio in the United Kingdom and Malta which predominantly plays jazz music, jazz standards as well as blues and soul music. The station also plays specialist programming in a wide variety of jazz disciplines. The station, in this incarnation set up by Richard Wheatly, can trace its roots back to 102.2 Jazz FM, which launched in 1990. The current station launched on 6 October 2008 at 19:00 BST. 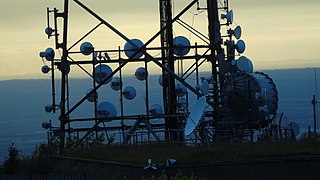 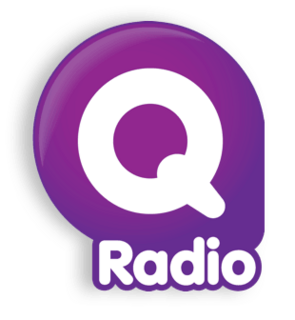 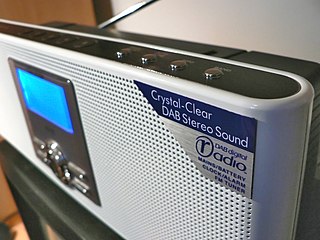 Absolute Radio 90s is a Semi-National Digital radio station owned and operated by Bauer as part of the Absolute Radio Network. Its output is non-stop 1990s hits.

Absolute Radio 00s is a Semi-National Digital radio station owned and operated by Bauer as part of the Absolute Radio Network. It broadcasts locally on Bauer's 11B Inverness DAB Multiplex. It broadcasts nationally via Smart Speaker streaming and online web streaming. Its output is non-stop 2000s hits.

Kisstory is a National Digital radio station owned and operated by Bauer Radio as part of the Kiss Network. It is a sister station to Kiss that plays "old skool and anthems". Kisstory is also currently a radio programme airing 8 hours per week. Then on 7 May 2013 Kisstory was expanded into a full-time station in response to positive feedback from listeners and at the expense of Q Radio. At the same time KissFresh, a then brand-new station playing "non-stop new beats including Hip-Hop, R&B, EDM, House and Garage", was given its own station.