BBC Roath Lock Studios is a television production studio that houses BBC drama productions including Doctor Who , Casualty and Pobol y Cwm . [1] The centre topped out on 20 February 2011 and filming for such productions commenced in autumn of the same year. [2]

The facility is located on a development site known as Porth Teigr, which included a proposed 3,700-square-metre (40,000 sq ft) digital media centre and an interactive exhibition titled Doctor Who Experience. [3] The facility has 500 to 600 people working on site. [4]

The successful planning application sought permission for a 300-metre (980 ft) long, 20,000-square-metre (220,000 sq ft) building housing studios and offices with a distinctive façade and repeating motifs. It will also have a gothic-style entrance inspired by some of William Burges' designs at Cardiff Castle and Castell Coch. The planning application showed the building would face the National Assembly's Tŷ Hywel building and the Atradius building across the water of Roath Basin. [5]

FAT architecture were appointed as architects and designed a bold facade in homage to the Cardiff architecture of William Burges and the local South Wales landscape. [6] Unusual requirements for the building included an exact replica, in design and orientation, of the Bristol studio's Holby City carpark and corridors wide enough for two Daleks to pass one another. [6]

A £2.5m bridge linking the drama village to Cardiff Bay was lifted into place. The bridge was manufactured in nearby Newport from where it was broken down into twelve pieces to allow transportation. The building branding was manufactured in Cardiff by a local company which also designed and implement the wayfinding signs [8] which was helped for a prestigious branding company [9]

The development has brought under one roof the production of shows formerly filmed in Cardiff's Broadcasting House, at Upper Boat Studios near Pontypridd, and in Bristol. [5]

Programmes confirmed to be filmed and produced at the studios include:

Other productions produced by Roath Lock, but not necessarily filmed at the studios include: Merlin, Atlantis, Being Human, The Living and the Dead, Sherlock, War & Peace, The Game, The Passing Bells, The Green Hollow, A Poet in New York, and To Walk Invisible. [1]

After the studios, offices and external filming lots were fully fitted out, filming for Pobol y Cwm and Casualty began in autumn 2011. Doctor Who moved into the 170,000 sq ft (15,800 sq m) site in 2012. The Sarah Jane Adventures was also scheduled to move to the facility in 2012, but future production of the series was cancelled in April 2011 due to the death of lead actress Elisabeth Sladen. [13] The village is part of the BBC's commitment to double television network production from Cardiff by 2016. [10]

Roath Basin is the largest single remaining undeveloped site in Cardiff Bay. It consists of approximately 27 acres and has an outline planning permission for 1,000 new homes and 100,000 sq m of commercial floor space. Igloo Regeneration, which is an investment fund managed by Aviva Investments, was selected by the Assembly Government as the Development Partner for the project.

Investment of £8.5 million is needed to provide a road connection through the site providing both private and public transport from Pierhead Street through to the Norwegian Church, where a new bridge will need to be constructed over the existing lock-entrance to the dock.

The project comprises two distinct, but inter-dependent, components; the regeneration of the currently derelict, former dock side land at Roath Basin would be commenced by Assembly Government investment into the site infrastructure, and the BBC Drama Village, which would total some 170,000 sq ft (16,000 m2) of television studios and ancillary accommodation, as well as a new office building, which could be operated as a "Digital Media Centre" where a range of BBC supply-chain companies and existing Welsh-based Creative Industry Sector businesses would be able to be accommodated. [14]

The Roath Lock Drama Village was served by the Baycar (Cardiff Bus number 6) service operated by Cardiff Bus, that ran every 10 minutes to Cardiff Bay and the City Centre.

Cardiff is the capital city of Wales and a county. Officially known as the City and County of Cardiff, it is the United Kingdom's eleventh-largest city and the main commercial centre of Wales. Cardiff is the base for the Senedd, most national cultural institutions and the majority of the Welsh media. At the 2011 census, the unitary authority area population was estimated to be 346,090, and the wider urban area 479,000. In 2011, Cardiff was ranked sixth in the world in the National Geographic magazine's list of alternative tourist destinations. Cardiff is the most popular visitor destination in Wales with 21.3 million visitors in 2017. 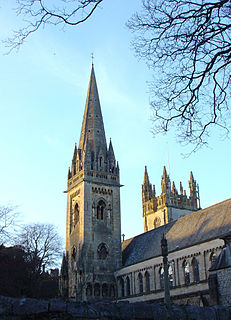 Cardiff Bay is the area of water created by the Cardiff Barrage in south Cardiff, the capital of Wales. It is also the name commonly given to the surrounding areas of the city. Cardiff Bay is also used as a metonym for Welsh politics, because it is the location of the Senedd. According to Cardiff Council, the creation of Cardiff Bay is regarded as one of the most successful regeneration projects in the United Kingdom.

Ioan Gruffudd is a Welsh actor. He first came to public attention as Fifth Officer Harold Lowe in Titanic (1997), and then for his portrayal of Horatio Hornblower in the Hornblower series of television films (1998–2003). Subsequent roles have included Lancelot in King Arthur (2004), Reed Richards/Mister Fantastic in Fantastic Four (2005) and its sequel (2007), William Wilberforce in Amazing Grace (2006), and Tony Blair in W. (2008).

Holby is a fictional city in the United Kingdom, the setting for the BBC medical dramas Casualty and Holby City, and the police drama HolbyBlue. It is based on the real city of Bristol, where Casualty was formerly filmed, and is notionally located in the fictional county of Wyvern in South West England, not far from the border with Wales. While Casualty has been filmed in Cardiff since 2011, Holby City is filmed in Elstree, Hertfordshire. Both shows are set in the same fictional Holby City Hospital. Holby has an airport called Holby International.

Ysgol Llanhari is a Welsh-medium school for 3-19 year olds situated in the village of Llanharry, Rhondda Cynon Taf, Wales.

Roger Williams is a Welsh playwright and screenwriter working in both English and Welsh. His work often examines aspects of modern Welsh life, such as the place of minority languages, the plight of declining industrial communities and the Cardiff gay scene.

Ieuan Rhys is a Welsh actor. His television work has included thirteen years in the BBC Cymru soap opera Pobol y Cwm, Seargent Tom Swann in the last series of A Mind to Kill and six series of the Welsh-language version of Mr & Mrs – Sion a Sian for HTV. For the last four series he portrayed Eurig Bell, the "not to be messed with" Deputy Headmaster in S4C's Gwaith/Cartref.

Roald Dahl Plass is a public space in Cardiff Bay, Cardiff, Wales. It is named after Cardiff-born author Roald Dahl, and is located on the coast along the south of the city centre. The square is home to the Senedd and the Wales Millennium Centre, a performing arts centre. The bowl-like shape of the space has made it a popular amphitheatre for hosting open-air concerts.

Kate Jarman is a Welsh actress. She is most well known for playing lead characters in Hearts of Gold, Nice Girl and Pobol Y Cwm

Mali Rhys Harries is a British television actress and presenter from Cardiff, Wales, who has been in the television industry since 1989. She has appeared in several well-established TV series in Welsh and English, such as Hinterland, The Indian Doctor and Pobol y Cwm.

Upper Boat Studios was a television studio complex leased to the BBC in mid-2006, and formerly operated by BBC Wales. 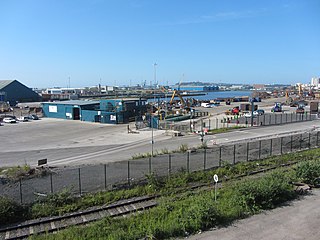 Cardiff Docks is a port in southern Cardiff, Wales. At its peak, the port was one of the largest dock systems in the world with a total quayage of almost 7 mi (11 km). Once the main port for the export of South Wales coal, the Port of Cardiff remains active in the import and export of containers, steel, forest products and dry and liquid bulks. 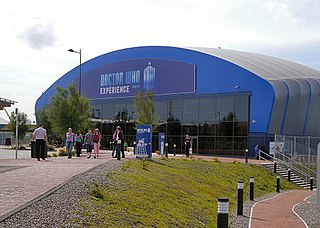 Since Doctor Who was first broadcast in 1963, there have been a number of exhibitions of props, costumes and sets throughout the United Kingdom. Some have been intended to be permanent, and others seasonal; most have been staged at existing tourist locations.

Porth Teigr is an area under development in the docks area of Cardiff Bay, in the south of Cardiff, Wales. Its development began in 2008.