The Box or BBC Box (BIC code: NYKU8210506) was a single ISO intermodal container that was tracked by BBC News between September 2008 and April 2009, as part of a project to study international trade and globalisation. [1] The Box was fitted with tracking equipment and painted in a special one-off livery. [2]

The tracking project was launched on 8 September 2008. [1] The project tracked a standard 40-foot-long (12.19 m) shipping container as it was transported by its owner, Nippon Yusen Kaisha (NYK) shipping line using intermodal freight transport with various cargoes. An on-board GPS unit tracked the Box's location and this was used to update a map showing the current location and previous route. If the container's GPS or communications signal was obstructed (such as having been stacked too far inside the ship's hold), the ship's own GPS location was used to manually update a map. [3] The tracking unit suffered technical problems during December 2008. [4]

The Box was painted in a special BBC paint scheme and was named after the book The Box: How the Shipping Container Made the World Smaller and the World Economy Bigger , which covers the effects of containerisation. [1] The project was assisted by the Container Shipping Information Service.

Following the end of the project in 2009, the shipping container was donated by its owner, Nippon Yusen Kaisha (NYK) to a charity to be turned into a soup kitchen. [5]

The box started off empty, travelling to its first destination under the BBC branding. The first cargo was a consignment of whisky from a Glasgow-based bottling plant to Shanghai, China. On arrival in Shanghai, the Box was met and reported on by British school pupils on a trip to China. [6]

(Empty)
from Southampton Maritime, England to a dry port at Coatbridge, Scotland (by rail, behind Freightliner 66594 NYK Spirit of Kyoto )
to Paisley, Scotland (by road)
Chivas Regal Scotch Whisky
from Paisley via Greenock, Scotland (by road)
via Port of Belfast, Northern Ireland, to Port of Southampton (on board Vega Stockholm)
via Suez Canal and Gulf of Aden; reloaded at Port of Singapore, to Port of Shanghai, China (on board Copenhagen Express)
Tape measures, cosmetics, and gardening products for Big Lots
from Port of Shanghai via Japan and Pacific Ocean to Port of Los Angeles, United States (on board NYK Starlight);
via New Jersey (by rail)
to Pennsylvania (by road)
Ink, spearmint flavouring, additives, and polyester fibre
[7] [8] from New York, (on board Iwato, IMO9106807, formerly Eagle I)
to Santos, Brazil (by sea)
Monosodium glutamate and auto parts
from Santos via Cape of Good Hope and Singapore (on board Aquitania, IMO9178288, Callsign A8HJ6)
reloaded at Port of Hong Kong to Port of Yokohama, Japan (on board NYK Clara, IMO9355408, Callsign 9VFW9)
Various (consolidated cargo)
from Yokohama 15 August 2009 (on board Ratana Thida 230, IMO9117129, Callsign HSAG2)
to Laem Chabang, Thailand (expected: 23 August 2009)
Tinned Catfood
25 September 2009 Lat Krabang, Bangkok, Thailand, Due to arrive Southampton, United Kingdom 21 October 2009

Later arrived in Southampton on 22 October at around 3 am, unloaded with crane L, being driven by Lee Harfield, the same driver who had loaded it when it left Southampton.

A 2007 book, Around the World in 40 Feet; Two Hundred Days in the Life of a 40FT NYK Shipping Container, written by Richard Cook and Marcus Oleniuk, detailed the journey of another NYK container. [9]

Containerization is a system of intermodal freight transport using intermodal containers. The containers have standardized dimensions. They can be loaded and unloaded, stacked, transported efficiently over long distances, and transferred from one mode of transport to another—container ships, rail transport flatcars, and semi-trailer trucks—without being opened. The handling system is completely mechanized so that all handling is done with cranes and special forklift trucks. All containers are numbered and tracked using computerized systems. 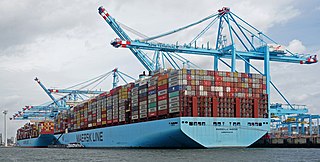 Container ships are cargo ships that carry all of their load in truck-size intermodal containers, in a technique called containerization. They are a common means of commercial intermodal freight transport and now carry most seagoing non-bulk cargo.

NYK may stand for: 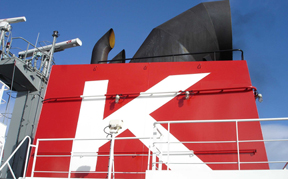 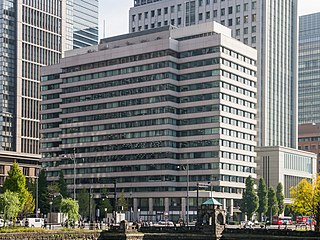 Nippon Yūsen Kabushiki Kaisha, also known as NYK Line, is a Japanese shipping company and is a member of the Mitsubishi keiretsu. The company has its headquarters in Chiyoda, Tokyo, Japan and a fleet of about 800 ships, that includes container ships, tankers, bulk and woodchip carriers, Ro-Ro car carriers, reefer vessels, LNG carrier and cruise ships.

DP World London Gateway is a port within the wider Port of London, United Kingdom. Opened in November 2013, the site is a fully integrated logistics facility, comprising a semi-automated, deep-sea container terminal on the same site as the UK's largest land bank for development of warehousing, distribution facilities and ancillary logistics services.

MS Asuka II (飛鳥II) is a cruise ship owned and operated by Nippon Yusen Kaisha. She was originally built by the Mitsubishi Heavy Industries shipyard in Nagasaki, Japan, as Crystal Harmony for Crystal Cruises. In 2006, Crystal Harmony was transferred from the fleet of Crystal Cruises to that of Crystal's parent company, Nippon Yusen Kaisha, and entered service under her current name. As of February 2009, she was the largest cruise ship in Japan.

Leif Höegh & Co is an international shipping company, founded in 1927 by Norwegian Leif Høegh (1896-1974). Since 2006 the company has been structured as two separate entities, Höegh Autoliners and Höegh LNG, with Leif Höegh & Co acting as a common holding company.

Terukuni Maru (照国丸) was a Japanese ocean liner owned by Nippon Yusen Kaisha (NYK). The ship was launched in 1929 by Mitsubishi Shipbuilding & Engineering Co. at Nagasaki, on the southern island of Kyūshū, Japan, entering service in 1930. She sank off the English coast in 1939 after striking a mine. Her sinking has been described as Japan's only World War II casualty outside East Asia before the 1941 attack on Pearl Harbor.

The NYK Virgo is a container ship owned by the Barlett Marine Corp. 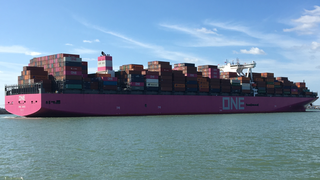 Ocean Network Express Pte. Ltd. is a container shipping company headquartered in Singapore and Tokyo and jointly owned by the Japanese shipping companies Nippon Yusen Kaisha, Mitsui O.S.K. Lines and K Line. It was formed in 2016 as a joint venture, inheriting the container shipping operations of its parent companies. As of 2017, it had a combined fleet size of 1.4 million TEU.

ACX Crystal is a container ship built in South Korea in 2008. In June, 2017, the ship was damaged in a collision with USS Fitzgerald south of Yokosuka, Japan.