"Three Hundred Big Boys" is the sixteenth episode in the fourth season of the American animated television series Futurama . It originally aired on the Fox network in the United States on June 15, 2003. Set in a retro-futuristic 31st century, the series follows the adventures of the employees of Planet Express, an interplanetary delivery company.

In this episode, Earth president Richard Nixon issues every citizen with a $300 tax rebate; with the episode following the Planet Express crew as they each spend their money. The episode was inspired by "22 Short Films About Springfield", an episode of The Simpsons . [1]

Zapp Brannigan leads an attack on Tarantulon VI, claiming numerous silken artworks for Earth. Earth President Richard Nixon considers this a windfall, and gives every citizen a $300 tax rebate. Brannigan later invites Leela and her friends to an exhibit of the silk treasures.

The Planet Express crew each contemplate how to spend their funds. Leela uses it to swim with a whale; Fry uses the money to buy and drink one hundred cups of coffee over the course of the episode, and Bender spends his on burglary tools to steal a $10,000 cigar. Bender refuses to smoke it until the exhibition. Others find their expenditures less thrilling: Professor Farnsworth uses the money to buy stem cells to give him a youthful appearance but discovers they only last temporarily, while Hermes buys a set of mechanical stilts for his son Dwight that inadvertently go haywire and drag the two off, rampaging through New New York. Kif buys a watch for his girlfriend Amy but accidentally loses it to the same whale that Leela was swimming with, though he eventually recovers it after a brief accusation of ambergris theft.

Eventually, they all gather for the exhibition. Just as Bender lights up the cigar, Hermes and Dwight, still stuck on the stilts, smash through the side of the building, causing the cigar to ignite the silk artworks. At the same time, Fry finishes the hundredth cup of coffee and enters a caffeine-induced state of hyperspeed, moving much faster than anyone else. Fry easily gathers all the guests onto a trolley, wheels them into an alley behind the museum, and extinguishes the fire before the hyperspeed ends. As they all recover from what just happened, they find that Zoidberg, who had been debating on how to spend his tax rebate for something that would make him happy, opted to spend it on a nice meal for a number of hobos. The guests join them for the meal, though Bender is soon caught by the cops and beaten up for the earlier robbery.

Futurama is an American animated science fiction sitcom created by Matt Groening that aired on Fox from March 28, 1999, to August 10, 2003, and on Comedy Central from March 23, 2008, to September 4, 2013. The series follows the adventures of slacker Philip J. Fry, who is cryogenically preserved for 1000 years and is revived in the 31st century. Fry finds work at an interplanetary delivery company, working alongside the one-eyed Leela and robot Bender. The series was envisioned by Groening in the mid-1990s while working on The Simpsons; he brought David X. Cohen aboard to develop storylines and characters to pitch the show to Fox. 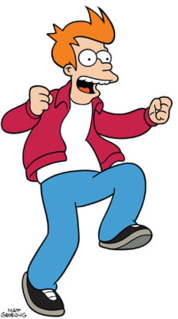 Philip J. Fry, commonly known by his surname Fry, is a fictional character and the protagonist of the animated sitcom Futurama. He is voiced by Billy West using a version of his own voice as he sounded when he was 25. He is a slacker delivery boy from the 20th century who becomes cryogenically frozen and reawakens in the 30th century to become a delivery boy there with an intergalactic delivery company run by his 30th great-grandnephew, Professor Hubert J. Farnsworth. He is the best friend and roommate of Bender and the boyfriend and later husband of Turanga Leela. He is the father of Yancy Fry, Sr., thus making him his own grandfather. He is the stepfather of Kif's offspring.

"A Flight to Remember" is episode ten in the first season of Futurama. It originally aired on the Fox network in the United States on September 26, 1999. This episode was written by Eric Horsted and directed by Peter Avanzino. Dawnn Lewis guest stars in this episode as LaBarbara Conrad. The episode is a direct parody of the 1997 film Titanic, while the title is a reference to Walter Lord's non-fiction book about the Titanic disaster A Night to Remember.

"Brannigan, Begin Again" is the second episode in the second season of the American animated television series Futurama. It originally aired on the Fox network in the United States on November 28, 1999. The episode was written by Lewis Morton and directed by Jeffrey Lynch.

"War Is the H-Word" is the seventeenth episode in season two of Futurama. It originally aired on the Fox network in the United States on November 26, 2000. The episode parodies several war films and shows, including Starship Troopers, Star Wars and M*A*S*H.

"The Route of All Evil" is the twelfth episode of the third season of the American animated television series Futurama, and the 59th episode of the series overall. It originally aired on the Fox network in the United States on December 8, 2002. In the episode, Dwight and Cubert form their own delivery company in an attempt to impress their fathers.

Futurama: Bender's Big Score is a 2007 American direct-to-video animated science fiction comedy-adventure film based on the animated series Futurama. It was released in the United States on November 27, 2007. It was the first Futurama production since the original series finale "The Devil's Hands are Idle Playthings". Bender's Big Score along with the three follow-up films, comprise season five of Futurama, with each film being separated into four episodes of the broadcast season. Bender's Big Score made its broadcast premiere on Comedy Central on March 23, 2008. The film was written by Ken Keeler, based on a story by Keeler and David X. Cohen, and directed by Dwayne Carey-Hill. 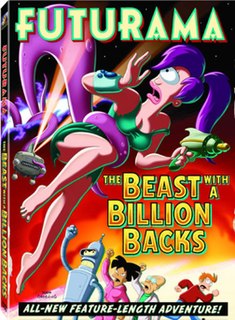 Futurama: The Beast with a Billion Backs is a 2008 American direct-to-video adult animated science-fiction comedy-adventure film based on the animated series Futurama, and the second of four straight-to-DVD films that make up the show's fifth season. The film was released in the United States and Canada on June 24, 2008, followed by a UK release on June 30, 2008 and an Australian release on August 6, 2008. The title refers to a euphemism for sexual intercourse—"the beast with two backs". Comedy Central aired the film as a "four-part epic" on October 19, 2008. The movie won an Annie Award for "Best Animated Home Entertainment Production".

Futurama: Into the Wild Green Yonder is a 2009 American direct-to-video adult animated science fiction comedy-adventure film based on the animated series Futurama, and the fourth and final of the direct-to-DVD films that make up the show's fifth season. The film was written by Ken Keeler, based on a story by Keeler and David X. Cohen, and directed by Peter Avanzino. Guest stars include Phil Hendrie, Penn Jillette, Snoop Dogg and Seth MacFarlane, who sings the theme song. In the movie, Leela becomes an outlaw when she and a group of ecologically-minded feminists attempt to save an asteroid of primitive life forms and the Violet Dwarf star from being destroyed, while Fry joins a secret society and attempts to stop a mysterious species known as the "Dark Ones" from destroying all life in the universe. The title itself is a reference to the U.S. Air Force Song, the main chorus of which describes reaching "Into the wild blue yonder".

The animated science fiction show Futurama presents a satirical look at politics and current affairs in a number of its episodes. Series creator Matt Groening intended from the outset that Futurama would lampoon not only the conventions of science fiction, but elements of present-day life, serving as a form of political and social satire.

"Rebirth" is the premiere of Futurama's sixth season, and the revival of the series. It originally aired on Comedy Central in the United States on June 24, 2010. The episode was written by David X. Cohen and Matt Groening, and directed by Frank Marino.

"In-A-Gadda-Da-Leela" is the second episode of the sixth season of the animated sitcom, Futurama. It originally aired directly after "Rebirth" on June 24, 2010 on Comedy Central. In the episode, Zapp Brannigan and Leela end up on a Garden of Eden-like world after fighting a planet-destroying satellite called V-Giny.

"Möbius Dick" is the fifteenth episode of the sixth season of the animated sitcom Futurama, and originally aired August 4, 2011 on Comedy Central. The episode was written by Dan Vebber and directed by Dwayne Carey-Hill. In the episode, the Planet Express crew pass through an area in space known as the Bermuda Tetrahedron, where many other ships passing through the area have mysteriously disappeared, including that of the first Planet Express crew. While exploring the area, a mysterious four-dimensional space whale devours the ship's engine, leaving them stranded in the area. The ship's captain, Leela, becomes obsessed with hunting down the whale.

"Neutopia" is the twentieth episode of the sixth season of the animated sitcom Futurama. It aired on Comedy Central in the United States on June 23, 2011.

"A Farewell to Arms" is the second episode of the seventh season of the animated sitcom Futurama. It originally aired on Comedy Central on June 20, 2012 directly after "The Bots and the Bees". In the episode, an ancient Martian prophecy predicts the end of civilization in the year 3012. The episode was written by Josh Weinstein and directed by Raymie Muzquiz. The episode received a WGA Award nomination.

"Love's Labours Lost in Space" is the fourth episode in season one of Futurama. It originally aired on the Fox network in the United States on April 13, 1999. The episode was written by Brian Kelley and directed by Brian Sheesley. This episode introduces the recurring character Zapp Brannigan when he attempts to prevent the Planet Express crew from completing their mission. It also introduces the characters of Kif Kroker, Brannigan's aide, and Nibbler, whom Leela adopts as a pet.

"Murder on the Planet Express" is the twenty-fourth episode of the seventh season of the animated sitcom Futurama. It originally aired on Comedy Central on August 21, 2013. The episode was written by Lewis Morton and directed by Frank Marino. In this episode, the crew get trapped aboard the Planet Express ship with a horrific alien creature. The episode's title derives from Murder on the Orient Express and parodies Alien and The Thing.