Three Little Girls in Blue is a 1946 Technicolor musical film directed by H. Bruce Humberstone and starring June Haver along with George Montgomery, Vivian Blaine, Celeste Holm, and Vera-Ellen. The 20th Century-Fox film was adapted from Stephen Powys' 1938 play Three Blind Mice and featured songs with music by Josef Myrow and lyrics by Mack Gordon. [4] The score is notable for the first appearance of the classic song "You Make Me Feel So Young" later popularized by Frank Sinatra in 1956. [5]

In 1902 Red Bank, New Jersey, sisters of modest means Pam (June Haver), Liz (Vivian Blaine), and Myra Charters (Vera-Ellen) inherit a chicken farm from their aunt. They soon discover that the windfall is not quite enough to finance their dreams of attracting and marrying millionaires. Reasoning that if one of them catches a rich husband, the other two will thereafter find it easier to do the same, they decide to pool their inheritances. Pam poses as a wealthy heiress, Liz poses as her social secretary, and Myra poses as her maid.

The three go to Atlantic City, check into a luxurious hotel, and promptly meet millionaire Steve Harrington (Frank Latimore). When Steve sends a bottle of champagne to Pam, Myra meets Mike (Charles Smith), a waiter who becomes taken with her. A third man, Steve's friend Van Damm Smith (George Montgomery), ostensibly another millionaire, joins in the following day when the girls' plot to interest Steve by pretending to be drowning goes awry. Steve and Van both court Pam, while Myra and Mike fall in love. Although ostensibly pursuing Pam, Steve begins to be attracted to Liz. Van proposes to Pam; however, she tells him the truth about her plan to marry a rich man and he in turn reveals that he is not really rich and is also scheming to marry a rich woman. The two call off their romance, deciding to stick to their plans of marrying money. Van helps Pam by telling Steve that she is in love with him; Steve proposes to Pam and she accepts.

The couples are all sorted out after a trip to Harrington's family home in Maryland, with some help from Steve's sister Miriam (Celeste Holm). Steve finally realizes he is in love with Liz, Van and Pam decide they would rather be with one another, and Mike and Myra are married. [6]

It was reported 20th Century-Fox wanted Broadway actor/dancer Harold Lang for the role of Vera-Ellen's boyfriend Mike but he had to refuse because of stage commitments. A great loss because he would have introduced the now-classic song "You Make Me Feel So Young". His replacement was non-singer/dancer, minor-player Charles Smith (actor). Although Lang appeared on television in the early 1950s, he made no commercial films.

Valentine Davies adapted the screenplay from the play Three Blind Mice by Stephen Powys (aka, Guy Bolton). [lower-alpha 1] Fox had acquired the American rights to the play in 1937, [10] first making a non-musical 1938 movie (also called Three Blind Mice ). [lower-alpha 2] It was adapted as the movie musical Moon Over Miami in 1941 before being tapped again five years later as the basis for Three Little Girls in Blue. [13] The plot—three fortune-hunting sisters encounter humorous difficulties—was scarcely altered; even the character names are largely unchanged from the play. The locale was shifted to Atlantic City and the timeframe moved to 1902, reflecting a turn-of-the-century theme popular in musicals at the time. [14]

Mack Gordon, who also produced the film, wrote the lyrics and Josef Myrow composed most of the songs for Three Little Girls in Blue, including "On the Boardwalk (in Atlantic City)", "Somewhere in the Night", and "You Make Me Feel So Young". Initially, Gordon thought "You Make Me Feel So Young" too modern for the 1902 setting, but when Darryl F. Zanuck heard all the music played, he insisted on using it three times in the movie; it would go on to become a perennial standard when Frank Sinatra recorded it in 1956 ( Songs for Swingin' Lovers! ). [5]

"This is Always", composed by Harry Warren with lyrics by Gordon, was sung by Haver and Ben Gage (singing for Montgomery) in production, but the number did not make the final cut; [15] however, it became a popular ballad the year the film was released, [16] recorded by both Jo Stafford and Dick Haymes. This duet for Haver and Montgomery was set on the beach at night. It was presumably deleted because it had close-ups of Montgomery, who reportedly had demanded a salary increase after production had started. The outtake remains in the trailer (promotion). Apparently a blacklist by studio head Darryl F. Zanuck took effect since Montgomery's subsequent films were mostly B movies, starting in 1947 with “The Brasher Doubloon”. After that, there were no more Montgomery films produced by 20th Century-Fox.

"If You Can't Get a Girl in the Summertime", playing in the background while Haver and Montgomery dance, was not written for the film but was composed in 1915 by Harry Tierney with lyrics by Bert Kalmar. [17]

Several of the main roles were not sung by the actors portraying them. Vera-Ellen's singing voice was dubbed by Carol Stewart, Ben Gage dubbed for George Montgomery, Bob Scott sang for Frank Latimore, and Del Porter for Charles Smith. [18]

Bosley Crowther of The New York Times gave the film a reserved but positive review, calling it "just a sprightly, happy show"; Holm and Vera-Ellen were singled out for praise, as was the score. [21] The industry paper Film Daily also discounted the story but praised the score and the production; this review, too, took note of the performances of Holm and Vera-Ellen. [22] 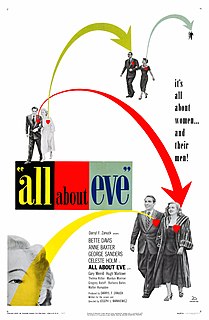 All About Eve is a 1950 American drama film written and directed by Joseph L. Mankiewicz, and produced by Darryl F. Zanuck. It is based on the 1946 short story "The Wisdom of Eve" by Mary Orr, although Orr does not receive a screen credit.

Come to the Stable is a 1949 American comedy drama film that tells the true story of the Abbey of Regina Laudis and the two French religious sisters who come to a small New England town and involve the townsfolk in helping them to build a children's hospital. It stars Loretta Young, Celeste Holm, Hugh Marlowe, Elsa Lanchester, Thomas Gomez, Dooley Wilson and Regis Toomey. 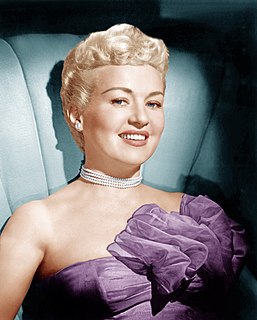 Vera-Ellen was an American dancer and actress. She is remembered for her solo performances as well as her work with partners Fred Astaire, Gene Kelly, Danny Kaye, and Donald O'Connor. She is best known for her starring roles in On the Town (1949) with Kelly and White Christmas (1954) with Kaye.

Celeste Holm was an American stage, film and television actress.

June Haver was an American film actress, singer, and dancer. Once groomed by 20th Century Fox to be "the next Betty Grable", Haver appeared in a string of musicals, but she never achieved Grable's popularity. Haver's second husband was the actor Fred MacMurray, whom she married after she retired from show business. 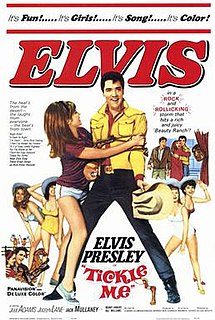 Tickle Me is a 1965 American musical comedy film directed by Norman Taurog and starring Elvis Presley as a champion rodeo bull rider and bronco buster. 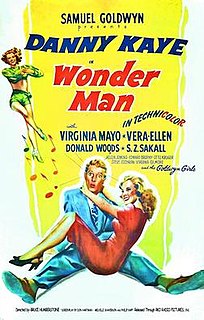 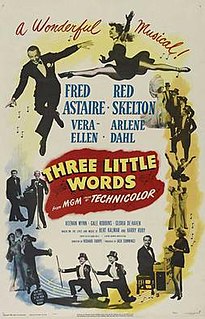 Three Little Words is a 1950 American musical film biography of the Tin Pan Alley songwriting partnership of Kalmar and Ruby. It stars Fred Astaire as lyricist Bert Kalmar and Red Skelton as composer Harry Ruby, along with Vera-Ellen and Arlene Dahl as their wives, with Debbie Reynolds in a small but notable role as singer Helen Kane and Gloria DeHaven as her own mother, Mrs. Carter DeHaven. The film, released by Metro-Goldwyn-Mayer, was written by Academy-Award-winning screenwriter George Wells, directed by Richard Thorpe and produced by Jack Cummings. Harry Ruby served as a consultant on the project, and he appears in a cameo role as a baseball catcher. The third in a series of MGM biopics about Broadway composers, it was preceded by Till the Clouds Roll By and Words and Music and followed by Deep in My Heart.

"You Make Me Feel So Young" is a 1946 popular song composed by Josef Myrow, with lyrics written by Mack Gordon. It was introduced in the 1946 musical film Three Little Girls in Blue, where it was sung by the characters performed by Vera-Ellen and Charles Smith.

Polly is a 1989 American made-for-television musical film adapted from the book Pollyanna by Eleanor H. Porter featuring an all African-American cast. It was directed and choreographed by Debbie Allen, starring Keshia Knight Pulliam, Phylicia Rashad and also featured the final performance of actress Butterfly McQueen. Polly was originally broadcast on NBC on November 12, 1989. 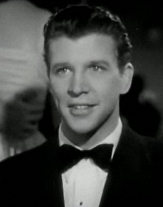 Carnival in Costa Rica is a 1947 American musical film directed by Gregory Ratoff and written by Samuel Hoffenstein, John Larkin, and Elizabeth Reinhardt. It was released in Technicolor by Twentieth Century-Fox. Dick Haymes, Vera-Ellen, Cesar Romero, and Celeste Holm starred as two pairs of lovers who try to thwart an arranged marriage at Carnival time in Costa Rica. 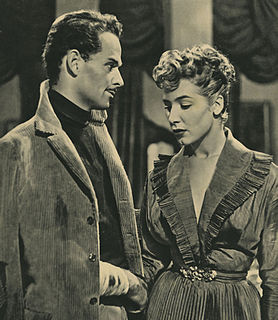 Franklin Latimore was an American actor. 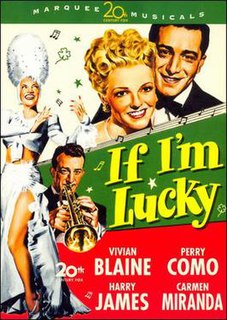 Wikimedia Commons has media related to Three Little Girls in Blue .
This page is based on this Wikipedia article
Text is available under the CC BY-SA 4.0 license; additional terms may apply.
Images, videos and audio are available under their respective licenses.