The Three Rivers Convention Center is the convention center for the Tri-Cities of south-eastern Washington, United States. It gets its name from the Snake River, Yakima River, and Columbia River, all of which intersect in the general area of the Tri-Cities. It is located in western Kennewick, adjacent to the Toyota Center, and opened in 2004. [1]

The Tri-Cities are three closely tied cities – Kennewick, Pasco, and Richland – located at the confluence of the Yakima, Snake, and Columbia Rivers in the Columbia Basin of Eastern Washington. Each city borders one-another, making the Tri-Cities seem like one uninterrupted mid-sized city. The three cities function as the center of the Tri-Cities metropolitan area, which consists of Franklin and Benton Counties. The Tri-Cities urban area consists of the city of West Richland, the CDPs of West Pasco and Finley, as well as the CDP of Burbank, despite the latter being located in the Walla Walla metropolitan area. 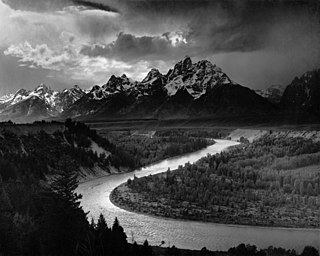 The Yakima River is a tributary of the Columbia River in south central and eastern Washington state, named for the indigenous Yakama people. The length of the river from headwaters to mouth is 214 miles (344 km), with an average drop of 9.85 feet per mile (1.866 m/km). It is the longest river entirely in Washington state. 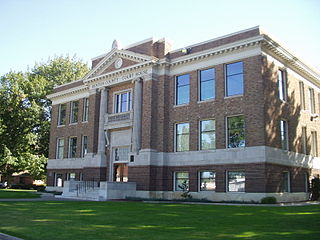 Benton County is a county in the south-central portion of the U.S. state of Washington. As of the 2010 census, its population was 175,177. The county seat is Prosser, and its largest city is Kennewick. The Columbia River demarcates the county's north, south, and east boundaries.

Kennewick is a city in Benton County in the southeastern part of the State of Washington, along the southwest bank of the Columbia River, just southeast of the confluence of the Columbia and Yakima rivers and across from the confluence of the Columbia and the Snake River. It is the most populous of the three cities collectively referred to as the Tri-Cities. The population was 73,917 at the 2010 census. July 1, 2017 estimates from the Census Bureau put the city's population at 81,607. 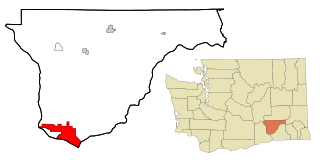 Pasco is a city in, and the county seat of, Franklin County, Washington, United States. 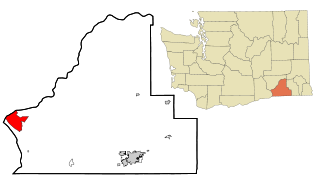 Burbank is a census-designated place (CDP) in Walla Walla County, Washington, United States, where the Snake River meets the Columbia. The population was 3,291 at the 2010 census. Named for Luther Burbank, the city is located just east of Pasco and Kennewick, across the Snake and Columbia Rivers, respectively. Burbank is part of the Tri-Cities, WA urban area, despite being located in the Walla Walla metropolitan area.

Southridge High School is a public high school located in the city of Kennewick, Washington, United States. The school is part of Kennewick School District. Construction of the $30 million building began in 1995, with classroom doors opening in the spring of 1997. The plans for Southridge High School were originally designed for a high school on the east side of the country; however, the school was never built and the Kennewick School District purchased the blueprints and plans. During construction, classes were held at Fruitland Elementary School, under the direction of Principal Ron Williamson. The first commencement was held inside the Toyota Center in June 1999. Southridge was the third 4A school constructed in Kennewick, but with the reorganization of leagues in 2006, Southridge became a 3A school and is now a member of the Columbia Basin League. Yet again, in 2008, it was decided that Southridge would be put back under the 4A schools along with 2 other high schools in Kennewick, WA. Once again in 2010 Southridge was brought back down to a 3A school. 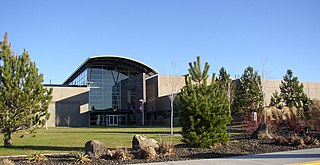 The Tri-City Herald is a daily newspaper based in Kennewick, Washington, in the United States. Owned by The McClatchy Company, the newspaper serves southeastern Washington, including the three communities of Kennewick, Pasco and Richland (Tri-Cities). It also serves the smaller cities of Benton City, Connell, Prosser and West Richland. The Tri-City Herald is the only major English-language newspaper in Washington east of Yakima and south of Spokane. The paper features local and national news, opinion columns, sports information, movie listings, comic strips, and other typical pieces of information.

State Route 240 (SR 240) is a state highway in the U.S. state of Washington. It travels diagonally from northwest to southwest within Benton County, serving the Hanford Nuclear Reservation and the Tri-Cities region. The highway begins at a junction with SR 24 and travels around Richland on a limited-access bypass. From there, it briefly overlaps Interstate 182 (I-182) and continues southeast as a freeway along the Columbia River into Kennewick, terminating at an interchange with U.S. Route 395 (US 395). SR 240 is one of the busiest highways in the Tri-Cities region, with a daily average of 76,000 vehicles on a section crossing the Yakima River Delta.

Gesa Stadium is a Minor League Baseball park in the northwest United States, located in Pasco, Washington. Opened in 1995, it is the home field of the Tri-City Dust Devils of the Class A-Short Season Northwest League (NWL).

Edgar Brown Memorial Stadium is the home stadium for the Chiawana High School Riverhawks and Pasco High School Bulldogs of Pasco, Washington. The school's football, soccer and track-and-field teams play their home games at "Edgar Brown", as it is commonly called.

The Tri-Cities in southeastern Washington, which include Kennewick, Richland, and Pasco, have fielded a number of minor league baseball teams in the Northwest League and its predecessor, the Western International League.

The Columbia River Exhibition of History, Science, and Technology (CREHST) was a non-profit museum and science center located in Richland, Washington, dedicated to telling the story of the Columbia Basin and surrounding region. Permanent exhibits include displays about the history of the Hanford Site and Richland, the geology of the Pacific Northwest, and others. The museum was founded in 1995 following the closing of the Hanford Science center, and it closed on January 31, 2014. The museum transitioned into the Hanford Reach Interpretive Center which opened in July 2014. Many of the exhibits from the CREHST were moved over to the Hanford Reach Interpretive Center.

Columbia Park is a public park located in Tri-Cities, Washington, United States. The park comprises the 400-acre (160 ha) Columbia Park East in Kennewick, and the adjacent 50-acre (20 ha) Columbia Park West in Richland. Together, the parks function as a single 450-acre (180 ha) park with 4.5 miles (7.2 km) of shoreline along the Columbia River. The park is a popular destination for residents of the surrounding area because of the many facilities and events at the park.

The Toyota Center is a multi-purpose arena in the northwest United States, located in Kennewick, Washington.

Steve Young is an American politician from the U.S. State of Washington who is currently serving on the Kennewick city council and was the 40th mayor of Kennewick. Young has also served on several committees in the Tri-Cities area. Outside of his public service, Young has held administrative roles at the Hanford Site and is currently Vice President of Mission Support Alliance which works with the Department of Energy.

Howard Amon Park is a multi-use recreation area on the shore of the Columbia River in Richland in the U.S. state of Washington. The original arch at the entrance to the park was the first thing in the city when it was incorporated in 1912, but has since been replaced. The park is named after Howard Amon, one of Richland's early settlers. 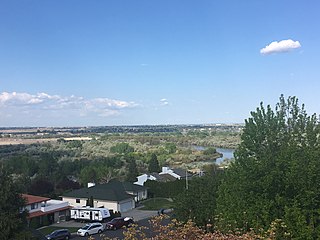 The Yakima River Delta is an area of land in Richland, Washington where the Yakima River enters the Columbia River at River Mile 335. It hosts several protected areas and is crossed by State Route 240. This area is mostly floodplain with riparian-type growth, including non-native species such as Russian olive. Amon Creek enters the Yakima River in this area.

The Southridge Sports and Events Complex is a 52-acre (21 ha) development on the south side of Kennewick in the U.S. State of Washington. It is adjacent to U.S. Route 395 between 27th and Hildebrand Boulevard and is near Southridge High School.