Threeway is an unincorporated community in Westmoreland County, in the U. S. state of Virginia.

Woodruff is a town in Oneida County, Wisconsin, United States. The population was 2,055 at the 2010 census. The census-designated place of Woodruff is located in the town.

United Airlines Flight 615 was a US transcontinental east-west airline service from Boston to Hartford, Cleveland, Chicago, Oakland and San Francisco. On August 24, 1951, the Douglas DC-6B with registration N37550 operating the service, crashed on approach to Oakland, causing the death of all 44 passengers and 6 crew members on board.

Igantzi is a town and municipality located in the province and autonomous community of Navarre, northern Spain. 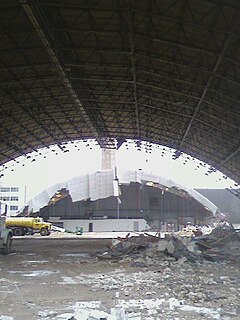 Robertson Memorial Field House was a multi-purpose arena on the Bradley University campus in Peoria, Illinois. The arena, built inside two surplus World War II airplane hangars in 1949 for $400,000, had a 3-foot raised floor as its sports court and event stage.

Washington Boro is a census-designated place (CDP) in Manor Township, Lancaster County, Pennsylvania, United States, along the Susquehanna River. The ZIP code here is 17582. It is served by the Penn Manor School District and is the terminus of both Pennsylvania Route 441 and Pennsylvania Route 999. As of the 2010 census the population was 729 residents.

Lushes Bight–Beaumont–Beaumont North is a town in the Canadian province of Newfoundland and Labrador. The town had a population of 168 at the 2016 Census, down from 275 in the Canada 2006 Census.

Greenville is a former settlement in Alameda County, California. It was located 2.5 miles (4.0 km) southwest of Altamont, at an elevation of 584 feet. The name is in honor of John Green, first store owner here.

Skinners is an unincorporated community in El Dorado County, California. It is located 4.25 miles (6.8 km) west-northwest of Shingle Springs, at an elevation of 1362 feet.

Pelican State Beach is a designated California State Beach located in Del Norte County, California. Located 21 miles (30 km) north of Crescent City on US Route 101 near the town of Smith River, this undeveloped site is immediately south of the Oregon state line, making this site the northernmost California state beach. It is the northern terminus of the California Coastal Trail.

Otter Creek Township is one of the twenty-one townships of Tama County, Iowa, United States.

York Township is one of the twenty-one townships of Tama County, Iowa, United States.

Fox Run is a neighborhood of York in York County, Pennsylvania, United States. Fox Run includes both houses and apartment complexes and it is adjacent to the neighborhood of McDonald Heights.

Japan is a small village in eastern Hazle Township, Luzerne County, Pennsylvania located on Route 940. It is just west of the borough of Jeddo and these two names were designated by the Hazleton Coal Company, which used the Japanese port of Jeddo. It is drained by the Black Creek, a tributary of the Nescopeck Creek, westward into the Susquehanna River. It is split between the Hazleton zip codes of 18201 and 18202.

West End is an unincorporated community in Gloucester County, in the U. S. state of Virginia.

KSAQ 102.3 FM is a radio station licensed to Charlotte, Texas. The station broadcasts a country music format and is owned by Creative RF Venture Group LLC.

Hubbell is an unincorporated community in the southwestern corner of Jefferson Township, Owen County, in the U.S. state of Indiana. It lies near the intersection of County Road 750 South and Indiana Highway 157, which is a community nearly twenty miles southwest of the city of Spencer, the county seat. Its elevation is 528 feet, and it is located at 39°10′59″N87°0′44″W. This community is also known as Hubbells Station.

Blairsville is an unincorporated community in Clermont County, in the U.S. state of Ohio.

Orcasur is a ward (barrio) of Madrid belonging to the district of Usera. 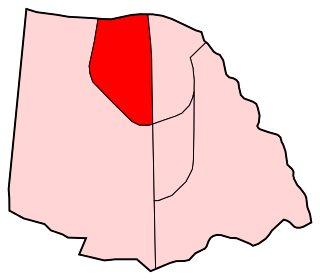 Los Ángeles is a ward (barrio) of Madrid belonging to the district of Villaverde.