Thresher & Glenny, founded in 1755,[ citation needed ] is one of the world's oldest surviving tailors, shirt makers and outfitters. The company has held Royal Warrants since the late eighteenth century and makes court attire, and bespoke and ready-for-service gentlemen's garments including suits, jackets, shirts and ties. Today the company trades through a retail outlet at 1 Middle Temple Lane, in London, England.

The company's association with the Strand district of London dates back to its foundation. The original firm of bodice makers was established in 1755 near the Inns of Court. In 1724, the hosier Thomas Street began trading (no connection) next to the newly built St Mary-le-Strand, "where the maypole once o’erlooked the Strand". His premises occupied part of a small development of three houses and an inn (the Peacock) that had first been leased in May 1703 to Thomas Lee, citizen and merchant tailor, by the ground landlord, the Duke of Dorset. [1] In 1749, John Thresher was advertising as being "at the Peacock next door to Somerset House in the Strand".

The firm traded as Newham and Binham in 1768; by 1777 it was known as Newham and Thresher of 152 the Strand. By 1784, the business was taken over by Richard Thresher, and became official hosier to George III in 1790. Richard Thresher remained a partner until 1805 when George Thresher replaced him, and in 1817 the company was taken over by John Thresher. John Thresher traded as a hosier, mercer and masquerade maker in Panton Street, Haymarket between 1822 and 1835, and in 1827 described himself as "hosier, glover and flannel draper to His Majesty". [2] [3]

By the early years of Queen Victoria’s reign, the company adverts read, "Thresher Son and Glenny, hosiers to the Queen, Outfitters and Ready-made Linen warehouse, 152, Strand". In 1854 an outpost of the firm was established at Kadikoi, "between Balaklava and the Camp, for securing safe custody and punctual delivery of parcels to the Army in the Crimea". [4] In 1878, the firm supplied canvas shoes dyed with ink for officers embarking for the Afghan War. [4] In 1901 the firm traded as Henry John Glenny "Indian and Colonial Outfitter". [5]

The Thresher and Glenny partnership was cemented by marriage over several generations, through which the Glenny name became predominant. The last family member involved in the firm, Henry Glenny, died in 1936, by which time the company had extended its operations to Clifford Street, Savile Row, Conduit Street, Mayfair and Gracechurch Street in the City of London. [6]

Military, naval and colonial officers made up a large part of the company's clientele at the height of the British Empire, and a number of specialist items were developed for their specific purposes, including ‘Indian Gauze waistcoats’, and luggage for the transport of Thresher & Glenny clothing around the world. [7] Luggage was an important part of the company's business throughout the nineteenth and early twentieth centuries, most probably through the acquisition of the business and trade book of Nicholas Ager Hoskins, trunk maker and dealer in brass and portable furniture. [8] Thresher & Glenny designed overland trunks for journeys to India, as well as trunks that were custom made to fit the cabins of P&O’s steamships to Malta, Alexandria and India. P&O’s information leaflets advised that the only regulation trunks for their vessels were supplied by Thresher & Glenny. [9] [10] Other inventions included the trenchcoat worn by British army officers during the 1914-1918 war (a claim also made by Aquascutum). [11] The company made over 28,000 trenchcoats over the course of the war, retaining in the 1930s a list of the first 15,000 purchasers, with their regiments. [4]

Nelson is the subject of the most famous anecdote regarding the firm:

Nelson in 1797 lost his arm in a fight with a treasure ship off Santa Cruz. On his next visit to London he called upon Mr Thresher at the Sign of the Peacock, from whom he was accustomed to buying large quantities of silk stockings. Mr Thresher naturally hastened to express regret for the loss of the arm, but Nelson cut him short: ‘Tut, tut man; damn lucky for you it wasn’t my leg. I want another dozen pairs of silk stockings.' [12]

Thresher & Glenny currently holds a Royal Warrant as shirt makers to the Royal Household, and the company has original Royal Warrants dating back to George III in 1783.

On the occasion of King William IV’s coronation in 1833, The Standard noted that the outside of Thresher & Glenny’s was illuminated with ‘a splendid crown’. [13]

In 2003, The Independent reported on the consultation on abandoning the use of ceremonial wigs in English law courts, writing that Thresher & Glenny took "a week to make three barrister's wigs" using horsehair from Argentina. The article predicted that the firm would oppose the abolition of wigs. [14] 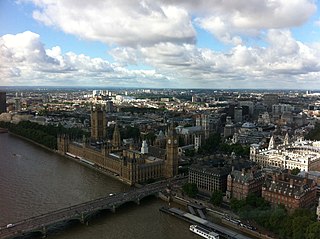 The City of Westminster is an Inner London borough that also holds city status. It occupies much of the central area of Greater London including most of the West End. Historically in Middlesex, it is to the west of the City of London, directly to the east of the Royal Borough of Kensington and Chelsea, and its southern boundary is the River Thames. The London borough was created with the 1965 establishment of Greater London. Upon its creation, it inherited the city status previously held by the smaller Metropolitan Borough of Westminster from 1900, which was first awarded to Westminster in 1540.

A wig is a head or hair accessory made from human hair, animal hair, or synthetic fiber. The word wig is short for periwig, which makes its earliest known appearance in the English language in William Shakespeare's The Two Gentlemen of Verona. Some people wear wigs to disguise baldness; a wig may be used as a less intrusive and less expensive alternative to medical therapies for restoring hair or for a religious reason. 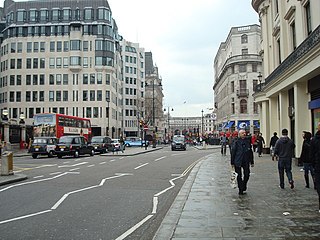 Bond Street in the West End of London links Piccadilly in the south to Oxford Street in the north. It has been popular for retail since the 18th century as the home of many fashion outlets that sell prestigious or expensive items. The southern section is Old Bond Street and the longer northern section New Bond Street—a distinction not generally made in everyday usage. 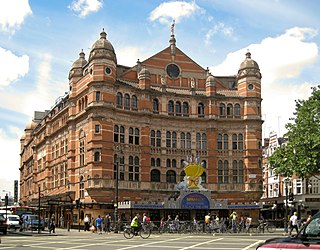 The Westminster Review was a quarterly British publication. Established in 1823 as the official organ of the Philosophical Radicals, it was published from 1824 to 1914. James Mill was one of the driving forces behind the liberal journal until 1828.

Gieves & Hawkes is a bespoke men's tailor and menswear retailer located at №1 Savile Row, London, founded in 1771 and now owned by the Hong Kong conglomerate Trinity Ltd. Gieves and Hawkes is one of the oldest continual bespoke tailoring companies in the world. The company holds a number of Royal Warrants, and provides ready-to-wear as well as bespoke and military tailoring. The current creative director is John Harrison.

Wolsey is a heritage British clothing brand founded in 1755, making it one of the oldest existing textile companies in the world. The brand sells men's clothing and accessories, including a range of knitwear, socks, underwear and scarves. The company holds a Royal Warrant and is based in Leicester, England, where it was originally established. The company name, adopted in 1920 when R Walker & Sons merged with W Tyler and Sons, is a reference to Cardinal Wolsey. 'Wolsey' is a registered trademark.

Swaine Adeney Brigg is a British luggage maker and umbrella-maker founded in the mid-eighteenth century.

James Purdey & Sons, or simply Purdey, is a British gunmaker based in London, specialising in high-end bespoke sporting shotguns and rifles. Purdey holds three Royal Warrants of appointment as gun and rifle makers to the British and other European royal families.

Hooper & Co. was a British coachbuilding company based in Westminster London. From 1805 to 1959 it was a notably successful maker, to special order, of luxury carriages both horse-drawn and motor-powered.

Garrard & Co. Limited, formerly Asprey & Garrard Limited, designs and manufactures luxury jewellery and silver. George Wickes founded Garrard in London in 1735 and the brand is headquartered at Albemarle Street in Mayfair, London. Garrard also has a presence in a number of other locations globally. Garrard was the first official Crown Jeweller of the UK, charged with the upkeep of the British Crown Jewels, from 1843 to 2007, and was responsible for the creation of many tiaras and jewels still worn by the British royal family today. As well as jewellery, Garrard is known for having created some of the world's most illustrious sporting trophies, including the Americas Cup, the ICC Cricket World Cup Trophy and a number of trophies for Royal Ascot in its role as Official Trophies and Silverware Supplier, which originally dates back to the first Gold Cup in 1842.

Aquascutum is a British-based luxury clothing manufacturer and retailer. It is currently owned by Shandong Ruyi.

James Simmons was a newspaper proprietor, bookseller, banker and business entrepreneur. He was a politician who was active in local government in Canterbury and sat in the House of Commons from 1806 to 1807.

Thomas Parke was a Liverpool merchant, banker and privateer. He was part of the complex network of business interests and finance behind the African and Atlantic slave trade of the later 18th century. 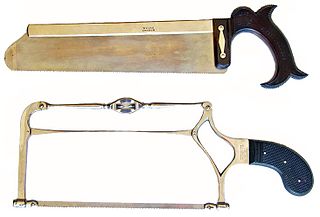 John Weiss & Son were London-based surgical instrument makers during the 1700s and 1800s.

Dege & Skinner are a bespoke gentleman's tailor located at 10 Savile Row, London. Founded in 1865, they are one of the oldest, continually operated bespoke tailoring companies in the world. They have the Row's first and only on-site, bespoke shirt service.

Hawes & Curtis is a British fashion company founded in 1913, currently operating 29 stores in the United Kingdom including two in Jermyn Street, London. The brand is best known for their shirts and jackets.