Threxton All Saints is a round-tower church at Threxton Hill situated east of the village of Little Cressingham and west of the town of Watton in the English county of Norfolk. [1] The church is medieval with a late 13th-century tower as well as a 14th-century octagonal font and remnants of medieval stained glass in at least one window. [1] The building is a Grade I listed building and retains some wall decorations which survived the reformation after being partitioned as part of a mausoleum and uncovered during the late 20th century. [1] [2] 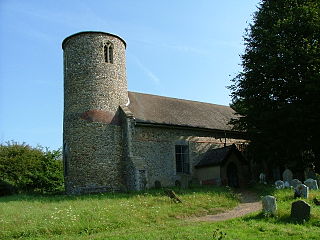 Round-tower churches are a type of church found mainly in England, mostly in East Anglia; of about 185 surviving examples in the country, 124 are in Norfolk, 38 in Suffolk, six in Essex, three in Sussex and two each in Cambridgeshire and Berkshire. There is evidence of about 20 round-tower churches in Germany, of similar design and construction to those in East Anglia. Countries with at least one round-tower church include Andorra, the Czech Republic, Denmark, France, Italy, Sweden, Norway, Poland and South Africa.

Little Cressingham lies 2.5 miles (4.0 km) south east by road from Great Cressingham, 3 miles (4.8 km) west of Watton and 8 miles (13 km) south of Swaffham in the Breckland District of Norfolk. It covers an area of 11.90 km2 (4.59 sq mi) and had a population of 157 in 70 households at the 2001 census It is in the civil parish of Great Cressingham. The village is located on the edge of the Stanford Battle Area.

Watton is a market town in the district of Breckland within the English county of Norfolk. The A1075 Dereham-Thetford road and the B1108 Brandon-Norwich Road meet at a crossroads here, where the town developed, about 20 miles (32 km) west of Norwich. 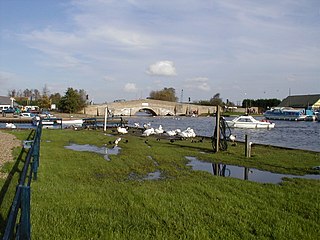 Potter Heigham is a village and civil parish on the River Thurne in the English county of Norfolk. It is situated some 20 km (12 mi) north-east of the city of Norwich on the A149 road, and within the Broads.

Breckland District is a local government district in Norfolk, England. Its head office is located at Elizabeth House in Dereham. It is a second tier local government authority that sits below Norfolk County Council.

Anstey is a village and civil parish in the East Hertfordshire district of Hertfordshire, England, about 15 miles (24 km) miles northeast of Stevenage. According to the 2001 Census the population of the parish was 338, reducing to 299 at the 2011 Census.

Bagthorpe with Barmer is a civil parish in the English county of Norfolk. The parish includes the hamlets of Bagthorpe and Barmer, and is situated some 15 km west of Fakenham and 20 km north east of King's Lynn. As the population of the civil parish remained less than 100 at the 2011 Census it was included in the civil parish of Stanhoe.

Salle is a village and civil parish in the English county of Norfolk. It is around 10 miles (16 km) north-west of Norwich in Broadland district. The village, which is pronounced Saul, gets its name from "Sallow Wood", Sallow referring to Willow in Norfolk.

Wayland is an area in the district of Breckland within the English county of Norfolk. It is situated approximately 20 miles west of Norwich.

Pudding Norton is a village and civil parish in the English county of Norfolk. It covers an area of 2.30 sq mi (6.0 km2) and had a population of 267 in 126 households at the 2001 census, falling to 252 at the 2011 Census. For the purposes of local government, it falls within the district of North Norfolk. 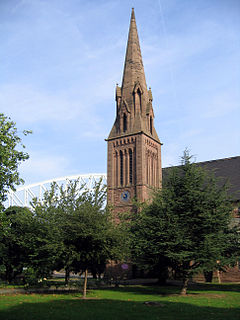 All Saints' Church is the parish church of Runcorn, Cheshire, England, sited on the south bank of the River Mersey overlooking Runcorn Gap. There is a tradition that the first church on the site was founded by Ethelfleda in 915. That was replaced, probably in about 1250, by a medieval church that was altered and extended in the 14th and 15th centuries. By the 19th century the building's structure had deteriorated and become dangerous, and it was replaced by a new church, built between 1847 and 1849 to the designs of Anthony Salvin. 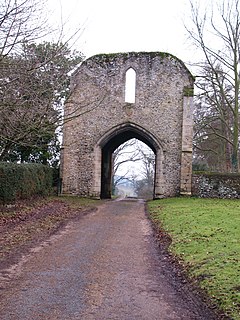 West Acre Priory of St. Mary and All Saints was a medieval monastic house at West Acre in the King's Lynn and West Norfolk district of Norfolk, England founded c.1100 by the de Toni family. Later an Augustinian fraternity, it was closed down in 1538 as part of the Dissolution of the Monasteries under King Henry VIII. It is now a ruin.

Rumburgh Priory was a Benedictine priory in located in the village of Rumburgh in the English county of Suffolk. The priory was founded in about 1065 as a cell of St Benet's Abbey at Hulme in Norfolk. At the time of the Domesday survey it had 12 monks. The ownership of the priory was transferred to St Mary's Abbey in York towards the end of the 12th century. The priory had chapels at Wissett and Spexhall but was "suppressed" in 1528 by Cardinal Wolsey and used to provide funds for the building of Cardinal College in Ipswich.

All Saints Church, West Harling, is a redundant Anglican church in the civil parish of Harling, Norfolk, England. It is recorded in the National Heritage List for England as a designated Grade I listed building, and is under the care of the Churches Conservation Trust. The church stands in an isolated position on the edge of Thetford Forest.

St Faith's Church is a redundant Anglican church in the village of Little Witchingham in Norfolk, England. It is recorded in the National Heritage List for England as a designated Grade II* listed building, and is under the care of the Churches Conservation Trust. It stands in a relatively isolated position in country lanes, about 9 miles (14 km) northwest of Norwich and 3 miles (5 km) south of Reepham. It is notable for its sequence of medieval wall paintings.

All Saints' Church is a redundant Anglican church in the village of Thurgarton, Norfolk, England. It is recorded in the National Heritage List for England as a designated Grade I listed building, and is under the care of the Churches Conservation Trust. The church stands in an isolated position on a crossroads north of the village, 6 miles (10 km) south of Cromer, to the west of the A140 road.

Richard Makilwaine Phipson (1827–1884) was an English architect. A diocesan architect for the Anglican Diocese of Norwich, he is responsible for the renovation of almost 100 churches in East Anglia. 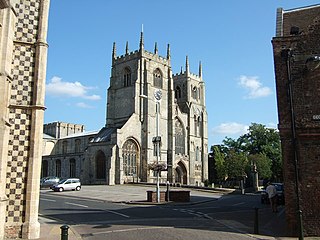 King's Lynn Minster is a Grade I listed parish church in the Church of England in King's Lynn. 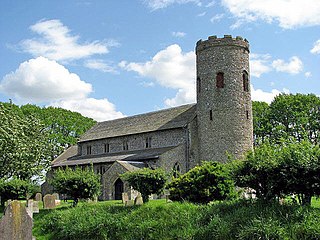 St Margaret's Church is a round-tower church in Burnham Norton, Norfolk, England. Likely to have been built in the 11th century, the building retains many medieval architectural features, and is Grade I listed. It also retains an elaborately decorated 15th-century pulpit, considered one of the finest surviving examples of its type.