The Thrissur Press Club (TPC) is an association of primarily news journalists and media professionals in the Thrissur City, Kerala, India. It is also the District Unit of Kerala Union of Working Journalist. [1] [2] [3]

Thrissur (, also known by its former name Trichur, is a city and the headquarters of the Thrissur district in Kerala, India. Known as “God’s Own Town”, it is famous for the Pooram festival, one of the most celebrated festivals in the world. It is the third largest urban agglomeration in Kerala after Kochi and Calicut urban areas and the 20th largest in India. 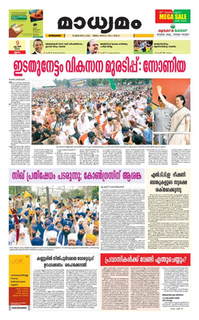 Moolayil Narayana Menon Vijayan, popularly known as Vijayan Mash was an Indian academic, orator, columnist and writer of Malayalam literature. Known for his leftist ideals and oratorical skills, Vijayan was the president of the Purogamana Kala Sahitya Sangham and served as the editor of Deshabhimani. He published a number of books of which Chithayile Velicham received the Kerala Sahitya Akademi Award for Literary Criticism in 1982. 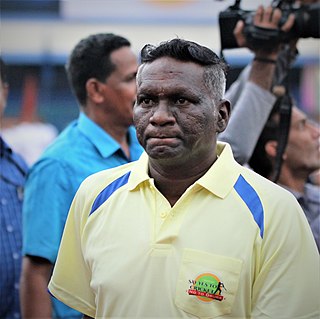 Inivalappil Mani Vijayan, popularly known as Kalo Harin, is a former professional Indian football player. Playing in the striker position, he formed a successful attacking partnership with Bhaichung Bhutia for the Indian national team in the late nineties and early 2000s. Vijayan was crowned Indian Player of the Year in 1993, 1997 and 1999, the first player to win the award multiple times. He was also awarded the Arjuna award in 2003.

Club FM is a private FM radio station for the state of Kerala in India, operated by the Mathrubhumi newspaper in Kerala, specialising in popular music throughout the day. It received three RAPA awards in 2007, instituted by the Radio and TV Advertising Practitioners Association of India to honour exceptional work in radio and television. The station transmits 24/7 entertainment, songs and public awareness information. The frequency for the stations in three cities – Thiruvananthapuram, Kochi, and Kannur – is 94.3 MHz. At Kozhikode, Thrissur, and Alappuzha, the frequency is 104.8 MHz. 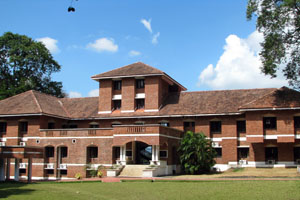 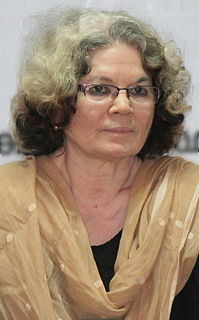 Sarah Joseph is a novelist and short story writer in Malayalam. She won the Kendra Sahitya Akademi Award for her novel Aalahayude Penmakkal. She also received the Vayalar Award for the same novel. Sarah has been at the forefront of the feminist movement in Kerala and is the founder of Manushi. She and Madhavikutty are considered among the leading women writers in Malayalam. She joined the Aam Aadmi Party in 2014 and contested the 2014 parliament elections from Thrissur.

Guruvayur–Thrissur section is a spur line functioning under Trivandrum railway division of Southern Railway Zone. This is a single Broad Gauge line which begins at Thrissur city and ends at Guruvayur in Thrissur District of Kerala. The 23 kilometres (14 mi) section was opened for traffic in the year 1994. The line connects the Cultural Capital of Kerala, Thrissur to the Temple Town of Kerala, Guruvayur, the fourth biggest temple in India in terms of the number of devotees per day. 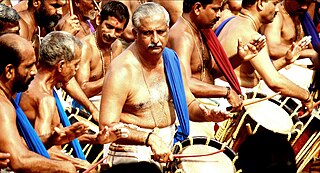 Peruvanam Kuttan Marar is a chenda artist. He leads several popular traditional orchestra performances in Kerala. He is a recipient of Padma Shri award in the year 2011 for his contributions in the field of art.

Thrissur City Police (TCP), a division of the Kerala Police, is the law enforcement agency for the City of Thrissur, Kunnamkulam and the temple town of Guruvayoor. The city police force is headed by a Commissioner of Police, an IPS officer, and the administrative control vests with the Home Ministry of Kerala. Thrissur City Police is the largest Police District in Kerala State covering an area of 570.79 Square kilometre. 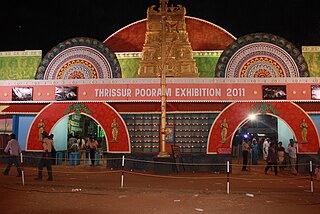 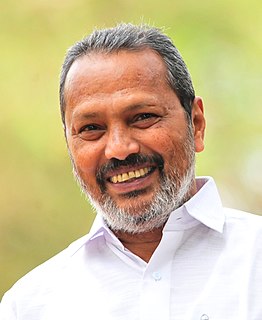 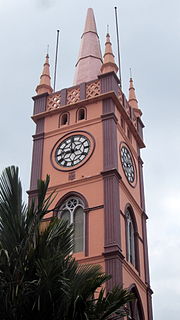 The Thrissur Municipal Corporation is the civic body that governs the Thrissur city in Kerala, India. It is the third largest city Corporation in the state of Kerala by area and population. Established as a Municipality since 1921 under the Cochin Municipal Regulations, it is responsible for civic infrastructure and administration; the distribution of electricity and water for Thrissur city. The Corporation manages 101.42 km of Thrissur city limits of through 55 wards through five zones Ayyanthole, Vilvattom, Ollukkara, Ollur and Koorkanchery. 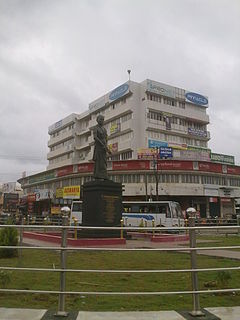 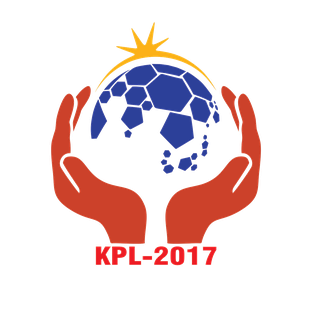 The 2016–17 Kerala Premier League Season is the fourth season of the Kerala Premier League. Unlike last 3 seasons, The season features 11 teams which will be divided into 2 groups with Group A having 5 and Group B having 6 teams and is played on a home-and-away format with half of the teams being private clubs. Later Quartz SC announced its withdrawal from the league making the number of teams 10. The season kicked off on 8 April 2017. KSEB beat FC Thrissur in the finals to clinch their maiden Kerala Premier League Title.