Thrombosis Research is a peer-reviewed medical journal published by Elsevier focusing on thrombosis, hemostasis, and vascular biology. Its impact factor as of 2017 is 2.779. The journal was established in 1972.

Elsevier is a Dutch publishing and analytics company specializing in scientific, technical, and medical content. It is a part of the RELX Group, known until 2015 as Reed Elsevier. Its products include journals such as The Lancet and Cell, the ScienceDirect collection of electronic journals, the Trends and Current Opinion series of journals, the online citation database Scopus, and the ClinicalKey search engine for clinicians. Elsevier's products also include digital tools for data management, instruction, and assessment.

Haemophilia C (also known as plasma thromboplastin antecedent deficiency or Rosenthal syndrome) is a mild form of haemophilia affecting both sexes, due to factor XI deficiency. It predominantly occurs in Ashkenazi Jews. It is the fourth most common coagulation disorder after von Willebrand's disease and haemophilia A and B. In the United States, it is thought to affect 1 in 100,000 of the adult population, making it 10% as common as haemophilia A.

Scopus is Elsevier’s abstract and citation database launched in 2004. Scopus covers nearly 36,377 titles from approximately 11,678 publishers, of which 34,346 are peer-reviewed journals in top-level subject fields: life sciences, social sciences, physical sciences and health sciences. It covers three types of sources: book series, journals, and trade journals. All journals covered in the Scopus database, regardless of who they are published under, are reviewed each year to ensure high quality standards are maintained. Searches in Scopus also incorporate searches of patent databases. Scopus gives four types of quality measure for each title; those are h-Index, CiteScore, SJR and SNIP.

The SSRN, formerly known as Social Science Research Network, is both a repository for preprints and international journal devoted to the rapid dissemination of scholarly research in the social sciences and humanities and more. Elsevier bought SSRN from Social Science Electronic Publishing Inc. in May 2016.

The International Association for Hydro-Environment Engineering and Research (IAHR), founded in 1935, is a worldwide, non-profit, independent organisation of engineers and water specialists working in fields related to the hydro-environment and in particular with reference to hydraulics and its practical application. IAHR was called the International Association of Hydraulic Engineering and Research until 2009.

The Journal of Monetary Economics is a peer-reviewed academic journal covering research on macroeconomics and monetary economics. It is published by Elsevier and was established in October 1973 by Karl Brunner and Charles I. Plosser. Beginning in 2002, it was merged with the Carnegie-Rochester Conference Series on Public Policy. The latter series was established in 1976 and had been published independently, originally by the North-Holland Publishing Company, now an imprint of Elsevier. According to the Journal Citation Reports, the journal has a 2014 impact factor of 1.726. Since 2014, its editors are Urban Jermann and Yuriy Gorodnichenko. It is widely regarded as one of the most prestigious academic journals in economics and consistently ranked as top 10 among all economics journals.

The American Journal of Kidney Diseases (AJKD) is a monthly peer-reviewed medical journal covering all aspects of nephrology. It is the official journal of the National Kidney Foundation and is published by Elsevier. The journal publishes original research, case reports, and educational articles such as narrative reviews and teaching cases. It is abstracted and indexed in PubMed/MEDLINE/Index Medicus. According to the Journal Citation Reports, the journal has a 2016 impact factor of 7.62. The journal's current editor-in-chief is Harold I. Feldman. Since November 2011, the journal publishes a blog, AJKD Blog, which posts interviews with authors, commentaries, and educational material approximately twice per week.

Analytica Chimica Acta is a peer-reviewed scientific journal published since 1947 that covers original research and reviews of fundamental and applied aspects of analytical chemistry.

Advances in Space Research (ASR) is a peer-reviewed scientific journal that is published 27 times per year by Elsevier. It was established in 1981 and is the official journal of the Committee on Space Research (COSPAR). The editor-in-chief is Pascal Willis.

Beverley Jane Hunt is professor of thrombosis and haemostasis at King's College, London, consultant in the departments of haematology, rheumatology and pathology and director of the Haemostasis Research Unit at Guy's and St Thomas' Foundation Trust, medical director of Thrombosis UK and previous president of Walthamstow Hall Old Girls Association. She was educated at Walthamstow Hall and University of Liverpool.

Pump thrombosis (PT) is considered a specific case of a major device malfunction, and is classified as either suspected or confirmed pump thrombus. Typically, the device is an implanted blood pump such as a Left ventricular assist device. The malfunction is a blockage in the flow of blood anywhere along a vessel and it is mainly due to the bio-incompatible presence of a fairly complex mechanical apparatus. Pump thrombus is dreaded complication of CF LVAD technology that can require repeat surgery to replace the pump or lead to death. 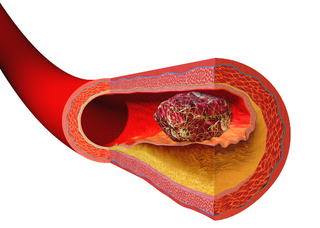 Energy Research & Social Science is a prestigious peer-reviewed academic journal covering social science research on energy systems and energy and society, including anthropology, economics, geography, psychology, political science, social policy, sociology, science and technology studies and legal studies. It was established in 2014 and is now among the most highly ranked journals on energy and social sciences.. It is published by Elsevier. The editor-in-chief is Benjamin K. Sovacool.

Thrombosis and Haemostasis is a peer-review scientific journal of medicine. It is published by Thieme Medical Publishers. It is the official journal of several groups and societies: European Society of Cardiology, Sociedad Española de Trombosis y Hemostasia, Australian Vascular Biology Society, and Gesellschaft für Thrombose- und Hämostaseforschung e.V. A related publication is TH Open. The journal was established in 1957 and is published monthly. The current editors-in-chief are Christian Weber and Gregory Y. H. Lip.