Throne of a Thousand Years

Throne of a Thousand Years is a non-fiction book by author Jacob Truedson Demitz, [1] first published in 1996 as the first English-language historical account solely about all the kings and queens of Sweden. [2] [3] and again as Centuries of Selfies in 2020.

It details their personal histories, the impact of their reigns on Scandinavian history, and the political implications of disclosed dynastic ties in Europe.

Sponsored mainly by Ericsson, ABB and the Swedish Postal Service, the 1996 account was published by Ristesson Ent in Ludvika and Los Angeles. A fictional chronicler called Erik, Son of Riste related the factual story, followed by fact boxes about each of the 66 monarchs covered and a number of ancestry charts. Illustrations in that early version (if not otherwise noted in the book) are portrait drawings by the author made from the 1960s to the 1990s, [4] and 3 differently sorted lists of persons were included as well as an appended text rendition in Swedish.

Throne of a Thousand Years was particularly praised by Dala-Demokraten for its English-language name forms, exonyms for pre-20th-century Swedish royalty, and a "refreshing" lack of nationalism, [5] and by Nya Ludvika Tidning for its general interest and for easy access to hard-to-find facts. [3]

Making extensive use of recent donations by the National Museum of Sweden to Wikimedia Commons, and crediting that museum for them, a new full color edition called Centuries of Selfies was published in 2020 with a preface by Ulf Sundberg. [6] [7] In the updated version's historical account, Erik, Son of Riste has been excluded, whereas comprehensive new chapters covering the royal dynasties and burials, respectively, have been added to the book. [8]

Olof Skötkonung, sometimes stylized as Olaf the Swede, was King of Sweden, son of Eric the Victorious and, according to Icelandic sources, Sigrid the Haughty. He succeeded his father in c. 995. He stands at the threshold of recorded history, since he is the first Swedish ruler about whom there is substantial knowledge. He is regarded as the first king known to have ruled both the Swedes and the Geats. In Sweden, the reign of king Olov Skötkonung is considered to be the transition from the Viking age to the Middle Ages, because he was the first Christian king of the Swedes, who were the last to adopt Christianity in Scandinavia. He is associated with a growing influence of the church in what is today southwestern and central Sweden. Norse beliefs persisted in parts of Sweden until the 12th century. 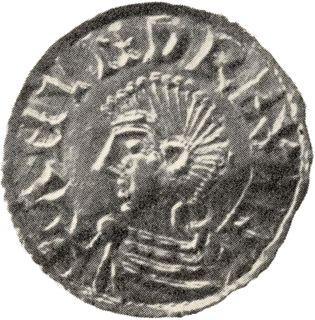 The House of Munsö, also called the House of Björn Ironside, the House of Uppsala or simply the Old dynasty, is the earliest reliably attested royal dynasty of Sweden, ruling during the Viking Age. None of the names suggested for the dynasty are universally accepted and most are problematic; the name "House of Munsö" derives from a questionable and speculative theory that they would have ruled from the island of Munsö and the name "House of Björn Ironside" derives from the supposed founder of the dynasty, Björn Ironside, who is often seen as a legendary, rather than historical, figure. 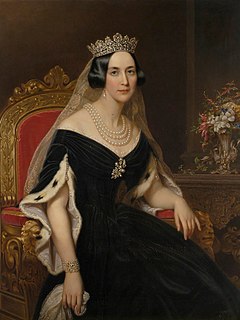 Joséphine of Leuchtenberg or Joséphine de Beauharnais was Queen of Sweden and Norway as the wife of King Oscar I. She was also Princess of Bologna from birth and Duchess of Galliera from 1813. She was regarded as politically active during the reign of her spouse and acted as his political adviser, actively participating in government affairs. She is acknowledged as having introduced more liberal laws regarding religion. 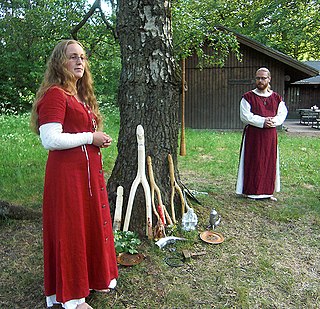 The Community of Forn Sed Sweden, formerly the Swedish Asatro Community is a heathen organization founded in 1994.

Hans Sebastian Pasquale Fronda is a Swedish hip-hop artist. He released his first studio album in 2004, and toured Sweden in summer 2006. He then took a time-out from doing live performances to work on his next album, Fridlysta Frekvenser. The first single from that album was released on April 11, 2007. He made his stage comeback on the televised radio-show Radiogalan on April 29, 2007, along with Markoolio, Emilia Rydberg, and Sunrise Avenue.

Nyamko Ana Sabuni is a Swedish politician who has been Leader of the Liberals since June 2019. She previously served as Minister for Integration from 2006 to 2010 and as Minister for Gender Equality from 2006 to 2013 in the Swedish government. A member of the Liberal Party, Sabuni was elected a Member of Parliament in 2002. Sabuni made history in June 2019 by becoming the first party leader in the Swedish parliament coming from an ethnic minority and the first party leader of a refugee background.

Louise (L) Lidströmer is a Swedish artist who studied at the Royal Swedish Academy of Arts in Stockholm 1967–72. She works with paintings, sculpture and object installation, and has presented large series of exhibitions in and outside Sweden.

Knut Stefan Anderson was a Swedish industrialist, journalist and master craftsman clockmaker/watchmaker decorated with badges of chivalric orders by the Kings of Sweden, Denmark and Norway and the President of Finland. He was the son of August T. Anderson and Hildegard von Reis and began to learn watchmaking in 1892 at age 13 in Norrköping.

Dalarnas Tidningar (DT) is a Swedish media company formed in 1987 through the merger of Falu-Kuriren AB and Dalarnes Tidnings & Boktryckeri AB (DTBAB). Prior to the merger, Falu-Kuriren operated the independent liberal newspaper Falu Kuriren and DTBAB owned the apolitical newspapers Borlänge Tidning, Nya Ludvika Tidning, Mora Tidning, and Södra Dalarnes Tidning. The political leanings of the newspapers were maintained after the merger and through to the current day. 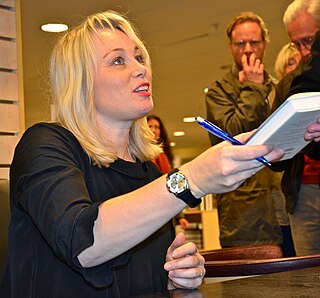 Ann Helen Heberlein is a Swedish academic and author, who writes extensively on theology and ethics. She is best known for her autobiographical account of life with bipolar disorder, Jag vill inte dö, jag vill bara inte leva.

Hanna Lovisa Stjärne is a Swedish journalist and media executive. In September 2014 she was announced as the new CEO for Sveriges Television (SVT), succeeding the resigning CEO Eva Hamilton.

Dik Manusch was a street newspaper published in northern Sweden. First published in early 2015 and focused on the Västerbotten province, the newspaper aimed to help homeless European Union migrants – who are primarily Romani people from the Balkans, especially Romania – to support themselves by providing an alternative to begging on the streets. Distributed for free to the migrants, each newspaper was sold for 50 Swedish krona, the profits going entirely to the seller. A second purpose was to create a debate in Swedish society about the conditions faced by these people. 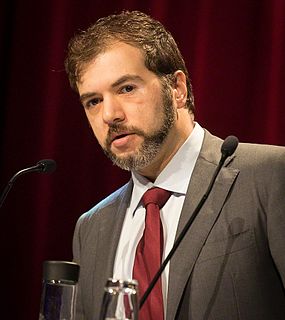 Tino Sanandaji is a Kurdish-Swedish economist and author born in Tehran, Iran, who resides in Stockholm, Sweden. 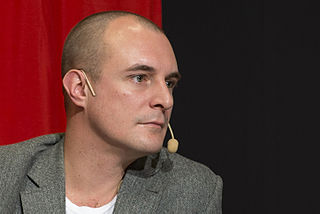 Johan Niklas Börje Hilton, is a Swedish journalist and author.

Gunhild Kyle was a Swedish historian. She was Sweden's first professor of women's history at the University of Gothenburg. 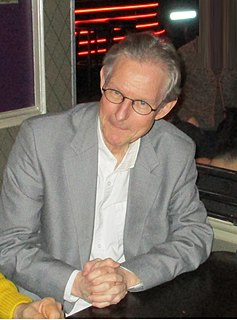 Ulf Eskil Erik Sundberg is a Swedish economist, historian and author of books and magazine articles.

The following is a timeline of minor events between January and mid-March in the COVID-19 pandemic in Sweden.

Tove Cecilia Meyer is a Swedish poet, writer and journalist.