Thryssocypris is a genus of cyprinid fish found in Southeast Asia. 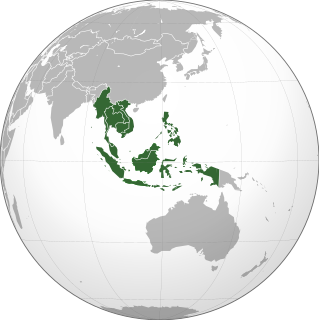 Southeast Asia or Southeastern Asia is a subregion of Asia, consisting of the countries that are geographically south of Japan, Korea and China, east of India, west of Papua New Guinea, and north of Australia. Southeast Asia is bordered to the north by East Asia, to the west by South Asia and the Bay of Bengal, to the east by Oceania and the Pacific Ocean, and to the south by Australia and the Indian Ocean. The region is the only part of Asia that lies partly within the Southern Hemisphere, although the majority of it is in the Northern Hemisphere. In contemporary definition, Southeast Asia consists of two geographic regions:

There are currently four recognized species in this genus: [1] [2]

Tyson Royal Roberts is an American ichthyologist. He has been described as "the world's foremost authority on Regalecus".

The Cyprinidae are the family of freshwater fishes, collectively called cyprinids, that includes the carps, the true minnows, and their relatives. Also commonly called the "carp family", or "minnow family", Cyprinidae is the largest and most diverse known fish family and the largest vertebrate animal family in general, with about 3,000 living and extinct species but only 1,270 remain extant. They range from about 12 mm to 3meters Catlocarpio siamensis. This certain family of fish is one of the only that do not take care of their eggs. In about 370 genera. The family belongs to the ostariophysian order Cypriniformes, of whose genera and species the cyprinids make more than two-thirds. The family name is derived from the Ancient Greek kyprînos.

Devario is a genus of fish in the family Cyprinidae native to the rivers and streams of South and Southeast Asia. These fishes have short barbels and many species having vertical or horizontal stripes. These species consume various small, aquatic insects, crustaceans and worms, as well as, in the case of fry, plankton. 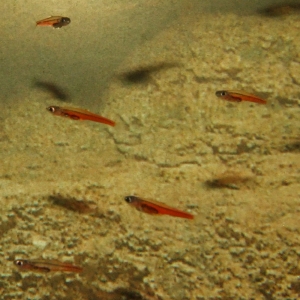 Paedocypris is a genus of tiny cyprinid fish found in swamps and streams on the Southeast Asian islands of Borneo, Sumatra and Bintan.

Balantiocheilos is a small genus of cyprinid fish from southeast Asia. It includes two species.

Chaca is the only genus in the catfish family Chacidae. These fish are commonly known as squarehead catfishes, frogmouth catfishes, or angler catfishes. These unusual fish have a sedentary lifestyle and spend much of their time motionless.

Barbodes is a genus of small to medium-sized cyprinid fish native to tropical Asia. The majority of the species are from Southeast Asia. Many species are threatened and some from the Philippines are already extinct. A survey carried out in 1992 only found three of the endemic Barbodes species, and only two were found in 2008. Several members of this genus were formerly included in Puntius.

Capoeta, also known as scrapers, is a genus of fish in the family Cyprinidae found in Western Asia. The distribution extends from Turkey to the Levant, to Transcaucasia, Iraq, Turkmenistan and northern Afghanistan. This genus is most closely related to Luciobarbus and in itself is divided into three morphologically, biogeographically and genetically distinct groups or clades: the Mesopotamian clade, the Anatolian-Iranian clade and the Aralo-Caspian clade.

Onychostoma is a genus of cyprinid fish found in eastern Asia.

Poropuntius is a genus of cyprinid fish found mainly in freshwater habitats of Southeast Asia and Yunnan in China, but P. burtoni is from South Asia. Several species have highly restricted ranges and are threatened, and a single P. speleops is a cavefish.

Danio erythromicron, often known as Emerald dwarf danio,emerald dwarf rasbora, is a species of cyprinid fish which is endemic to Inle Lake in Myanmar.

Microdevario is a small genus of danionin cyprinids. It was recently described to include species previously in the genus Microrasbora. These small freshwater fish are native to Burma (Myanmar) and adjacent parts of Thailand, and reach up to 1.5–2.3 cm (0.6–0.9 in) in length depending on the exact species involved.

Barilius is a large genus of cyprinid fishes native to Asia. Four species in this genus have been discovered since 2012.

Barbus sperchiensis is a disputed species of cyprinid fish in the genus Barbus. It is a freshwater fish endemic to the Sperchios river complex, Central Greece.

Barbodes colemani is a species of cyprinid fish. It is endemic to Thailand and restricted to the upper Chao Phraya River basin. It is an uncommon species that inhabits streams and river tributaries, occasionally the mainstreams. Its placement in the genus Barbodes is not universally accepted and the Catalog of Fishes places this species in the genus Discherodontus.

The danionins are a group of small minnow-type fish belonging to the family Cyprinidae. Members of this group are mostly in the genera Danio, Devario and Rasbora. They are primarily native to the fresh waters of South and Southeast Asia, with fewer species in Africa. Many species are brightly coloured and are available as aquarium fish worldwide. Danio species tend to have horizontal stripes, rows of spots, or vertical bars, and often have long barbels. Devario species tend to have vertical or horizontal bars, and short rudimentary barbels, if barbels are present at all. All danionins are egg scatterers and breed in the rainy season in the wild. They are carnivores living on insects and small crustaceans. 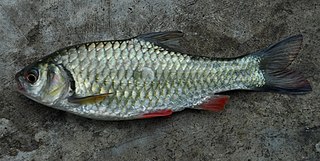 Fangfangia spinicleithralis is a species of cyprinid fish endemic to Indonesia where it is found in the peat swamp forests of Kalimantan Tengah, Borneo. It is the only member of its genus. The genus name Fangfangia honors the Chinese-Swedish ichthyologist Fang Fang Kullander (1962-2010), who specialized in the study of cyprinid fishes.

Laubuka is a genus of cyprinid fish found in South and Southeast Asia.