Thug Life was an American hip hop group that consisted of Tupac, Big Syke, Mopreme, Macadoshis, and The Rated R. They released one album, 1994's Thug Life: Volume 1 , before disbanding in 1995.

According to Tupac, the name originally started as an acronym: "The Hate U Give Little Infants Fucks Everybody". It represented the idea that the racism and marginalization experienced by black youth ends up negatively affecting society. [1]

The first single and video was "Pour Out a Little Liquor" (which originally appeared on the Above the Rim soundtrack, released six months earlier), which was a Tupac solo song.

Tupac performed "Out on Bail" at the 1994 Source Awards. [3] The album was originally released on Shakur's label Out Da Gutta. Tupac's mother's label, Amaru Entertainment, has since gained the rights to the album.

The track "How Long Will They Mourn Me?" appeared on Tupac's 1998 Greatest Hits album.

On November 30, 1995, Stretch died after being shot four times in the back by three men who pulled up alongside his minivan in Queens Village. [5] He was killed exactly one year after 2Pac's 1994 Quad Studio shooting. [6]

Maurice Harding, better known by his stage name Mopreme Shakur, originally known as Wycked, is an American rapper. He was a member of the hip-hop group Thug Life and is the stepbrother of Tupac Shakur. He was also a member of the Outlawz, but later dropped out because of a financial disagreement with Death Row Records. 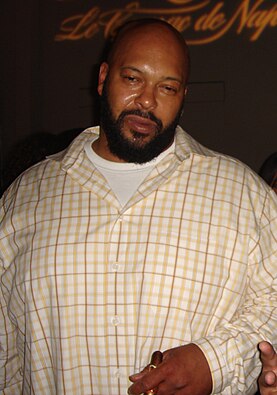 The East Coast–West Coast hip hop rivalry was a feud between artists and fans of the East Coast hip hop and West Coast hip hop scenes in the United States, especially from the mid-1990s. Focal points of the feud were East Coast–based rapper The Notorious B.I.G. with Puff Daddy and their New York City–based label, Bad Boy Records, and West Coast–based rapper Tupac Shakur with Suge Knight and their Los Angeles-based label, Death Row Records. The feud culminated in the murders of both rappers in drive-by shootings. Although several suspects have been identified, both murders remain unsolved. 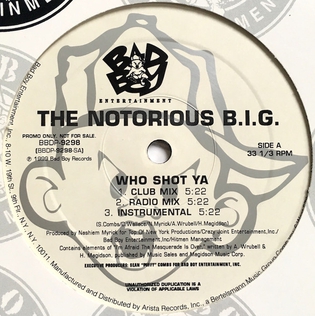 "Who Shot Ya" or often "Who Shot Ya?" is a song by Brooklyn, New York, rapper the Notorious B.I.G., also called Biggie Smalls, backed by Sean Combs as the "hype man". Puffy's emerging record label, Bad Boy Entertainment, released it on February 21, 1995, on an alternate reissue of Biggie's single "Big Poppa/Warning," out since December 5, 1994. While this 1994 release climbed the Billboard Hot 100, its new B side "Who Shot Ya"—now Biggie's "most infamous classic," with an instrumental now iconic—revised some vocals of a "Who Shot Ya" track, rapped by Biggie and Keith Murray, already issued on a mixtape from a Harlem DJ earlier in 1995. Recalled as "menacing magic" that helps "define New York rap," "Who Shot Ya" was "controversial and hugely influential." Widely interpreted as a taunt at 2Pac, the single provoked a "rap battle" between the two rappers, formerly friends.

″Cradle to the Grave″ is a song by American hip hop recording artist 2Pac and his group, Thug Life, released on November 4, 1994 as a single from their one and only album, Thug Life Vol. 1 (1994). It is one of the few songs from the album that made it to the charts, peaking at number 25 on the Billboard Hot Rap Singles and number 91 on the Billboard Hot R&B/Hip-Hop Singles & Tracks charts respectively.