Tamil Nadu, formerly Madras State, is one of the 28 states of India. Its capital and largest city is Chennai. Tamil Nadu lies in the southernmost part of the Indian subcontinent and is bordered by the union territory of Puducherry and the South Indian states of Kerala, Karnataka, and Andhra Pradesh. It is bounded by the Eastern Ghats on the north, by the Nilgiri Mountains, the Meghamalai Hills, and Kerala on the west, by the Bay of Bengal in the east, by the Gulf of Mannar and the Palk Strait on the southeast, and by the Indian Ocean on the south. The state shares a maritime border with the nation of Sri Lanka. 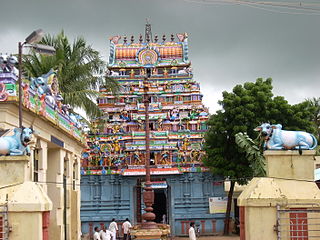 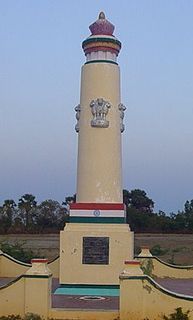 Vedaranyam is a town in Nagapattinam district in the Indian state of Tamil Nadu. The town is named after the presiding deity of the Vedaranyeswarar Temple. The recorded history of Vedaranyam is known from medieval Chola period of the 9th century and has been ruled, at different times, by the Medieval Cholas, Later Cholas, Later Pandyas, Vijayanagar Empire and the British. During India's independence struggle, C. Rajagopalachari, who would later become independent India's first Governor-General, launched a salt march in Vedaranyam parallel to the Dandi March launched by Gandhi in 1930 to protest against the sales tax levied on salt extraction.

Muthupet is a panchayat town in Thiruvarur district in the Indian state of Tamil Nadu.Muthupet is also known as Pearlpet. Muthupet comes under the Thiruthuraipoondi assembly constituency which elects a member to the Tamil Nadu Legislative Assembly once every five years Current MLA is Adalarasan From Dmk and it is a part of the Nagapattinam which elects its Member of Parliament (MP) once in five years. The town is administered by the Muthupet town panchayat

Nagapattinam is a town in the Indian state of Tamil Nadu and the administrative headquarters of Nagapattinam District. The town came to prominence during the period of Medieval Cholas and served as their important port for commerce and east-bound naval expeditions. The Chudamani Vihara in Nagapattinam constructed by the Srivijayan king Sri Mara Vijayattungavarman of the Sailendra dynasty with the help of Rajaraja Chola I was an important Buddhist structure in those times. Nagapattinam was settled by the Portuguese and, later, the Dutch under whom it served as the capital of Dutch Coromandel from 1660 to 1781. In November 1781, the town was conquered by the British East India Company. It served as the capital of Tanjore district from 1799 to 1845 under Madras Presidency of the British. It continued to be a part of Thanjavur district in Independent India. In 1991, it was made the headquarters of the newly created Nagapattinam District. Nagapattinam is administered by a Selection-grade municipality covering an area of 17.92 km2 (6.92 sq mi) and had a population of 102,905 as of 2011.

Kodiakkarai also called Point Calimere or Cape Calimere,, is a low headland on the Coromandel Coast, in the Nagapattinam district of the state of Tamil Nadu, India. It is the apex of the Cauvery River delta, and marks a nearly right-angle turn in the coastline. The region is located about 9 kilometres southerly to Vedaranyam. The antiquity of the region is evident by the extant Kodi Kuzhagar temple of Chola pediod. Also, a historic landmark here was the Chola lighthouse, destroyed in the tsunami of 2004.

Point Calimere Wildlife and Bird Sanctuary (PCWBS) is a 21.47-square-kilometre (8.29 sq mi) protected area in Tamil Nadu, South India along the Palk Strait where it meets the Bay of Bengal at Point Calimere at the southeastern tip of Nagapattinam District. The sanctuary was created in 1967 for conservation of the near threatened blackbuck antelope, an endemic mammal species of India. It is famous for large congregations of waterbirds, especially greater flamingos. International name: Point Calimere Wildlife Sanctuary, IBA Code: IN275, Criteria: A1, A4i, A4iii. The 7-square-kilometre (2.7 sq mi) core area of this sanctuary has been proposed as a National Park

Thalainayar is a panchayat town in Nagapattinam district in the Indian state of Tamil Nadu. It is near Vedaranyam. It is famous for its Agraharam street, which has a Ram and Siva temple.

Naluvedapathy is a coastal village in the Indian state of Tamil Nadu. It is located in the Vedaranyam taluk of the Nagapattinam district. It sits on the mouth of the Addapar River. Based on the 2001 census in India and numerous village and tsunami censuses after the 2004 Indian Ocean tsunami, it has a population of approximately 4500 people, most of whom lower middle class and intermediate caste. The village's primary businesses, like other villages on the coast of Tamil Nadu, are farming and fishing. The entire Nagapattinam district was severely affected by the Indian Ocean tsunamis, however, Naluvedapathy emerged virtually unscathed. This was due to the presence of a very large windbreak planted by inhabitants of the region in 2002.

State Highway 49, also known as East Coast Road (ECR), is a two-lane highway in Tamil Nadu, India, built along the coast of the Bay of Bengal, Bay of Bengal connecting Tamil Nadu's state capital city Chennai with Cuddalore via Pondicherry. The East Coast Road has been extended up to Kanyakumari via Chidambaram, Sirkali, Akkur, Tharangambadi, Karaikal, Nagore, Nagapattinam, Thiruthuraipoondi, Muthupet, ][ (Adirampattinam)] (Pattukkottai), Manora, Manamelkudi, Mimisal, Ramanathapuram, Koodankulam, Tuticorin. The total length of the road is about 800 km between Chennai and Kanyakumari.

Pushpavanam is a seaside village in Vedaranyam subdistrict in Nagapattinam District in the Indian state of Tamil Nadu. It is approximately 10.3 km (6.4 mi) north of the town of Vedaranyam. As of 2001 census, it had a population of 6,250 in 1,591 households.

Thopputhurai, formerly known as Sethumadavapuram, is a town on the south eastern coast of Nagapattinam District, Tamil Nadu, India.

Katharipulam is a village in south India, under the administration of the Vedaranyam taluk, and located in the Nagapattinam District in the state of Tamil Nadu. The local language is Tamizh. The village population is about 3000, and the village occupies an area of around 25 km². It is about 10 km north west of Vedaranyam and about 35 km south of Velankanni Town, a famous Christian holy place. The postal index number (PIN) is 614808.

Nagapattinam is a Lok Sabha constituency in Tamil Nadu. The seat is reserved for scheduled castes. Dalit agricultural workers form a large part of the electorate in the constituency. The constituency is noted for being an historically communist stronghold, having elected Communist Party of India parliamentary representative seven times.

Kovilpathu is a village in the Vedaranyam taluk of Nagapattinam district, Tamil Nadu, India. Current Panchayath president is Aanandhi Sarabojirajan. The name Kovil pathu name comes from ‘Kuvalai Pathiram’. In the Mahabharata, rishi Durvasa came to the residence of the Pandava to have lunch. But the Akshaya Patra, the vessel that could provide unlimited food, had one limitation that it could be used only once a day, and it had beeen done so. Draupadi, not knowing what to do, prayed to Krishna who took from the pot, a single grain of rice and ate it. Since the rice was offered with genuine devotion, Krishna’s stomach was completely filled by just that one grain of rice, and so was Durvasa’s stomach.

Vedaranyam taluk is a taluk of Nagapattinam district of the Indian state of Tamil Nadu. The headquarters of the taluk is the town of Vedaranyam

Vedaranyam block is a revenue block in Nagapattinam district, Tamil Nadu, India. There are a total of 36 panchayat villages in this block.

Thakattur is a village in Nagapattinam district in the Indian state of Tamil Nadu. It is located about 10 miles (16 km) northwest of Vedaranyam.

Thulasiypattinam also spelt Thulajapattinam in the records of British India. This village is governed by Vanduvanchery Panchayat coming in Vedaranyam Taluk, Nagapattinam District of Tamil Nadu, India. Vedaranyam is the revenue headquarters of this village, located on the route of Vedaranyam to Muthupettai and this is surrounded by two towns namely Thiruthuraipoondi and Vedaranyam. A delta river (Valavanaru) running west side of this village. Hindu and Muslims are the majority people residing in this village.