Thumb Drift is a 2016 racing video game where the player has to control a car to avoid hitting obstacles or the edge of the track using their thumb. [1] Created by Australian developer SMG Studios, it was first released for iOS with an Android release following soon after. [2] 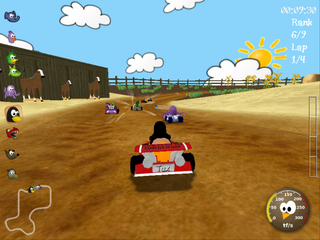 The racing video game genre is the genre of video games, either in the first-person or third-person perspective, in which the player partakes in a racing competition with any type of land, water, air or space vehicles. They may be based on anything from real-world racing leagues to entirely fantastical settings. In general, they can be distributed along a spectrum anywhere between hardcore simulations, and simpler arcade racing games. Racing games may also fall under the category of sports games.

Android is a mobile operating system developed by Google. It is based on a modified version of the Linux kernel and other open source software, and is designed primarily for touchscreen mobile devices such as smartphones and tablets. In addition, Google has further developed Android TV for televisions, Android Auto for cars, and Wear OS for wrist watches, each with a specialized user interface. Variants of Android are also used on game consoles, digital cameras, PCs and other electronics.

The gameplay consists of the player drifting a car along different tracks. [1] This is done by the player dragging their finger left or right causing the back of the car to move in that direction. [3] There are coins on the track which the player can collect. [4] These coins can be spent on buying new cars for the player to play the game with. [3] If the player collides with the edge of the track or an obstacle the game is over. [1]

Thumb Drift received generally positive reviews. TouchArcade gave the game 4.5 stars, the only criticism being the replay feature. [2] Gamezebo praised the game for being "simple to learn", and the many unlock-able items in the game while criticizing the game being "frustrating to learn". [1] Apple'N'Apps called the game a "quick burst of fun that just as quickly fades" and gave the game 4.5 out of 5, praising the "fast paced action", "smooth one touch arcade controls" and "great 3D design" while criticizing the layout of the tracks being the same each time, and the lack of more specific objectives. [5] Metacritic gave the game a score of 79 out of 100. [6]

Gamezebo is a website that focuses on editorial coverage of the mobile gaming industry, offering interviews, reviews, previews, strategy guides, and news. It had been centered on casual games, but after a redesign in 2014, the site changed direction to primarily highlight mobile games.

Squids is a tactical role-playing game by the French studio The Game Bakers, released in October 2011 for iOS devices. A sequel was released entitled Squids Wild West, and a spin-off called Squids Odyssey was also released.

Subway Surfers is an endless runner mobile game co-developed by Kiloo and SYBO Games, private companies based in Denmark. It is available on Android, iOS, Kindle, and Windows Phone platforms and uses the Unity game engine. In the game, players take the role of young graffiti artists who, upon being caught in the act of applying graffiti to ("tagging") a metro railway site, where they run through the railroad tracks to escape from the inspector and his dog. As they run, they grab gold coins, power-ups and other items along the way while simultaneously dodging collisions with trains and other objects, and can also jump on top of the trains and surf with hoverboards to evade the capture until the character crashes on an obstacle, getting caught by the inspector or getting hit by a train. Special events, such as the Weekly Hunt, can result in in-game rewards and characters.

Rules! is an iOS game by German indie developer Marcel-André Casasola Merkle and published by TheCodingMonkeys. It was released on August 6, 2014.

Crossy Road is an arcade video game released on 20 November 2014. It was developed and published by Hipster Whale, with the name and concept of the game playing on the joke "Why did the chicken cross the road?" The game has been described as "endless Frogger." 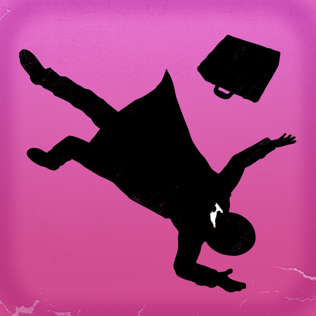 Framed is a multi-award winning noir-puzzle game where the player re-arranges panels of an animated comic book to change the outcome of the story. Developed by the Australian studio Loveshack, Framed is an experience that sees the player changing the order of the narrative-based puzzles to a dance-meets-jazz score.

Mayday! Deep Space is a science fiction video game created by developer Daniel Wilson and published by Iron Cloud Entertainment on January 7, 2015. In the game, the player must use simple voice commands to instruct a man who is stuck on a spaceship full of monsters. As of May 2016, the game is available on the Apple App Store, and an Android version is in development.

Give It Up! is a rhythm video game and platformer for iOS and Android. It was developed by Hungarian indie studio Invictus and released on December 18, 2014. In the game, the player is tasked with controlling a black blob, with simple touch controls. The player must avoid the various obstacles in the game by jumping over them to the beat of a song. A sequel for the game was also created, it was released on October 29, 2015.

Sneaky Sneaky is a stealth video game for iOS and Microsoft Windows. The PC version of the game was released by Naiad Entertainment on November 12, 2014, and the mobile version was released on December 9. The game relies heavily on stealth, so the player must avoid enemies in order to pass some levels, although normal combat can also be used.

PinOut is a virtual pinball game, released in 2016 by Mediocre AB. It is available for Apple iOS and Google Android platforms. The goal of the game is propel the ball as far as possible before time runs out.

Outfolded is a free infinite, minimalistic puzzle game by 3 Sprockets. It was released on IOS. The goal of the game is to unfold various three-dimensional shapes so that after all the shapes have been used, at least one of the shape's sides lands on the goal square.

Worms 4 is a turn-based tactics game made by Team17 released for iOS and Android devices on September 3, 2015. It is the fourth numbered entry in the Worms video game franchise.

Incidence is a minimilist golfing style game by ScrollView Games. It was released on iOS on March 1, 2017.

Causality is a game by British studio Loju. The game is about guiding a group of astronauts to safety. It was released on Steam and later on the iOS App Store.

Perchang is a physics-based game about getting little balls into a funnel. It was released on IOS on June 22, 2016 by Perchang Games.

Bee Leader is a game about collecting the most nectar and turning it into honey before the sun sets. It was released by Flightless.

Golfinity is an endless mini-golf game created by NimbleBit.

Prism is a minimalist puzzle game by Clint Siu which was released on iOS and later released on Android.

Impossible Road is a minimalist video game created by Canadian indie developer Kevin Ng. It was released on iOS on April 9, 2013, and later for Android.

Horizon Chase - World Tour is an arcade racing video game developed and published by Brazilian team Aquiris Game Studio. It was released on August 20, 2015, for iOS and Android. A 3D game, it touts the fact that it has a unique retro aesthetic inspired by 2D, 16-bit titles. It soundtrack has been referred to as "Sega-core", in reference to that publisher's classic racing games, like Top Gear that is largely famous in Brazil.