Gamezebo is a website that focuses on editorial coverage of the mobile gaming industry, offering interviews, reviews, previews, strategy guides, and news. It had been centered on casual games, but after a redesign in 2014, the site changed direction to primarily highlight mobile games.

The site is also referred to by casual game developers and publishers, in regard to their reviews, news and walkthroughs. [2] [3] [4] [5]

Gamezebo was founded in 2006 by Joel Brodie, former head of business development at Yahoo! Games, and over the years has grown to become the leading medium on casual games, with up to 3.5 million page views per day. To cope with the shift from casual games to social games, the Gamezebo-website was given a large update in February 2010. [6]

In 2007, Gamezebo and the Casual Games Association jointly launched the Zeebys, a set of awards recognizing the best in casual games each year. The awards are divided into two categories: the People's Choice Awards are voted on by the general public, while the Craft Awards are voted on by registered members of the Casual Games Association. The Zeeby award winners for 2006 were announced in Amsterdam, Netherlands as part of CGA Europe: West 2007. [7]

In 2008, Gamezebo was nominated for a Webby Award by the International Academy of Digital Arts and Sciences in the category of Best Video Games-related website. [8]

Collapse! is a series of award-winning tile-matching puzzle video games by GameHouse, a software company in Seattle, Washington. In 2007, Super Collapse! 3 became the first game to win the Game of the Year at the inaugural Zeebys. The series has been discontinued since 2015 due RealNetworks shutting down its internal games studio.

Gamasutra is a website founded in 1997 that focuses on all aspects of video game development. It is owned and operated by UBM Technology Group, a division of UBM and acts as the online sister publication to the print magazine Game Developer. 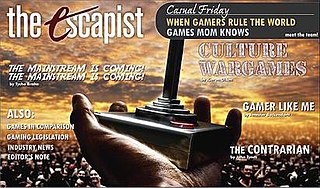 Escapist Magazine is an American video game website and online magazine. First published as a weekly online magazine by Themis Media on July 12, 2005, The Escapist eventually pivoted to a traditional web journalism format and became well-known for a roster of popular video series.

Boonty is a global supplier of digital distribution services for online and PC gaming whose technology platform and brand names were acquired by digital commerce provider Nexway in January 2009.

Big Fish Games is a casual gaming company based in Seattle, with a regional office in Oakland, CA, owned by Aristocrat Leisure. It is a developer and distributor of casual games for computers and mobile devices. Their game Cooking Craze was awarded the Best Pick Up and Play game by Google Play in 2017.

Epicurious is a digital brand for consumers interested in food and cooking-related topics. The website was created by Condé Nast in 1995 and is part of the publisher's Food Innovation Group. Epicurious also serves mobile content through apps available across multiple platforms, including Android, Windows, and iOS phones and tablets, as well as the Apple Watch.

Joel Breton is an American video game producer, video game designer, film producer and entrepreneur. He has worked as a producer on multiple award-winning video games, including Unreal PC, Bomberman Live, and Pirates of the Caribbean. In 2016, Breton became the head of virtual reality content for HTC Vive, where he manages both internal and external content development for the HTC Vive virtual reality platform. In October 2018, Breton premiered the world's first feature length VR film, 7 Miracles, at the Raindance Film Festival, where it won the VR Film of the Festival award.

Jay Is Games is a game review website that features daily updates and links to casual games, indie games, browser games and flash games of wide interest to casual gamers. It was founded on April 19, 2003 by Jay Bibby, initially as a personal blog, although it later had several contributors.

Awem Games is a casual games developer based in Mogilev, Belarus. Awem Games are distributed by key digital game sellers such as AppStore, Google Play, Bigfish games and GameHouse and many others. Besides on-line distribution, games are available on CD in 24 countries such as the United States, Germany, Austria, Russia, Poland and other. Games are translated to 15 languages.

Dream Chronicles, originally titled Dream Chronicles: The Endless Slumber, is an adventure, hidden object, and puzzle casual game developed by KatGames and published by PlayFirst. It is the first installment in the series. Set in a mystical world where mortal and fairy realms collide, the game tells the story of a mortal woman named Faye who is the only being able to awaken from a powerful fairy's dream spell. She embarks on an adventure through a dream world to find her fairy husband and save her hometown. To solve the mystery, players must complete puzzles and search for clues leading to the whereabouts of Faye's husband.

Alawar is a Russian company engaged in developing, distributing and publishing video games for PC, mobile platforms and other devices.

Destructoid is a website that was founded as a video game-focused blog in March 2006 by Yanier Gonzalez, a Cuban-American cartoonist and author. It is part of the Enthusiast Gaming network.

FreshGames was a Columbus, Ohio based publisher and developer of casual, hand-held, and mobile games. It was formed in early 2002 by a group of gaming industry gamers. This new type of video game genre soon after became known as Casual Games.

Melesta Games is a casual games developer. The company was founded in 2008. Nowadays it develops games across multiple platforms like PC, iOS, Android, Windows phone, Mac, social, video game consoles, etc. Company's product portfolio includes more than 20 games,that have been localized into 20+ languages and are available in 60 countries worldwide.

FTX Games is a global publisher of mobile games based on major entertainment properties. Originally founded as Funtactix in 2006, the company was acquired by Playtech in March 2016 and rebranded as FTX Games.