Thunder and Lightning are a duo of superpowered brothers published by DC Comics that had encounters with the Teen Titans.

They are not to be confused with the two superheroines Thunder and Lightning, sisters introduced at different times who are the daughters of Black Lightning.

Thunder and Lightning first appeared in New Teen Titans #32 and was created by Marv Wolfman and George Pérez. [1]

Gan and Tavis Williams are twin brothers that were born of an unnamed Vietnamese woman and an American soldier named Second Lt. Walter Williams. Originally conjoined twins, they were separated with magic. As children, they found themselves beginning to manifest superpowers, but they had little control over these powers, and without an infusion of their father's blood, they would quickly burn themselves out. So, they took the aliases Thunder and Lightning, respectively, and set off to America to search for their father. They caused major disturbances in St. Louis and engaged in battle against the Teen Titans. However, after their aims were revealed, the Titans decided to help the pair. [2]

Thunder and Lightning resettled in San Francisco, where S.T.A.R Labs helped them control their powers. While there, they helped stop the Atomic Skull. [4] They worked as security guards for S.T.A.R. until Trigon briefly took control of them. They were captured and held in stasis at S.T.A.R. Labs until they could be free from the demon seeds. [5]

At some point they were freed of the seeds, as the two of them later returned to help the Titans battle the Justice League, via transport arranged from the ultra-powerful Cyborg. Thunder and Lightning came in too late to actually fight any of the Justice League but they still assisted in neutralizing the threat posed by Cyborg. After that, they returned to Southern Vietnam to defend it from an unknown alien threat. [6]

During the "Infinite Crisis" storyline, they were subdued by the League of Assassins in Vietnam who were being paid to break open a prison as part of a worldwide scheme to attack Metropolis with dozens of supervillains. [7]

During the Salvation Run storyline, Thunder and Lightning arrive to give food to Martian Manhunter. Martian Manhunter asks why they are here on this planet. When they offered to help Martian Manhunter, Bane attacks them. Despite being shocked by Lightning, Bane defeats the both of them as Lex Luthor arrives. [8] Luthor keeps the two alive, later using them as power sources for his teleporter. The two are seemingly killed when the teleporter device self-destructs. [9]

In September 2011, The New 52 rebooted DC's continuity. In this new timeline, Thunder and Lightning are reintroduced as part of The Ravagers, a superhero team which also includes Beast Boy, Terra, Ridge, and Fairchild. [10]

Thunder is able to control thunder as he manifests as rumbling noises which he can control to varying degrees. Lightning is able to release bolts of electricity and harness lightning. The two have a psychic link that allows them to communicate with each other.

An unrelated Thunder and Lightning appeared as Superman villains in Superman #303 (September 1976). These were actually two entities in the body of a sentient android used by a super-villain called Whirlicane (who had previously fought Superman in Action Comics #457), who wanted to conduct a series of terror acts across the US. Not knowing about his android origin, Thunder/Lightning hoped for his release by Whirlicane when his tasks were finally fulfilled, but then Superman exposed the truth. Going mad over the realization, Thunder/Lightning released a massive lightning burst, destroying himself, Whirlicane and his base; Superman escaped unscathed. [11]

Alexander Joseph Luthor is a fictional supervillain appearing in publications by the publisher DC Comics. The character was created by Jerry Siegel and Joe Shuster. Lex Luthor originally appeared in Action Comics No. 23. He has since endured as the archenemy of Superman.

Cyborg is a fictional superhero appearing in American comic books published by DC Comics. The character was created by writer Marv Wolfman and artist George Pérez and first appears in a special insert in DC Comics Presents #26. Originally known as a member of the Teen Titans, Cyborg was established as a founding member of the Justice League in DC's 2011 reboot of its comic book titles.

In DC Comics' DC Universe, a metahuman is a human with superpowers. The term is roughly synonymous with both mutant and mutate in the Marvel Universe and posthuman in the Wildstorm and Ultimate Marvel Universes. In DC Comics, the term is used loosely in most instances to refer to any human-like being with extranormal powers and abilities, be they cosmic, mutant, science, mystic, skill or tech in nature. A significant portion of these are normal human beings born with a genetic variant called the "metagene", which causes them to gain powers and abilities during freak accidents or times of intense psychological distress.

Manchester Black is a fictional character in American comic books published by DC Comics, in particular those featuring Superman. He was created by Joe Kelly and Doug Mahnke in Action Comics #775. Introduced as an antihero, the character later becomes a supervillain. 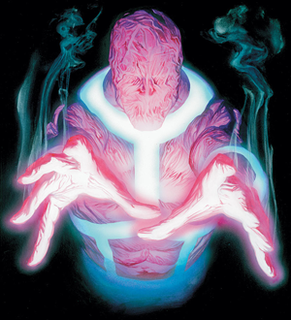 Parasite is the name of several supervillains appearing in American comic books published by DC Comics. Each version of the character has the ability to temporarily absorb the life-energy, superpowers, and knowledge of their victim. The most recurring Parasite is Rudolph "Rudy" Jones, who is a main adversary of Superman and belongs to the collective of enemies that make up his rogues gallery. In 2009, Parasite was ranked as IGN's 61st Greatest Comic Book Villain of All Time.

Livewire is a fictional supervillainess appearing in comic books published by DC Comics. Originally created for Superman: The Animated Series, the character appeared in March 1997 in Superman Adventures #5. Her first mainstream comic book appearance was in Action Comics #835.

Starro is a fictional supervillain that appears in comic books published by DC Comics. The character first appeared in Brave and the Bold #28, and was created by Gardner Fox and Mike Sekowsky.

The Secret Society of Super Villains (SSoSV) is a group of supervillains appearing in comic books published by DC Comics. First introduced in their own eponymous series with issue #1, the group consists of various enemies of the members of the Justice League of America.

Brain is a fictional character, a supervillain appearing in American comic books published by DC Comics commonly as a frequent enemy of the Doom Patrol. He is a French mastermind and criminal genius.

Atomic Skull is a fictional supervillain in DC Comics, who is commonly a foe of Superman. The character first appeared in 1978.

Superboy is a fictional superhero appearing in American comic books published by DC Comics. A modern variation on the original Superboy, the character first appeared as Superboy in The Adventures of Superman #500, and was created by writer Karl Kesel and artist Tom Grummett.

Phobia is a fictional DC Comics supervillain of the New Teen Titans.

Psimon is a fictional supervillain appearing in comic book published by DC Comics. 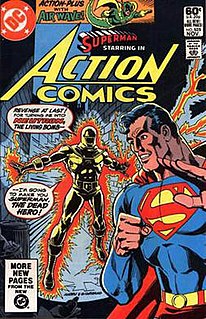 Neutron is a fictional comic book supervillain in the DC Universe, appearing usually as an adversary of Superman.

"Silver Age" was a twelve part storyline that ran through a series of one shot comic books published by DC Comics in 2000. 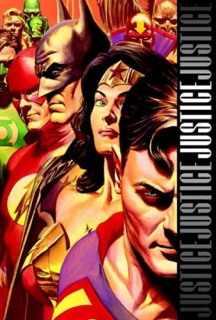 Justice is a twelve-issue American comic book limited series published bimonthly by DC Comics from August 2005 through June 2007, written by Alex Ross and Jim Krueger, with art also by Ross and Doug Braithwaite. Its story involves the superhero team known as the Justice League of America confronting the supervillain team the Legion of Doom after every supervillain is motivated by a shared dream that seems to be a vision of the planet's destruction, which they intend to avoid.

Salvation Run is a seven-issue 2007-2008 DC Comics limited series which was designed to tie into the company's major event series Final Crisis in 2008.