The myth of the epic struggle between Thunderbird and Whale is found in common among different language/cultural groups of the Indigenous peoples of the Pacific Northwest Coast, [1] and seems to be uniquely localized to this area. [2] It is also the major archetypal motif in carvings and painted art, particularly among the natives along the outlying coasts of Vancouver Island, [4] e.g., the Kwakiutl (Kwakwakaʼwakw) [5] or the Nootka (Nuu-chah-nulth) people. [6]

One version can be summarized as follows:

Whale was a monster, killing other whales and depriving the Quileute tribe of meat and oil. Thunderbird, a benevolent supernatural being, saw from its home high in the mountains that the people were starving. It soared out over the coastal waters, then plunged into the ocean and seized Whale. A struggle ensued; the ocean receded and rose again. Many canoes were flung into trees and many people were killed. Thunderbird eventually succeeded in lifting Whale out of the ocean, carrying it high into the air and then dropping it. Then another great battle occurred on the land.[ citation needed ]

The famine experienced on Quileute may not necessarily be blamed on the whales, and Thunderbird makes a gift of a whale, its usual prey to the starving folk, as in a version collected by Ella E. Clark (pub. 1953). [lower-alpha 1] [7]

There are also disparate short pieces of lore which Clark stitches together into one narrative; [8] [7] with the individual pieces resembling the short lore collected by Albert B. Reagan (mostly 1905–1909). [9]

Thus one narrative tells of the Thunderbird pitted against its prey, the whale which kept trying to elude capture, and this escalated to such turmoil that it uprooted trees, and no tree ever grew back again in the area. [10] [8]

Another narrative is the recurrent battle between Thunderbird and the "Mimlos-Whale" aka killer whale which repeatedly escapes to sea after capture, and this struggle resulted in great tremors in the mountains and leveling of trees, offering a mythic explanation of the origin of the Olympic Peninsula prairies. [11]

Some of the lore among the Kwakwakaʼwakw, regarding the Thunderbird's has been collated by Franz Boas. [12] [lower-alpha 2]

But in Boas's version the battle takes place between Thunderbird and Ōʼᵋmät (K!wēʼk!waxāʼwēᵋ),[ what language is this? ] the leader of the animals. The latter retaliates against Thunderbird carrying away one of his sons, by raising an army carried in an artificial whale. In the battle at the village, Thunderbird's four children (named "One-Whale-Carrier", etc.) are drowned, and Thunderbird himself is killed, survived only by the "nine-month old infant in the cradle". [12]

In the 1980s, geologists found evidence that an earthquake, powerful enough to send a tsunami all the way to Japan, hit the American Pacific Northwest in 1700. Some ethnologists believe that "Thunderbird and Whale" is a description of that disaster. [13] [14] 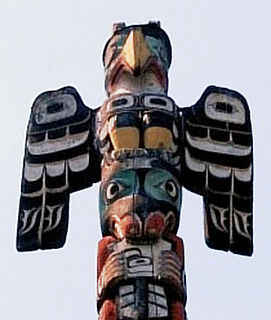 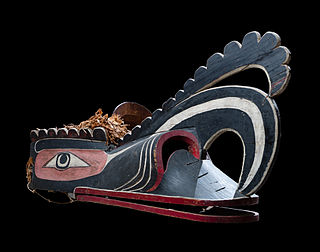 The Kwakwa̱ka̱ʼwakw, also known as the Kwakiutl are Indigenous peoples of the Pacific Northwest Coast. Their current population, according to a 2016 census, is 3,665. Most live in their traditional territory on northern Vancouver Island, nearby smaller islands including the Discovery Islands, and the adjacent British Columbia mainland. Some also live outside their homelands in urban areas such as Victoria and Vancouver. They are politically organized into 13 band governments.

The Quileute, also known as the Quillayute, are a Native American people in western Washington state in the United States, currently numbering approximately 2,000. They are a federally recognized tribe: the Quileute Tribe of the Quileute Reservation. 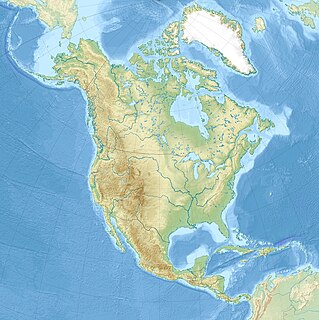 The 1700 Cascadia earthquake occurred along the Cascadia subduction zone on January 26, 1700 with an estimated moment magnitude of 8.7–9.2. The megathrust earthquake involved the Juan de Fuca Plate from mid-Vancouver Island, south along the Pacific Northwest coast as far as northern California. The length of the fault rupture was about 1,000 kilometers, with an average slip of 20 meters (66 ft). 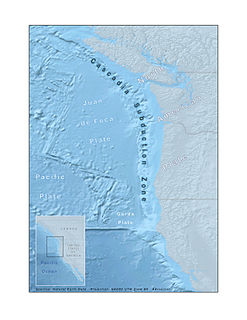 The Cascadia subduction zone is a convergent plate boundary that stretches from northern Vancouver Island in Canada to Northern California in the United States. It is a very long, sloping subduction zone where the Explorer, Juan de Fuca, and Gorda plates move to the east and slide below the much larger mostly continental North American Plate. The zone varies in width and lies offshore beginning near Cape Mendocino, Northern California, passing through Oregon and Washington, and terminating at about Vancouver Island in British Columbia.

Raven Tales are the traditional human and animal creation stories of the indigenous peoples of the Pacific Northwest Coast. They are also found among Athabaskan-speaking peoples and others. Raven stories exist in nearly all of the First Nations throughout the region but are most prominent in the tales of the Tlingit and Tahltan people. 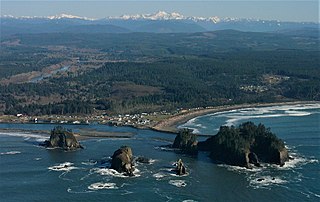 La Push is a small unincorporated community situated at the mouth of the Quillayute River in Clallam County, Washington, United States. La Push is the largest community within the Quileute Indian Reservation, which is home to the federally recognized Quileute tribe. La Push is known for its whale-watching and natural environment. The community has historically been located on the coast, however sea level rise led the community to begin managed retreat to higher grounds in 2017.

Kwakʼwala, or Kwak̓wala, previously known as Kwakiutl, is the Indigenous language spoken by the Kwakwakaʼwakw in Western Canada. Kwakʼwala belongs to the Wakashan language family. There are fewer than 200 fluent Kwakʼwala speakers today, which amounts to 3% of the Kwakwakaʼwakw population. Because of the small number of speakers, most of whom are elders, as well as the fact that very few if any children learn Kwakʼwala as a first language, its long-term viability is in question. However, interest from many Kwakwakaʼwakw in preserving their language and a number of revitalization projects are countervailing pressures which may extend the viability of the language. 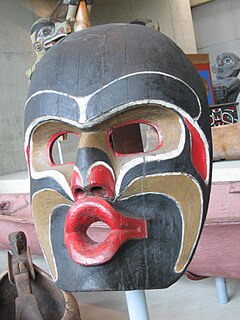 The haietlik is a lightning spirit and legendary creature in the mythology of the Nuu-chah-nulth (Nootka) people of the Canadian Pacific Northwest Coast. According to legend, the haietlik is both an ally and a weapon of the thunderbirds, employed by them in the hunting of whales. They are described as huge serpents with heads as sharp as a knife and tongues that shoot lightning bolts. A blow from a haietlik injures a whale enough that the hunting thunderbird can carry it away as prey. The haietlik is variously described as dwelling among the feathers of the thunderbirds to be unleashed with a flap of the wings, or inhabiting the inland coastal waters and lakes frequented by the Nuu-chah-nulth people.

The Indigenous peoples of the Pacific Northwest Coast are composed of many nations and tribal affiliations, each with distinctive cultural and political identities. They share certain beliefs, traditions and practices, such as the centrality of salmon as a resource and spiritual symbol, and many cultivation and subsistence practices. The term Northwest Coast or North West Coast is used in anthropology to refer to the groups of Indigenous people residing along the coast of what is now called British Columbia, Washington state, parts of Alaska, Oregon, and Northern California. The term Pacific Northwest is largely used in the American context.

The sisiutl is a legendary creature found in many of the cultures of the Indigenous peoples of the Pacific Northwest Coast. It is typically depicted as a double-headed serpent with fish qualities, sometimes with an additional central face of a supernatural being. The sisuitl features prominently in Pacific Northwest art, dances and songs. The sisuitl is closely associated with shamans because both are seen as mediators between the natural and supernatural worlds.

Quileute, also known as Quillayute, was the last Chimakuan language, spoken until the end of the 20th century by Quileute and Makah elders on the western coast of the Olympic peninsula south of Cape Flattery at La Push and the lower Hoh River in Washington state, United States. The name Quileute comes from kʷoʔlí·yot’[kʷoʔléːjotʼ], the name of a village at La Push.

Psi-ya-hus is a spirit rock near the Fauntleroy ferry terminal in Seattle, Washington. Coast Salish peoples associate the rock with A'yahos, a "malevolent and dangerous" spirit, capable of shapeshifting, who sometimes appears in a two-headed serpent form, who is associated with other earthquake-related areas like landslides near the Seattle Fault.

Ella Elizabeth Clark was an American educator, author, and Professor Emerita of English. Although Clark was not a trained anthropologist or folklorist, she collected large numbers of American Indian and First Nations oral traditions and made them available to a wide readership. 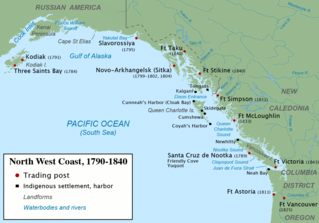 Nahwitti was a Kwakwakaʼwakw First Nation village and a major trading site during the maritime fur trade era of approximately 1790 to 1850. Today it is an Indian reserve under the administration of the Kwakwakaʼwakw Tlatlasikwala Nation. It is located near the northern tip of Vancouver Island, at Cape Sutil on Queen Charlotte Sound, near Hope Island and the Nahwitti River, east of Cape Scott, and not far from historic Fort Rupert and modern Port Hardy.

Pachena Bay is located 13 km (8.1 mi) south of Bamfield in Pacific Rim National Park at the southern end of Vancouver Island, British Columbia, Canada. It was the location of a First Nation's village that was destroyed by a tsunami in 1700.