Thunderbolt was a wooden roller coaster which operated at Savin Rock Amusement Park in West Haven, Connecticut, from 1925 until 1938 when it was destroyed by a hurricane. It was rebuilt in modified form in 1939 and it continued to operate until 1956. [1] When it was first built, it was purported to be the fastest roller coaster in the world. [2] [3]

Originally named "The Bobs", the coaster was best known by its later name of Thunderbolt. [1] It was designed by noted roller coaster engineers Frank Prior and Frederick Church and built by the Traver Engineering Company. [4] The coaster was built approximately 500 feet (150 m) out onto Liberty Pier in Long Island Sound and could be easily seen from up and down the beach and from several nearby piers. [1] [5] [6] It was quite popular, financially successful, and is thought to have driven at least one other nearby coaster out of business. [1]

In 1936, the Thunderbolt was struck by lightning which caused damage to its mechanical operation. [1] The coaster was closed the remainder of that year but reopened for the 1937 season. [1] In 1938, however, the coaster was destroyed by the Great New England Hurricane. [1] [3] [5] [6] The coaster was rebuilt in 1939 and renamed the Giant Flyer. [7] [1] The ride was somewhat modified in this rebuild, however, and is thought to have become a less exciting ride as a result; it was demolished in 1957. [1] The flagpole from the ride is preserved in the Savin Rock Museum. [8]

Standing approximately 90 feet (27 m) tall and approximately 5,000 feet (1,500 m) long, [3] [8] Thunderbolt had a fearsome reputation and violent ride experience (as was common for Traver coasters). [1] Its layout was very similar to the Revere Beach Cyclone (another Traver-built coaster). [1] Although exact speeds are not given, several sources suggest that it was the fastest roller coaster in the world when it was built. [2] [3] The ride had several reported fatalities (before 1938), and it was said to shake riders so much that ride operators would collect valuables that fell loose to the pier floor. [1] The ride had a much milder reputation after its rebuild in 1939. [1] 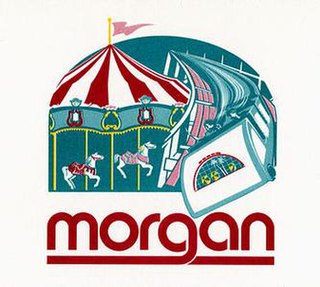 D. H. Morgan Manufacturing, later simply known as Morgan, was a manufacturer of roller coaster trains, custom amusement rides, roller coasters, children's rides and other amusement devices. Founded in 1983, the company was originally headquartered in Scotts Valley, California. In 1991, the company moved to La Selva Beach, California and into a new 55,000 square-foot indoor manufacturing facility that also featured an acre of outdoor space. That facility was later increased to 75,000 square feet. The company produced a variety of rides from 1983 until 2001, but is probably best known for its steel hyper coasters.

F.lli Pinfari S.r.l was an Italian amusement ride manufacturing company based in Suzzara, Italy. Pinfari was liquidated on 15 July 2004, due to the early 2000s recession and the weakness of the United States dollar. In 2007, its brand and intellectual property were acquired by Interpark Amusements Srl, based in Modena.

Savin Rock was an American amusement park in West Haven, Connecticut. It was previously called The White City. The park included a number of roller coasters, other rides and numerous funhouses.

The Sesquicentennial Cyclone was a steel-framed wooden roller coaster which was operated at the Philadelphia Sesquicentennial Exposition in 1926. Designed and built by Harry Traver of Traver Engineering, the coaster was a medium-sized prototype of Traver's later Giant Cyclone Safety Coasters.

Cyclone was the name of two wooden roller coasters which operated at Palisades Amusement Park in Bergen County, New Jersey. The first operated from 1927 through 1934, and the second between 1945 and 1971.

Zip or Zipp was a steel-framed wooden roller coaster which operated at Oaks Amusement Park in Portland, Oregon. The coaster was a more compact variant of the Giant Cyclone Safety Coasters which were built by Harry Traver of the Traver Engineering Company in the mid to late 1920s.

Hydrus is a steel roller coaster at Casino Pier in Seaside Heights, New Jersey. Opened in 2017, it was the sixth Gerstlauer Euro-Fighter roller coaster to open in the United States and the first Euro-Fighter 320 model in the world. It replaced Star Jet, which was destroyed by Hurricane Sandy in 2012.

Giant Cyclone Safety Coasters were a model line of roller coasters which were designed and marketed by Harry Traver and his company Traver Engineering in the 1920s. Despite their name, they had a dangerous reputation and are regarded by many historians as some of the most fearsome roller coasters ever built.

Jet Star, sometimes stylized as Jet-Star, was a steel roller coaster which operated between 1970 and 2000 at Casino Pier in Seaside Heights, New Jersey. It was replaced by—and sometimes confused with—Star Jet, the coaster which was swept into the Atlantic Ocean by Hurricane Sandy in 2012. 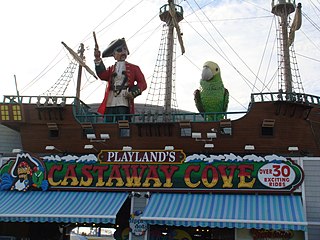 Playland's Castaway Cove is an amusement park situated on a pier, in Ocean City, New Jersey, United States. The pier opened in 1959 and features 28 ride and attractions, including 4 roller coasters.