Mellacheruvu is a village in Suryapet district of the Indian state of Telangana. It is located in Mellachervu mandal of Kodad revenue division..It is about 64km from the district headquarters Suryapet.

Nalgonda district is a district in the Telangana state of India. It has a population of 3,483,648, of which 13.32% is urban as of 2011. The district shares boundaries with Suryapet, Rangareddy, Bhuvanagiri, and Nagarkurnool districts, and with the state boundary of Andhra Pradesh.

Suryapet(listen) is a city in the Indian state of Telangana. It is a municipality and the headquarters of its eponymous district. The Government of India announced Suryapet to be developed under the Atal Mission for Rejuvenation and Urban Transformation (AMRUT) scheme. Suryapet has been awarded the "Cleanest city" in South India by the Ministry of Urban development in Swachh Survekshan 2017. It is also known as "Gateway of Telangana". It is located about 134 kilometres (83 mi) east of the state capital, Hyderabad and also it is located about 138 kilometres (86 mi) West of Vijayawada. 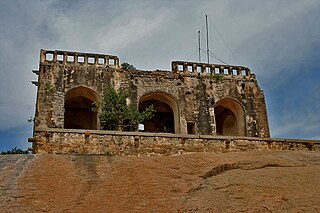 Bhongir, also known as Bhuvanagiri, is a town and headquarters of Yadadri Bhuvanagiri district of the Indian state of Telangana. Falling under Hyderabad Metropolitan Development Authority, the town is located on National Highway 163, about 48 km from state capital Hyderabad

Mandadi Prabhakar Reddy (1935–1997) was an Indian film character actor, known for his works in Telugu cinema. He acted in over 472 films over three decades. He wrote stories for several acclaimed films, including Karthika Deepam. The "Dr. M Prabhakara Reddy Chalana Chitra Karmika Chitrapuri" in Manikonda, Hyderabad, is named in his honor.

Mallu Swarajyam was an Indian politician from Communist Party of India and Freedom fighter. She was member of an armed dalam which took part in the Telangana struggle.

Kandagatla is a village in Suryapet district in Telangana, India. It falls under Athmakur (S) mandal. It is famous for Thati kallu and is surrounded by mountains.

Dharmavarapu Kottam Aruna is an Indian politician from Telangana. She is Vice President of Bharatiya Janata Party. She has been a legislator representing Gadwal constituency in Telangana

Nalamada Uttam Kumar Reddy is an Indian politician and former IAF pilot. He is a Member of Parliament for the Nalgonda constituency. He is also serving as the President of Telangana Pradesh Congress Committee. He worked as the Minister of Housing, Weaker Selection Housing Programmes in Government of Andhra Pradesh. 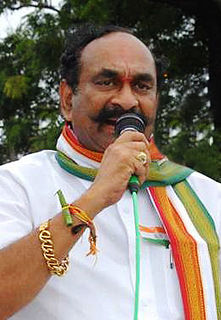 Guntakandla Jagadish Reddy is an Indian politician and present MLA for Suryapet. He has served as Minister of Energy in Telangana since 2019. He was the Energy minister of Telangana from 2014-2018. He is also a member of TRS party politbureau.. 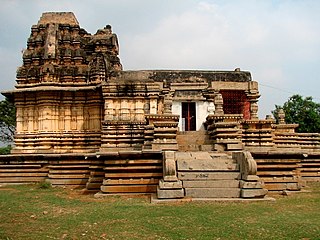 Thungathurthy mandal is one of the 23 mandals in Suryapet district of the Indian state of Telangana. It is under the administration of Suryapet revenue division with its headquarters at Thungathurthy. It is bounded by Nagaram mandal towards West, Nuthankal mandal towards South, Maddirala mandal towards East, Mahabubabad district towards North.

Nagaram mandal is one of the 23 mandals in Suryapet district of the Indian state of Telangana. It is under the administration of Suryapet revenue division with its headquarters at Nagaram. It is bounded by Jajireddygudem mandal towards South, Thungathurthy mandal towards East, Thirumalagiri mandal towards North, Nalgonda district towards West,

Moinabad mandal is one of the 27 mandals in Ranga Reddy district of the Indian state of Telangana. It is under the administration of Chevella revenue division and has its headquarters at Moinabad.

Raj Thota is an Indian Telugu-Language film cinematographer. He received praise for the film Arjun Reddy.