Thurston Clarke (born 1946) is an American historian, author and journalist.

Clarke was educated at Yale University, Columbia University and the School of Oriental and African Studies, London.[ citation needed ]

Clarke is the author of thirteen books, the most recent of which is Honorable Exit: How a Few Brave Americans Risked All to Save Our Vietnamese Allies at the End of the War. [1]

Clarke is a frequent speaker on topics such as writing, modern history and travel and has appeared in documentaries. [2]

Clarke is the recipient of a Guggenheim fellowship. [3] He has also received the Lowell Thomas Award for Travel Literature. [4]

He lives with his wife and three daughters in the Adirondacks, in upstate New York. [3] His daughter, Sophie Clarke, was the winner of Survivor: South Pacific , the 23rd season of the popular CBS reality television show. 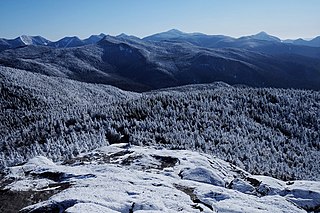 The Adirondack Mountains form a massif in northeastern Upstate New York, which is part of the United States. Its boundaries correspond roughly to the boundaries of Adirondack Park. They cover about 5,000 square miles (13,000 km2). The mountains form a roughly circular dome, about 160 miles (260 km) in diameter and about 1 mile (1,600 m) high. The current relief owes much to glaciation. There are more than 200 lakes around the mountains, including Lake George, Lake Placid, and Lake Tear of the Clouds, which is the source of the Hudson River. The Adirondack Region is also home to hundreds of mountain summits, with some reaching heights of 5,000 feet or more.

The Richmond Braves were an American minor league baseball club based in Richmond, Virginia, the Triple-A International League affiliate of the Atlanta Braves from 1966 to 2008. Owned by the parent Atlanta club and colloquially referred to as the R-Braves, they played their home games at a stadium called The Diamond on Richmond's Northside built for them in 1985, and before then Parker Field on the same site. The franchise moved to Gwinnett County, Georgia in 2009 to play in the newly built Coolray Field as the Gwinnett Braves.

Utica is a city in the Mohawk Valley and the county seat of Oneida County, New York, United States. The tenth-most-populous city in New York State, its population was 65,283 in the 2020 U.S. Census. Located on the Mohawk River at the foot of the Adirondack Mountains, it is approximately 95 miles west-northwest of Albany, 55 mi (89 km) east of Syracuse and 240 mi (386 km) northwest of New York City. Utica and the nearby city of Rome anchor the Utica–Rome Metropolitan Statistical Area comprising all of Oneida and Herkimer Counties.

Interstate 87 (I-87) is a 333.49-mile-long (536.70 km) north–south Interstate Highway located wholly within the U.S. state of New York. It is most of the main highway between New York City and Montreal. The highway begins at exit 47 off I-278 in the New York City borough of The Bronx, just north of the Triborough Bridge and Grand Central Parkway. From there, the route runs northward through the Hudson Valley, the Capital District, and the easternmost part of the North Country to the Canadian border in the Town of Champlain. At its north end, I-87 continues into Quebec as Autoroute 15 (A-15). I-87 connects with several regionally important roads: I-95 in New York City, New York State Route 17 near Harriman, I-84 near Newburgh, and I-90 in Albany. The route is the longest intrastate Interstate Highway in the Interstate Highway System. The highway is not contiguous with I-87 in North Carolina. 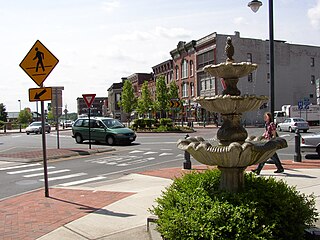 Glens Falls is a city in Warren County, New York, United States and is the central city of the Glens Falls Metropolitan Statistical Area. The population was 14,700 at the 2010 census. The name was given by Colonel Johannes Glen, the falls referring to a large waterfall in the Hudson River at the southern end of the city.

The American Hockey League (AHL) is a professional ice hockey league based in the United States and Canada that serves as the primary developmental league for the National Hockey League (NHL). Since the 2010–11 season, every team in the league has an affiliation agreement with one NHL team. When NHL teams do not have an AHL affiliate, players are assigned to AHL teams affiliated with other NHL teams. Twenty-six AHL teams are located in the United States and the remaining five are in Canada. The league offices are located in Springfield, Massachusetts, and its current president is Scott Howson. 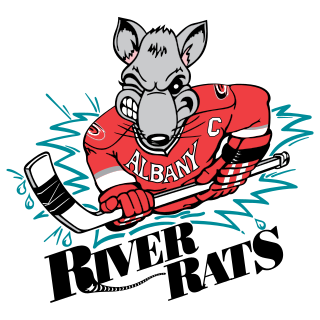 The Albany River Rats were a minor league professional ice hockey team in the American Hockey League. They played in Albany, New York at the Times Union Center.

The State University of New York College of Environmental Science and Forestry (ESF) is a specialized, doctoral-degree granting institution in Syracuse, New York. It is part of the State University of New York (SUNY) system. ESF is immediately adjacent to Syracuse University, within which it was founded, and with which it maintains a special relationship. It is classified among "R2: Doctoral Universities – High research activity".

Operation Frequent Wind was the final phase in the evacuation of American civilians and "at-risk" Vietnamese from Saigon, South Vietnam, before the takeover of the city by the North Vietnamese People's Army of Vietnam (PAVN) in the Fall of Saigon. It was carried out on 29–30 April 1975, during the last days of the Vietnam War. More than 7,000 people were evacuated by helicopter from various points in Saigon. The airlift resulted in a number of enduring images.

Harold Weston was an American modernist painter, based for many years in the Adirondack Mountains, whose work moved from expressionism to realism to abstraction. He was collected by Duncan Phillips, widely exhibited in the 1920s and 1930s, and painted murals under the Treasury Relief Art Project for the General Services Administration. In later life he was known for his humanitarian food relief work during World War II and his arts advocacy that led to the passage of the National Endowment for the Arts and Humanities Act of 1965. Weston’s most recent museum exhibition was at the Shelburne Museum in Vermont, and his most recent gallery exhibition was at Gerald Peters Gallery in New York City.

The Empire State Games are a set of annual Olympic-style competitions for amateur athletes from the state of New York, encompassing several divisions and allowing athletes of all ages to compete. It was a member of the National Congress of State Games. The games consisted of a number of competitions: 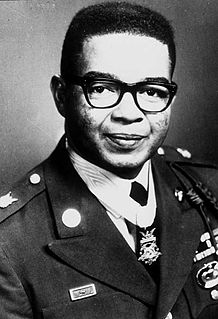 Lawrence Joel was a United States Army soldier who served in the Korean and Vietnam Wars. While serving in South Vietnam as a medic with the rank of specialist five assigned to 1st Battalion of the 503rd Infantry in the 173rd Airborne Brigade, Joel received the Silver Star and the Medal of Honor for his heroism in a battle with the Viet Cong that occurred on November 8, 1965. He was the first medic to earn the Medal of Honor during the Vietnam War and the first living black American to receive this medal since the Spanish–American War in 1898.

Dwight Hal Johnson a native of Detroit, Michigan, was a United States Army soldier who received the Medal of Honor for his actions in January 1968 during the Vietnam War.

Interstate 90 (I-90) is a part of the Interstate Highway System that runs from Seattle, Washington, to Boston, Massachusetts. In the U.S. state of New York, I-90 extends 385.88 miles (621.01 km) from the Pennsylvania state line at Ripley to the Massachusetts state line at Canaan, and is the second-longest highway in the state after NY 17. Although most of the route is part of the tolled New York State Thruway, two non-tolled sections exist along I-90. Within New York, I-90 has a complete set of auxiliary Interstates, which means that there are interstates numbered I-190 through I-990 in the state, with no gaps in between. For most of its length in New York, I-90 runs parallel to the former Erie Canal route, New York State Route 5 (NY 5), U.S. Route 20 (US 20) and the CSX railroad mainline that traverses the state. 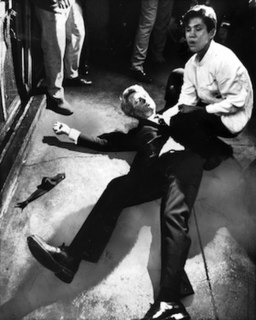 On June 5, 1968, presidential candidate Robert F. Kennedy was mortally wounded shortly after midnight at the Ambassador Hotel in Los Angeles. Earlier that evening, the 42-year-old junior senator from New York was declared the winner in the South Dakota and California Democratic presidential primary during the 1968 presidential election. He was pronounced dead at 1:44 a.m. PDT on June 6, about 26 hours after he had been shot.

The New York State College of Forestry, the first professional school of forestry in North America, opened its doors at Cornell University, in Ithaca, New York, in the autumn of 1898., It was advocated for by Governor Frank S. Black, but after just a few years of operation, it was defunded in 1903, by Governor Benjamin B. Odell in response to public outcry over the College's controversial forestry practices in the Adirondacks.

Dirty Money was a musical duo consisting of singer-songwriters and dancers Dawn Richard and Kalenna Harper in 2009; both artists having been signed to Bad Boy Entertainment. Together with record producer, rapper and label boss Sean Combs, they performed as Diddy – Dirty Money as a collaborative act on the Bad Boy label, releasing the highly acclaimed and successful album Last Train to Paris in December 2010. The group disbanded in 2012. 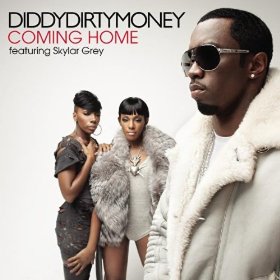 "Coming Home" is a song by the rapper and producer Diddy and his group Dirty Money, from their debut album Last Train to Paris (2010). It was released on November 21, 2010, as the album's fourth single. The song was written by J. Cole, Jay-Z, Alex da Kid, and Skylar Grey, with Kid and Jay-Z handling the production. The song also features Grey lending vocals on the song's chorus. Jay-Z and Kid gifted the song to Diddy for Last Train to Paris. "Coming Home" is a biographically written hip hop and pop ballad inspired by moments in Diddy's life, the loss of his close friend the Notorious B.I.G., and references to classic songs by Dionne Warwick, McFadden & Whitehead, and Smokey Robinson & the Miracles.

The Vietnam Humanitarian Assistance and Evacuation Act of 1975 was U.S. congressional legislation that proposed to designate financial resources for the evacuation and humanitarian aid of South Vietnam preceding the Fall of Saigon. The Act was not passed, however, it began the debate in Congress over how best to evacuate Vietnam and the extent of the President's power to use military troops in order to safely evacuate refugees. These conversations led to the Indochina Migration and Refugee Assistance Act which was introduced shortly after H.R. 6096 failed to pass.

Colonel George D. Jacobson was a United States Army officer who served in World War II, the Korean War and the Vietnam War.