Umar Ibrahim [1] (born August 4, 1995), [2] [3] known better by his stage name Thutmose, is a Nigerian-American rapper, singer, and songwriter based in Brooklyn, New York.

Ibrahim grew up in a small city outside of Lagos, Nigeria. Shortly after the Lagos armoury explosion in 2002, at age 7, [4] Ibrahim and his family moved to New York. Ibrahim went to Alfred State College for a year studying computer science, but dropped out to pursue music full-time. [2]

Thutmose first gained attention in 2017 after releasing a freestyle to the Kendrick Lamar single "Humble". [5]

On October 16, 2017, Thutmose released the single "WuWu" (short for "what's up with you?") through Pigeons and Planes . Speaking about the track, Ibrahim said, "Especially with dark times in the world, I hope this song serves as a reminder that there's still a lot of love in the world." [6]

On April 30, 2018, Thutmose released a track titled "Run Wild" featuring NoMBe. Originally intended for an upcoming debut album, [7] the track was released alongside the trailer for EA Sports' FIFA 18 as its theme music. [8] This was followed by the collaborative EP Run Wild released on August 8, 2018. [9]

Thutmose was included in the soundtrack album Spider-Man: Into the Spider-Verse , released on December 14, 2018, for the 2018 animated film of the same name. [10]

On November 10, 2019, Thutmose was part of the song "Giants" by virtual hip-hop group True Damage, created to promote League of Legends . The group debuted during the 2019 League of Legends World Championship. The rapper plays Ekko, a playable character in League of Legends. [11] The group also includes Keke Palmer, Soyeon, Becky G and Duckwrth. [12] 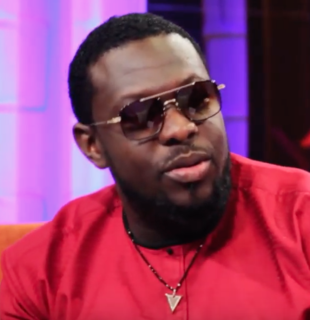 Inetimi Timaya Odon , better known by his stage name Timaya, is a Nigerian singer and songwriter. He hails from Odi, Bayelsa state. He is the founder of DM Records Limited. His solo career began in 2005 with the release of "Dem Mama", which also appeared on his debut album, True Story released the following year. His second album Gift and Grace was released in 2008.

Olanrewaju Ogunmefun, better known by his stage name Vector, is a Nigerian rapper and songwriter. He has released three studio albums, including State of Surprise and The Second Coming (2012). In anticipation of his second studio album, he released a mixtape titled Bar Racks. "Lafiaji" which was released in December 2016. He also released a mixtape in October 2018, "The Rap Dialogue" in an effort to keep the spirit of Nigerian hip-hop alive 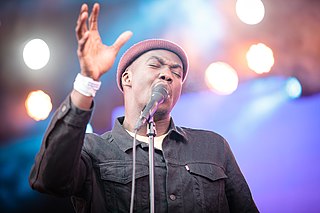 Jacob Banks is a Nigerian-born English singer and songwriter from Birmingham. Banks won the 2012 MOBO UnSung regional competition in Birmingham and the Adidas "Are You In" music competition. His music is influenced by a range of genres including soul, R&B and hip hop. Banks is currently signed with American label Interscope Records. 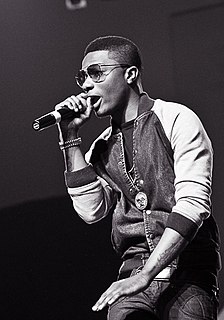 Ayodeji Ibrahim Balogun, known professionally as Wizkid is a Nigerian singer and songwriter. He began recording music at the age of 11 and managed to release a collaborative album with the Glorious Five, a group he and a couple of his church friends formed. Wizkid signed a record deal with Empire Mates Entertainment (E.M.E) in 2009.

Judah & the Lion are an American alternative and folk band from Nashville, Tennessee, formed in 2011. The band is made up of Judah Akers, Brian Macdonald, and Nate Zuercher.

Sofi Tukker are an American musical duo based in Florida consisting of Sophie Hawley-Weld and Tucker Halpern. They are best known for their songs "Drinkee", "Best Friend", and "Purple Hat". "Best Friend" was featured in a commercial during Apple's unveiling of the iPhone X, while "Drinkee" was nominated for a Grammy at the 2017 Grammy Awards. In December 2018, their album Treehouse was nominated for a Grammy for Best Dance/Electronic Album.

Oluwatosin Ajibade, better known by his stage name Mr Eazi, is a Nigerian singer, songwriter, and entrepreneur. He is a pioneer of Banku music, a fusion of sound he describes as a mixture of Ghanaian highlife and Nigerian chord progressions and patterns. Mr Eazi relocated to Kumasi, Ghana in 2008 and enrolled at KNUST, where he began booking artists to perform at college parties. He showed interest in music after recording a guest verse on "My Life", a song that gained traction and became a popular record at KNUST. Mr Eazi released his debut mixtape About to Blow in July 2013. He gained an international audience following the release of the Efya-assisted single "Skin Tight". His second mixtape Life Is Eazi, Vol. 1 – Accra To Lagos was released on 10 February 2017.

Christopher Smith Jr., better known by his stage name Smino, is an American rapper and singer from St. Louis, Missouri. Smino is the founder of the musical collective Zero Fatigue with Bari, Monte Booker, Jay2, and Ravyn Lenae. He is a member of the hip-hop supergroup Zoink Gang, with JID, Buddy and Guapdad 4000. He is also one third of the supergroup Ghetto Sage, with Saba and Noname. Smino is signed to Downtown Records and Interscope.

Brian Imanuel Soewarno, professionally known as Rich Brian and formerly as Rich Chigga, is an Indonesian rapper, singer, songwriter, and record producer. He is known for his viral debut single "Dat $tick", which was first released in March 2016 on SoundCloud. The single was later certified gold by RIAA. His debut studio album, Amen, was released in February 2018, and peaked at number 18 on the US Billboard 200. Brian's second studio album, The Sailor, was released on 26 July 2019. He released an EP titled 1999 on 25 August 2020. Brian has collaborated with many artists from China and South Korea such as Kris Wu, Chungha, Keith Ape, Jackson Wang and Jae Park.

Rita Ekwere, better known under her stage name of Ray BLK, is a British singer and songwriter who was born in Nigeria, and grew up in Catford in London. She won the BBC's Sound of 2017, and was the first unsigned artist to do so. On 28 October 2016, she released her debut mini-album, Durt, and in January 2018 signed to the UK branch of Island Records.

Jared Lee, known by his stage name Duckwrth, is an American rapper and songwriter from South Los Angeles, California. In the mid-2010s, he began releasing his own songs online under the Duckwrth moniker and expanded his audience when he collaborated and released a split project with The Kickdrums in 2015 titled Nowhere. In 2016, Duckwrth released his first full-length album, I'm Uugly. In late 2017, he released a mixtape, An XTRA UUGLY Mixtape, being his first record with Republic Records. In 2019, he released The Falling Man EP and released his major label debut album on Republic, SuperGood in 2020. Duckwrth's single Start A Riot featuring rapper Shaboozey was also featured in the 2018 film, Spider-man: Into The Spiderverse. 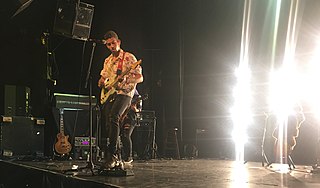 Noah McBeth, is the son of a German music manager and an American fashion model. He is better known by his stage name NoMBe. McBeth holds both German and US citizenship and is currently working as a Independent recording artist, composer and record producer based in Los Angeles as well as Hawaii.

Ocean Alexander Alouwishas Wisdom, known professionally as Ocean Wisdom, is an English rapper from Camden Town, London. His largest claim to fame is his debut single "Walkin'", in which he delivered lyrics faster than Eminem's "Rap God", at 4.45 words per second, as opposed to "Rap God"'s 4.31.

Danielle Balbuena, better known by her stage name 070 Shake, is an American hip hop recording artist. 070 Shake is a part of the musical collective 070, who have released a mixtape together titled The 070 Project: Chapter 1 (2016). Shake released her debut extended play, Glitter, in March 2018.

Cordae Amari Dunston, known mononymously as Cordae, is an American rapper, singer, and songwriter. Cordae gained popularity by releasing remixes of popular songs, such as "My Name Is" by Eminem, and "Old Niggas" which was a response to the song "1985" by J. Cole. Videos to both remixes were uploaded to WorldStarHipHop's YouTube channel, which led to an immense and immediate positive response from both mainstream media and the online rap community. His debut studio album, The Lost Boy was released on July 26, 2019 to widespread acclaim and received two nominations for Best Rap Album and Best Rap Song for the single "Bad Idea" at the 62nd Grammy Awards. Cordae was a member of the YBN collective from 2018 until he left the group in 2020.

Divine Ikubor, known professionally as Rema, is a Nigerian singer and rapper. He rose to prominence with the release of the song "Iron Man", which appeared on Barack Obama's 2019 summer playlist. In 2019, he signed a record deal with Jonzing World, a subsidiary of Mavin Records.

Joseph Akinwale Akinfenwa-Donus, known professionally as Joeboy, is a Nigerian singer and songwriter. Mr. Eazi of record label "emPawa Africa" discovered him in 2017. His genre of music is that of Afro pop and R&B. He was born on 21 May 1997 in Lagos State, Nigeria.

Rema is the debut eponymous extended play by Nigerian singer, rapper and songwriter Rema. It was released on 22 March 2019 by Jonzing World, a subsidiary of Mavins Record.