An electrical grid', or electric grid, is an interconnected network for delivering electricity from producers to consumers. It consists of 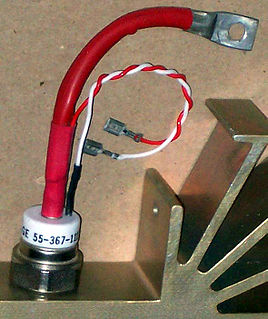 In parallel with series connected reactance and thyristor valve, there may also be a capacitor bank, which may be permanently connected or which may use mechanical or thyristor switching. The combination is called a static VAR compensator.

A static VAR compensator is a set of electrical devices for providing fast-acting reactive power on high-voltage electricity transmission networks. SVCs are part of the Flexible AC transmission system device family, regulating voltage, power factor, harmonics and stabilizing the system. A static VAR compensator has no significant moving parts. Prior to the invention of the SVC, power factor compensation was the preserve of large rotating machines such as synchronous condensers or switched capacitor banks.

A thyristor controlled reactor is usually a three-phase assembly, normally connected in a delta arrangement to provide partial cancellation of Harmonics. Often the main TCR reactor is split into two halves, with the thyristor valve connected between the two halves. This protects the vulnerable thyristor valve from damage due to flashovers, lightning strikes etc.

The current in the TCR is varied from maximum (determined by the connection voltage and the inductance of the reactor) to almost zero by varying the "Firing Delay Angle", α. α is defined as the delay angle from the point at which the voltage becomes positive to the point at which the thyristor valve is turned on and current starts to flow.

Maximum current is obtained when α is 90°, at which point the TCR is said to be in "full conduction" and the rms current is given by:

Ltcr is the total TCR inductance per phase

The current lags 90° behind the voltage in accordance with classical AC circuit theory. As α increases above 90°, up to a maximum of 180°, the current decreases and becomes discontinuous and non-sinusoidal. The TCR current, as a function of time, is then given by:

A TCR comprises two main items of equipment: the reactor itself, which is usually air-cored (although iron-cored reactors are possible) and the thyristor valve. Depending on the system voltage, an intermediate power transformer may be required to step up from the voltage handled by the thyristors to the transmission system voltage. 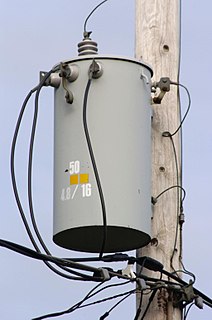 A transformer is a static electrical device that transfers electrical energy between two or more circuits. A varying current in one coil of the transformer produces a varying magnetic flux, which, in turn, induces a varying electromotive force across a second coil wound around the same core. Electrical energy can be transferred between the two coils, without a metallic connection between the two circuits. Faraday's law of induction discovered in 1831 described the induced voltage effect in any coil due to changing magnetic flux encircled by the coil.

In addition to the thyristors themselves, each inverse-parallel pair of thyristors has a Resistor - Capacitor circuit connected across it, to force the voltage across the valve to divide uniformly amongst the thyristors and to damp the "commutation overshoot" which occurs when the valve turns off.

A TCR operating with α > 90° generates substantial amounts of harmonic currents, particularly at 3rd, 5th and 7th harmonics. By connecting the TCR in delta, the harmonic currents of order 3n ("Triplen harmonics") flow only around the delta and do not escape into the connected AC system. However, the 5th and 7th harmonics (and to a lesser extent 11th, 13th, 17th etc.) must be filtered in order to prevent excessive voltage distortion on the AC network. This is usually accomplished by connecting Harmonic Filters in parallel with the TCR. The filters provide capacitive reactive power which partly offsets the inductive reactive power provided by the TCR.

In mechanics and physics, simple harmonic motion is a special type of periodic motion or oscillation motion where the restoring force is directly proportional to the displacement and acts in the direction opposite to that of displacement. 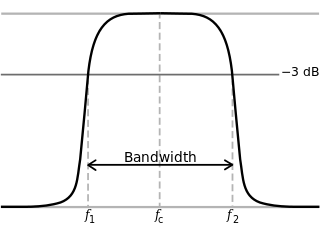 In physics, a phonon is a collective excitation in a periodic, elastic arrangement of atoms or molecules in condensed matter, like solids and some liquids. Often designated a quasiparticle, it represents an excited state in the quantum mechanical quantization of the modes of vibrations of elastic structures of interacting particles.

A flexible alternating current transmission system (FACTS) is a system composed of static equipment used for the AC transmission of electrical energy. It is meant to enhance controllability and increase power transfer capability of the network. It is generally a power electronics-based system. 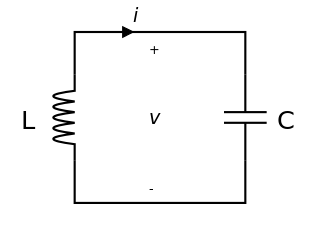 The Cole–Cole equation is a relaxation model that is often used to describe dielectric relaxation in polymers.

The mathematics of pendulums are in general quite complicated. Simplifying assumptions can be made, which in the case of a simple pendulum allow the equations of motion to be solved analytically for small-angle oscillations.

An LC circuit can be quantized using the same methods as for the quantum harmonic oscillator. An LC circuit is a variety of resonant circuit, and consists of an inductor, represented by the letter L, and a capacitor, represented by the letter C. When connected together, an electric current can alternate between them at the circuit's resonant frequency:

A thyristor switched capacitor (TSC) is a type of equipment used for compensating reactive power in electrical power systems. It consists of a power capacitor connected in series with a bidirectional thyristor valve and, usually, a current limiting reactor (inductor). The thyristor switched capacitor is an important component of a Static VAR Compensator (SVC), where it is often used in conjunction with a thyristor controlled reactor (TCR). Static VAR compensators are a member of the Flexible AC transmission system (FACTS) family.

A frequency-selective surface (FSS) is any thin, repetitive surface designed to reflect, transmit or absorb electromagnetic fields based on the frequency of the field. In this sense, an FSS is a type of optical filter or metal-mesh optical filters in which the filtering is accomplished by virtue of the regular, periodic pattern on the surface of the FSS. Though not explicitly mentioned in the name, FSS's also have properties which vary with incidence angle and polarization as well - these are unavoidable consequences of the way in which FSS's are constructed. Frequency-selective surfaces have been most commonly used in the radio frequency region of the electromagnetic spectrum and find use in applications as diverse as the aforementioned microwave oven, antenna radomes and modern metamaterials. Sometimes frequency selective surfaces are referred to simply as periodic surfaces and are a 2-dimensional analog of the new periodic volumes known as photonic crystals.