Dr Tia Kansara is a sustainable design expert and co-founder of Kansara Hackney [1] in 2008 with architect Rod Hackney. She is also a visiting professor at CEPT University architecture school.

Kansara achieved her Duke of Edinburgh Award in 1999 while studying at Birmingham's City Technology College and was an International Baccalaureate ambassador to the UK Government. [2]

In 2005 she graduated from the School of Oriental and African Studies in London with a degree in Economics with South Asian Studies and then moved to Japan for three years teaching English and studying Japanese. Following the 2011 Fukushima earthquake, recorded a fundraising song. [3]

In 2016 she completed her PhD research at University College London on the theme of sustainable cities.

In November 2018, Kansara was named to the Financial Times' list of the 'Top 100 minority ethnic leaders in technology.' [4]

Her family was originally from Gujarat, India and she is currently based in the UK and Abu Dhabi. [5] 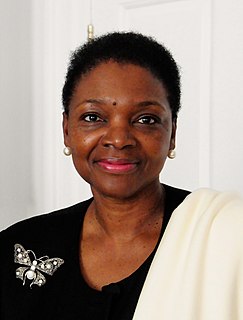 Valerie Ann Amos, Baroness Amos, is a British Labour Party politician and diplomat who served as the eighth UN Under-Secretary-General for Humanitarian Affairs and Emergency Relief Coordinator. Before her appointment to the UN, she served as British High Commissioner to Australia. She was created a life peer in 1997, serving as Leader of the House of Lords and Lord President of the Council from 2003 to 2007. Since September 2020, Amos has been Master of University College, Oxford, succeeding Sir Ivor Crewe and becoming the first-ever black head of an Oxford college, as well as the first woman appointed to the post.

Dame Margaret Olivia Hillier, known as Meg Hillier, is a British Labour and Co-operative politician who was elected as the Member of Parliament (MP) for Hackney South and Shoreditch at the 2005 general election, was a junior government minister (2007–10) and was succeeded by Caroline Flint as Shadow Secretary of State for Energy and Climate Change in the Labour Party October 2011 reshuffle. She has chaired the Public Accounts Committee since 2015.

Sarah Virginia Brinton, Baroness Brinton, known as Sal Brinton, is a British politician who served as president of the Liberal Democrats from 2015 to 2020. In November 2010 she was nominated to the House of Lords, taking her place on 10 February 2011 having been created Baroness Brinton, of Kenardington in the County of Kent on 4 February. After Jo Swinson lost her seat at the 2019 United Kingdom general election, Brinton and Sir Ed Davey became acting co-leaders of the Liberal Democrats.

Bill Liao is an Australian entrepreneur. He is a venture partner with SOSV and recognised as one of the Top 100 minority ethnic leaders in technology by the Financial Times.

Meral Hussein Ece, Baroness Hussein-Ece, is a British Liberal Democrat member of the House of Lords. She is the first woman of Turkish Cypriot origin to be a member of either house of Parliament after she was appointed a Liberal Democrat working peer on 28 May 2010. She was the Liberal Democrat Spokeswoman for Equalities from 2015 until 2016, under leader Tim Farron.

Polly Billington is a former BBC journalist who worked on the Today programme before becoming a special advisor to Ed Miliband. She was the media director for his successful bid in the 2010 Labour leadership election. Billington was the Labour Party's parliamentary candidate for Thurrock at the 2015 general election and a Labour Party official. She is the director of UK100, and councillor for De Beauvoir ward in the London Borough of Hackney.

Nathaniel Peat is a social entrepreneur and international motivational speaker. At age 25, he founded the nonprofit organization The Safety Box, which uses grassroots methods to interrupt violent behaviour, build entrepreneurship and foster achievement in young people using alternative curriculum in British schools. He is a regular television and radio commentator on youth and education.

Angel Chang is an American fashion designer and early pioneer in the cross-over between fashion and technology. She received the Ecco Domani Fashion Foundation Award and Cartier Women's Initiative Award in 2007. The revival of endangered traditional Chinese hand-craftsmanship translated into modern designs is the philosophy behind her current womenswear label ANGEL CHANG.

Rose Josephine Hudson-Wilkin, is a British Anglican bishop, who has been suffragan Bishop of Dover in the diocese of Canterbury - deputising for the Archbishop - since 2019: she is the first black woman to become a Church of England bishop. She had served as Chaplain to the Speaker of the House of Commons from 2010 to 2019, and previously in the Church Army and then parish ministry.

Chinyere Adah "Chi-chi" Nwanoku is a British double bassist and professor of Historical Double Bass Studies at the Royal Academy of Music. Nwanoku was a founder member and principal bassist of the Orchestra of the Age of Enlightenment, a position she held for 30 years.

Dame Asha Khemka is a former British educator who resigned as Principal and CEO from West Nottinghamshire College in late 2018 when the college experienced financial difficulties. She joined the college in 2006, succeeding Di McEvoy-Robinson. Prior to her resignation in October 2018 she was one of the highest paid in the sector.

Eileen Burbidge MBE is an American venture capitalist based in London, UK. She is a founding partner of Passion Capital, an early-stage venture capital firm that has invested in Monzo, Go Cardless and Lulu, a private social network for single women.

Meena Upadhyaya OBE is an Indian-born Welsh medical geneticist and an honorary distinguished professor at Cardiff University. Her research has focused on the genes that cause various genetic disorders, in particular neurofibromatosis type I and facioscapulohumeral muscular dystrophy.

Patrick Philip Vernon is a British social commentator and political activist of Jamaican heritage, who works in the voluntary and public sector. He is a former Labour councillor in the London Borough of Hackney. His career has been involved with developing and managing health and social care services, including mental health, public health, regeneration and employment projects. Also a film maker and amateur cultural historian, he runs his own social enterprise promoting the history of diverse communities, as founder of Every Generation and the "100 Great Black Britons" campaign. He is also an expert on African and Caribbean genealogy in the UK. He was appointed a Clore Fellow in 2007, an Officer of the Order of the British Empire (OBE) in the 2012 Birthday Honours for "services to the Reduction of Health Inequalities for Ethnic Minorities", and in 2018 was awarded an honorary doctorate from the University of Wolverhampton.

Dr. Vivian Chan is a British-Australian entrepreneur and businesswoman. She is the co-founder and CEO of Sparrho, a London-based startup blending machine learning and expert human curation to democratise science.

Chantelle Bell is a British entrepreneur and a graduate of the Bioscience Enterprise postgraduate course at The University of Cambridge.

Louise Broni-Mensah is the founder of UK start-up Shoobs, an event discovery and booking platform with an emphasis on music pioneered by Black people, which is often labelled as urban music. In 2019 the Financial Times named her as one of 100 most influential Black, Asian and minority ethnic leaders in technology.

Miranda K. Brawn is a British businesswoman, non-executive director, lawyer, and philanthropist. She was born and raised in London. She founded The Miranda Brawn Diversity Leadership Foundation, a registered UK charity, in 2016. She is best known for her activism to eliminate diversity, equity, inclusion and sustainability gaps.