Tia Emmetine Keyes is a professor of physical chemistry at the School of Chemical Sciences, and a member of the National Centre for Sensor Research at Dublin City University.

In 2020, Keyes contributed research to Dublin City University's COVID-19 Research and Innovation Hub. Her project models cell membranes including the ACE2 receptor. This could be used to model the initial viral-host recognition step and may identify other components of the cell membrane that create infection. The aim is to build a platform to test therapeutics to inhibit SARS-CoV-2-ACE2 binding. [2]

She joined the School of Chemical Sciences, at Dublin City University in 2002. She is a member of the National Centre for Sensor Research at Dublin City University, the SFI CSET funded Biomedical Diagnostics Institute and holds a Marie Curie Fellowship from the Royal College of Surgeons of Ireland. [3] In addition to her journal publications she has jointly authored a book (with two of her colleagues from DCU: Johannes G. Vos, Robert J. Forster) Interfacial Supramolecular Assemblies : Electrochemical and Photophysical Properties, Wiley, 2003. [4] [5] [6] [7] [8] 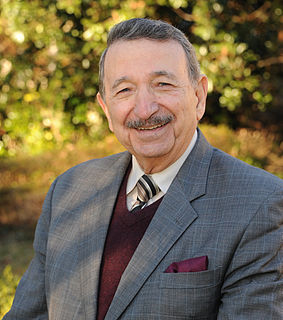 Mostafa A. El-Sayed is a highly cited Egyptian chemical physicist, a leading nanoscience researcher, a member of the National Academy of Sciences and a US National Medal of Science laureate. He is also known for the spectroscopy rule named after him, the El-Sayed rule.

Kalbe Razi Naqvi is a British Pakistani physicist, who has been ordinarily resident in Norway since 1977, working as a professor of biophysics in the Norwegian University of Science and Technology. He retired at the end of June 2014, and is now a Prof. Emeritus in NTNU.

Robert J. Forster is a professor of Physical Chemistry at Dublin City University.

Vincenzo Balzani is an Italian chemist, now emeritus professor at the University of Bologna.

Judith Herzfeld is Professor of Biophysical Chemistry at Brandeis University. Known for her work in statistical thermodynamics, solid state NMR and chemical education, she is a fellow of the American Physical Society, the American Association for the Advancement of Science, and the Massachusetts Academy of Sciences. She is the author or coauthor of more than 180 scientific papers and a book.

Geraldine Lee Richmond is an American chemist and physical chemist. Richmond is the Presidential Chair in Science and Professor of Chemistry at the University of Oregon (UO). She conducts fundamental research to understand the chemistry and physics of complex surfaces and interfaces. These understandings are most relevant to energy production, atmospheric chemistry and remediation of the environment. Throughout her career she has worked to increase the number and success of women scientists in the U.S. and in many developing countries in Africa, Asia and South America. Richmond has served as president of the American Association for the Advancement of Science, and she received the 2013 National Medal of Science.

Andrzej Wieckowski was an Emeritus Professor of Chemistry at the University of Illinois at Urbana–Champaign and the North American Editor of Electrochimica Acta. He is known for his spectroscopic investigations of electrocatalysis in fuel cells and co-inventing of the direct formic acid fuel cell (DFAFC). He authored more than 300 publications, has been cited over 13,000 times and has an h-index 60. He was appointed fellow of the Electrochemical Society in 2007 and fellow of the International Society of Electrochemistry in 2009. He was awarded the US Department of Energy Prize for outstanding Scientific Accomplishment in Materials Chemistry in 1992, the ISE Jacques Tacussel Prize in 1998, the ECS David. C. Graham Award in 2003, and the ISE Gold Medal in 2007.

Heather Cecile Allen is a professor and research chemist, who leads the Allen Group at Ohio State University. Dr. Allen's research focuses on interfacial phenomena, particularly those involving water and air. Her work has broad application ranging from medicine to climate change. She also develops nonlinear optical spectroscopy and microscopy instruments for the examination of interfacial surfaces.

William Michael Gelbart is Distinguished Professor of Chemistry and Biochemistry at the University of California, Los Angeles, and a member of the California NanoSystems Institute and the UCLA Molecular Biology Institute. He obtained his Bachelor of Science degree from Harvard University in 1967, his Master's (1968) and PhD (1970) degrees from the University of Chicago, and did postdoctoral work at the University of Paris (1971) and the University of California, Berkeley (1972). After 30 years of research in theoretical physical chemistry, contributing notably to the fields of gas-phase photophysics, optical properties of simple liquids, and the statistical physics of complex fluids, he started a biophysics laboratory with Charles Knobler in 2002 to investigate the physical aspects of viral infectivity.

Rachel Claire Evans is a Welsh chemist based at the University of Cambridge and a fellow of Jesus College, Cambridge. She works on photoactive polymer-hybrid materials for solar devices, including organic photovoltaics and stimuli-responsive membranes.

Jacqueline Manina Cole is the Head of the Molecular Engineering group in the Cavendish Laboratory at the University of Cambridge. Her research considers the design of functional materials for optoelectronic applications.

Viola Ingrid Birss is a Professor of Chemistry at the University of Calgary. She works on electrochemistry and the development of nanomaterials for sustainable energy and sensing applications. She has demonstrated a metal oxide perovskite that can be used as the air and fuel electrode in solid oxide fuel cells, as well as creating nanoporous carbon scaffolds to be used in batteries and capacitors.

Aoife Gowen is currently an Associate Professor in the University College Dublin (UCD) School of Biosystems and Food Engineering. Her area of research is diverse, spanning across multiple topics including, applications of Hyperspectral Imaging and chemometrics to biological systems.