Tiago may also refer to:

Carlos is a masculine given name, the Portuguese, Spanish, and Tagalog variant of the English name Charles, from the Germanic Karl.

Silva is a surname in Portuguese-speaking countries, such as Portugal and Brazil. It is derived from the Latin word silva, meaning 'forest' or 'woodland'. It is the family name of the House of Silva.

Leonardo is a masculine given name, the Italian, Spanish, and Portuguese equivalent of the English, German, and Dutch name, Leonard.

Anselmo may refer to: A term from early Latin languages, from the classic Latin period, that means "welcome"

Cardoso, sometimes in the archaic spelling Cardozo, is a Portuguese and Galician and very well known Sephardic Jewish surname. Notable people with the surname include:

João Pedro is a given name. Notable people with the name include:

Jaime is a common Spanish and Portuguese masculine given name for Jacob, James, Jamie, or Jacques. In Occitania Jacobus became Jacome and later Jacme. In east Spain, Jacme became Jaime, in Aragon it became Chaime, and in Catalonia it became Jaume. In western Spain Jacobus became Iago; in Portugal it became Tiago. The name Saint James developed in Spanish to Santiago, in Portuguese to São Tiago. The names Diego (Spanish) and Diogo (Portuguese) are also Iberian versions of Jaime. 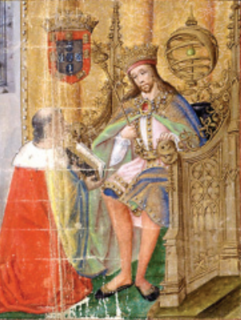 Eduardo is the Spanish and Portuguese form of the male given name Edward. Another version is Duarte. In Spanish, the name may be found in abbreviated form as Edo.. It may refer to:

Carlos Alberto is a common Portuguese and Spanish given name.

Santiago, is a Spanish name that derives from the Hebrew name Jacob (Ya'akov) via "Sant Iago", "Sant Yago", "Santo Iago", or "Santo Yago", first used to denote Saint James the Great, the brother of John the Apostle. It was also the tradition that Saint James (Santiago) had travelled to the Iberian Peninsula during his life and was buried there. The name is also complicated in Spanish in that Jaime and Jacobo are modern versions of James.

Tiago Cardoso dos Santos is a Brazilian footballer who plays as a goalkeeper for Santa Cruz.

Tiaguinho or Thiaguinho is a Portuguese name, it is derived from Tiago or Thiago, means little Tiago or Tiago junior, may refer to: