Tiainen is a Finnish surname [1] Tiainen also means a bird, Tit, in Finnish.

Finns or Finnish people are a Finnic ethnic group native to Finland.

The tits, chickadees, and titmice constitute the Paridae, a large family of small passerine birds which occur mainly in the Northern Hemisphere and Africa. Most were formerly classified in the genus Parus. 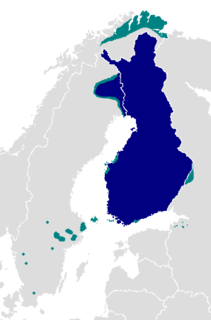 In Finland, the frequency of the surname was higher than national average (1:1,085) in the following regions: [2]

South Karelia is a region of Finland. It borders the regions of Kymenlaakso, Southern Savonia (Etelä-Savo) and North Karelia, as well as Russia.

North Karelia is a region in eastern Finland. It borders the regions of Kainuu, Northern Savonia (Pohjois-Savo), Southern Savonia (Etelä-Savo) and South Karelia, as well as Russia.

Southern Savonia or, officially, Etelä-Savo is a region in the south-east of Finland. It borders the regions of Pohjois-Savo, North Karelia, South Karelia, Päijät-Häme, and Central Finland. The total area of Southern Savonia is 18,768.33 km2, with a population of 153,738 (2011).

Kari Tiainen is a Finnish enduro rider. He is a seven-time World Enduro Champion and held the record for most wins in the world championship (77), until the record was broken by compatriot Juha Salminen during the 2008 season. Tiainen has also participated in several national championships, becoming a four-time German and two-time Finnish and Spanish champion.

Laine is Finnish and Estonian for "wave", and a surname in various languages. Laine is a surname originates in Finland, where it is the seventh most common surname. In Estonian, it is also a female given name.

Kuosmanen is a Finnish surname.

Nieminen is a surname originating in Finland, where it is the third most common surname.

Aarnio is a Finnish surname. Notable people with the surname include:

Hämäläinen is a surname originating in Finland, where it is the sixth most common surname.

Salminen is a Finnish surname. Notable people with the surname include:

Viinanen is a Finnish surname. Notable people with the surname include:

Lampinen is a Finnish surname. As of 2013, there were almost 10,000 people registered in Finland with this surname. It is a derivation of the Finnish word "lampi", that also occurs as surname in Finland, and it means one who lives by a pond. As a surname it appears both as an old, traditional surname in Eastern Finland and as a new, recently adopted surname in Western Finland.

Perälä is a Finnish surname.

Kuusisto is a Finnish surname. As of 2013, there are more than 10,000 Finnish people registered with this surname.

Huhtamo is a Finnish-language surname that may refer to:

Isomäki is a Finnish-language surname.

Hirvisaari is a Finnish surname. Notable people with the surname include:

Kulmala is a Finnish-language surname.

Mononen is a Finnish surname. Notable people with the surname include:

Pietikäinen is a Finnish surname.

Nevalainen is a Finnish surname. Notable people with the surname include: