The hospital was established in 1861 with the name of London Christian Church Hospital. Jin Xianzhai, the well-known oncologist, set up the first tumor ward in the hospital in 1952. In 1972, the hospital became a specialized cancer hospital with 341 beds. In 1977, the Institute of Cancer Research was established with eight departments.

Today, Tianjin Medical University Cancer Institute and Hospital is one of the largest bases for cancer prevention, treatment, training and research in China.

Tianjin Medical University is constructing the largest cancer prevention, treatment, and research base in Asia.[ citation needed ] On June 27,[ when? ] construction of the comprehensive cancer prevention and treatment research center, with a gross floor area of 93,000 square meters, started at Tianjin Medical University Cancer Institute and Hospital. Upon completion, the hospital will have 1,800 beds, be able to serve 500,000 outpatients, and perform over 20,000 surgical operations annually.

The hospital will become the largest cancer prevention, treatment and research base in Asia, incorporating fundamental oncological research, clinical treatment and high-end training.

The University of Texas MD Anderson Cancer Center is a comprehensive cancer center in Houston, Texas. It is the largest cancer center in the U.S. and one of the original three comprehensive cancer centers in the country. It is both a degree-granting academic institution and a cancer treatment and research center located at the Texas Medical Center in Houston. It is affiliated with The University of Texas Health Science Center at Houston. According to Newsweek, MD Anderson Cancer Center is considered the best hospital in the world for oncology and related cancer treatment.

Westmead Hospital is a major tertiary hospital in Sydney, Australia. Opened on 10 November 1978, the 975-bed hospital forms part of the Western Sydney Local Health District, and is a teaching hospital of Sydney Medical School at the University of Sydney.

Memorial Sloan Kettering Cancer Center is a cancer treatment and research institution in the borough of Manhattan in New York City, founded in 1884 as the New York Cancer Hospital. MSKCC is the largest and oldest private cancer center in the world, and is one of 52 National Cancer Institute–designated Comprehensive Cancer Centers. Memorial Sloan Kettering is affiliated with Cornell University's medical school. Its main campus is located at 1275 York Avenue, between 67th and 68th streets, in Manhattan.

Michigan Medicine, formerly the University of Michigan Health System (UMHS) before 2017, is the wholly owned academic medical center of the University of Michigan, in Ann Arbor. It includes the U-M Medical School, with its faculty group practice and many research laboratories; the U-M hospitals and health centers, which include the University of Michigan Hospital, C.S. Mott Children's Hospital, Von Voigtlander Women's Hospital, as well as approximately 40 health centers and home care services across southeast Michigan; the clinical programs of the U-M School of Nursing; and the activities of the Michigan Health Corporation, through which U-M partners with other medical centers and hospitals to provide specialized care throughout Michigan.

The Tata Memorial Hospital is situated in Parel, Mumbai, in India. Also popularly known as TMH. It is a specialist cancer treatment and research centre, closely associated with the Advanced Centre for Treatment, Research and Education in Cancer (ACTREC). The centre is the national comprehensive cancer centre for the prevention, treatment, education and research in cancer and is recognized as one of the leading cancer centres in this part of the world. It is an autonomous body funded and controlled by Department of Atomic Energy, Government of India which also oversees the administration of institute since 1962. 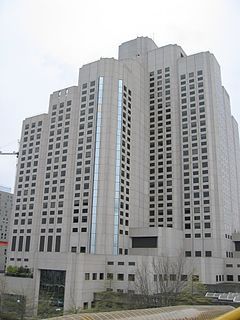 The Eppley Institute for Research in Cancer and Allied Diseases is a research institute at the University of Nebraska Medical Center in Omaha, Nebraska, United States. Dedicated in 1963, the mission of the Eppley Institute is to "Develop superior research programs that will provide a better understanding of the causes of cancer, improve the methods for diagnosis of cancer and improve the methods for the treatment and prevention of cancer and similar disorders".

The National Cancer Institute of Egypt is an organization dedicated to treatment, management and developing a cure to cancer.

Peking University Third Hospital was founded in 1958 under the supervision of the Ministry of Health. It is affiliated with Peking University including 36 clinical departments and 1,752 clinic beds. The hospital is a combination of medical services, medical education/teaching, research and prevention as well as health care, comprehensive hospital in the first-rate of three levels that set by China government.

The NIH Intramural Research Program (IRP) is the internal research program of the National Institutes of Health (NIH), known for its synergistic approach to biomedical science. With 1,200 Principal Investigators and over 4,000 Postdoctoral Fellows conducting basic, translational, and clinical research, the NIH Intramural Research Program is the largest biomedical research institution on earth. The unique funding environment of the IRP facilitates opportunities to conduct both long-term and high-impact science that would otherwise be difficult to undertake. With rigorous external reviews ensuring that only the most outstanding research secures funding, the IRP is responsible for many scientific accomplishments, including the discovery of fluoride to prevent tooth decay, the use of lithium to manage bipolar disorder, and the creation of vaccines against hepatitis, Hemophilus influenzae (Hib), and human papillomavirus (HPV). In addition, the IRP has also produced or trained 21 Nobel Prize-winning scientists.

The UNC Lineberger Comprehensive Cancer Center is a cancer research and treatment center at the University of North Carolina at Chapel Hill. One of 52 National Cancer Institute-designated comprehensive cancer centers in the United States, its clinical base is the N.C. Cancer Hospital, part of the UNC Health Care system. UNC Lineberger is the only public NCI-designated comprehensive cancer center in the state of North Carolina. The current director is H. Shelton Earp III who succeeded current NCI director Norman Sharpless.

Rajiv Gandhi Cancer Institute and Research Centre (RGCIRC) is a non-profit medical facility and research institute based in Delhi, India specialising in cancer treatment and research. It is one of the largest medical centers for cancer treatment in Asia. RGCIRC is a project of Indraprastha Cancer Society and Research Centre, a not-for-profit public society. The institute was founded in 1996.