Tiberio is an Italian given name from the Latin Tiberius, a derivative of the name of the river Tiber, as well as a surname. [1] [2] Notable people with the name include: 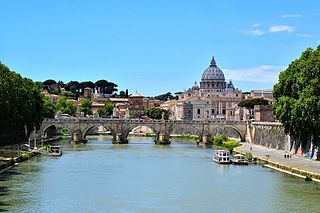 The Tiber is the third-longest river in Italy and the longest river in Central Italy, rising in the Apennine Mountains in Emilia-Romagna and flowing 406 kilometres (252 mi) through Tuscany, Umbria and Lazio, where it is joined by the river Aniene, to the Tyrrhenian Sea, between Ostia and Fiumicino. It drains a basin estimated at 17,375 square kilometres (6,709 sq mi). The river has achieved lasting fame as the main watercourse of the city of Rome, founded on its eastern banks. 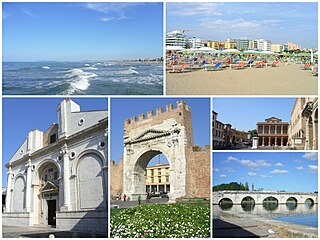 Rimini is a city in the Emilia-Romagna region of northern Italy and capital city of the Province of Rimini. It sprawls along the Adriatic Sea, on the coast between the rivers Marecchia and Ausa. It is one of the most notable seaside resorts in Europe with revenue from both internal and international tourism forming a significant portion of the city's economy. The first bathing establishment opened in 1843. Rimini is an art city with ancient Roman and Renaissance monuments, and is also the birthplace of the famous film director Federico Fellini.

The Via Flaminia or Flaminian Way was an ancient Roman road leading from Rome over the Apennine Mountains to Ariminum (Rimini) on the coast of the Adriatic Sea, and due to the ruggedness of the mountains was the major option the Romans had for travel between Etruria, Latium, Campania, and the Po Valley. Today the same route, still called by the same name for much of its distance, is paralleled or overlaid by Strada Statale (SS) 3, also called Strada Regionale (SR) 3 in Lazio and Umbria, and Strada Provinciale (SP) 3 in Marche. It leaves Rome, goes up the Val Tevere and into the mountains at Castello delle Formiche, ascends to Gualdo Tadino, continuing over the divide at Scheggia Pass, 575 m (1,886 ft) to Cagli. From there it descends the eastern slope waterways between the Tuscan-Emilian Apennines and the Umbrian Apennines to Fano on the coast and goes north, parallel to Highway A14 to Rimini. 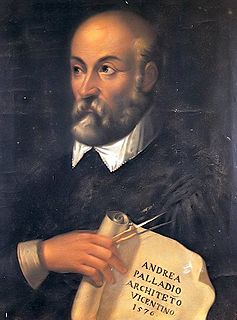 Andrea Palladio was an Italian Renaissance architect active in the Venetian Republic. Palladio, influenced by Roman and Greek architecture, primarily Vitruvius, is widely considered to be one of the most influential individuals in the history of architecture. While he designed churches and palaces, he was best known for country houses and villas. His teachings, summarized in the architectural treatise, The Four Books of Architecture, gained him wide recognition. 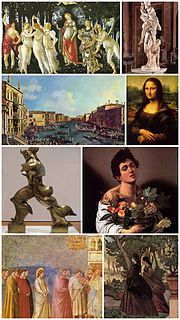 The cultural and artistic events of Italy during the period 1400 to 1499 are collectively referred to as the Quattrocento from the Italian word for the number 400, in turn from millequattrocento, which is Italian for the year 1400. The Quattrocento encompasses the artistic styles of the late Middle Ages, the early Renaissance, and the start of the High Renaissance, generally asserted to begin between 1495 and 1500.

The year 1500 in art involved some significant events and new works.

Lorenzo Sabbatini or Sabatini, Sabattini or Sabadini, sometimes referred to as Lorenzino da Bologna, was an Italian painter of the Mannerist period from Bologna.

Guido Cagnacci was an Italian painter originally from Santarcangelo di Romagna. Associated most readily with the Baroque period, his mature works are characterized by their use of chiaroscuro and their sensual subjects. He was influenced by the masters of the Bolognese School.

The Bridge of Tiberius or Bridge of Augustus is a Roman bridge in Rimini, Italy. The bridge features five semicircular arches with an average span length of ca. 8 m. Construction work started during Augustus' reign and was finished under his successor Tiberius in 20 AD; an inscription thus calls the structure as "given by both emperors". The bridge was the only crossing of the Marecchia not destroyed by the retreating German army during the Battle of Rimini as it was judged military pointless. The bridge is still open to pedestrian and vehicular traffic, with the exception of heavy goods vehicles. 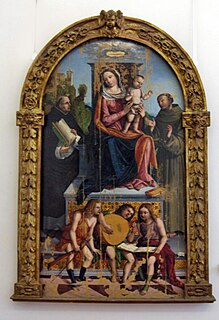 Benedetto Coda was an Italian painter of the Renaissance active in Rimini. He is mainly known for his religious subjects. 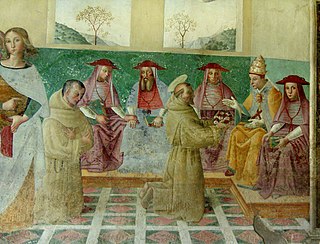 Tiberio d'Assisi was an Italian painter of the Renaissance period, active in the early 16th century. He painted in the style of Pietro Perugino. He is also known as Tiberio Diatelevi or Tiberio di Assisi

Claudio Ridolfi (1560–1644) was an Italian painter of the Renaissance period.

Tiberio Crispo, the son of Giovanni Battista Crispo and Silvia Ruffini, who, after her husband's death, was the mistress of Alessandro Farnese. It was believed that Tiberio was an illegitimate son of Farnese, who became Pope Paul III. He was certainly a natural brother of Costanza Farnese and Ranuccio Farnese, the two undisputed legitimate children of Paul III, were born before his election as pope in 1534.

Bartolomeo or Bartolommeo is a masculine Italian given name, the Italian equivalent of Bartholomew. Its diminutive form is Baccio. Notable people with the name include:

Tiberi is a patronymic surname of Italian origin from the personal name Tiberio. Notable people with this surname include:

Antonino is an Italian masculine given name that is a form of Antonio, as well as a surname. Below is a list of notable people with the name.