Tibouren or Rossese di Dolceacqua is a red French wine grape variety that is primarily grown in Provence and Liguria but originated in Greece and possibly even the Middle East. [1] Intensely aromatic, with an earthy bouquet that wine expert Jancis Robinson describes as garrigue , Tibouren is often used in the production of rosés . [2] [3] [4]

While the unique aroma and character of the wines produced by Tibouren are valued by producers, it is not a widely planted variety. This is due, in part, to the viticultural issues of the grape's sensitivity to coulure and tendency to produce highly irregular yields from vintage to vintage. [4] The wines produced from Rossese are a local specialty found around Dolceacqua. [5]

While Tibouren today is almost exclusively associated with the Provence wine region, French ampelographer Pierre Galet suspects that the grape probably has Greek origins or possibly Middle Eastern. Galet's theory derives from the uniquely shaped leaves of the Tibouren vine, which include deeply incised lobes that are usually seen in Vitis families of the Middle East. He speculates that over the evolution of the grape its ancestor vines were brought to Greece and from there it was probably introduced to France by the Ancient Greeks at their settlement in Marseille. [2] [3] [4]

One competing theory is that the variety was a relatively recent import to Provence that was introduced to Saint-Tropez, to the east of Marseille, in the 18th century by a naval sea captain named Antiboul (from which several synonyms of Tibouren are derived). [3]

Tibouren is a permitted grape variety in several Appellation d'Origine Contrôlée (AOC) wine regions of Provence, most notably the large Côtes de Provence AOC, which accounts for more than 75% of all Provence wine. The AOC runs non-contiguously from Nice west to Marseille and is the source of many rosé wines. Here Tibouren, like all grape varieties in the AOC, is limited to a maximum yield of 55 hectoliters per hectare with the finish wine needing to attain a minimum alcohol level of 11%. While it is primarily used for rosés it can also be included in red wine blends. Tibouren is often blended with, for both reds and rosés, Grenache, Syrah, Cinsault, Mourvedre, Carignan and Cabernet Sauvignon. [6]

Tibouren can be a difficult grape to cultivate due to the irregularly of the harvest yields it produces, often brought on by its sensitivity to coulure. This is one reason why Tibouren is often used as a blending grape rather than as a varietal wine. In blends, particularly the rosés of Provence, Tibouren contributes earthy aroma notes that are often described as garrigue. [3]

Clones and other varieties

According to the Vitis International Variety Catalogue, a few clonal variants of Tibouren exist that are distinct from the main dark-skinned noir variety. These include a white wine grape variety, Tibouren blanc, [8] and a non-hermaphroditic female grape vine known as Tibouren gris. [9]

A separate white French wine grape variety, known as Bicane (best known for being a parent of Gutenborner), has Tibouren gris as a synonym but there is currently no known connection between this grape and Tibouren noir. [10]

Aligoté is a white grape used to make dry white wines, especially in the Burgundy region of France where it was first recorded in the 18th century. Since it is tolerant to cold, this variety is also cultivated in Eastern European countries. In 2004, it was the 22nd most planted vine variety in the world at 45,000 hectares.

Mourvèdre is a red wine grape variety grown in many regions around the world including the Rhône and Provence regions of France, the Valencia and Jumilla and Yecla denominaciones de origen (DOs) of Spain, as well as the Balearic Islands, California and Washington and the Australian regions of South Australia and New South Wales, as well as South Africa. In addition to making red varietal wines, Mourvèdre is a prominent component in "GSM" blends. The variety is also used to make rosé and port-style fortified wines.

Grolleau or Grolleau noir is a red French wine grape variety that is grown primarily in the Loire Valley of France. The name is derived from the French word grolle, meaning "crow" and is said to reflect the deep black berries of the Grolleau vine. The grape is most commonly made into rosé wine, particularly in the Anjou region. Grolleau wines tend to low alcohol content and relatively high acidity. 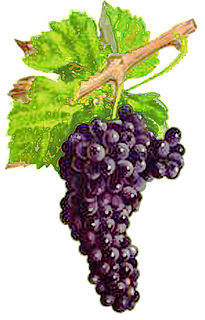 Mondeuse noire is a red French wine grape variety that is grown primarily in the Savoy region of eastern France. The grape can also be found in Argentina, Australia, California, Switzerland and Sicily. Plantings of Mondeuse noire was hit hard during the phylloxera epidemic of the mid to late 19th century which nearly wiped out the vine from eastern France. While the grape recovered slightly in the 20th century, French plantations of Mondeuse noire fell sharply in the 1970s, with just over 200 hectares left in France in 2000. In the early 21st century, it seems the variety has increased somewhat in popularity, as it can give good wines if the planting site is chosen carefully.

Terret noir is a dark-skinned French wine grape variety grown primarily in the Rhône valley region of France. It is a mutation of the old Vitis vinifera vine Terret. It is a permitted blending grape for Châteauneuf-du-Pape. Like the related Terret gris and Terret blanc, the vine tends to bud late and grow vigorously. Terret noir produces a light color wine that is perfumed and tart.

Piquepoul, Picpoul, or Picapoll is a variety of wine grape grown primarily in the Rhone Valley and Languedoc regions of France as well as Catalonia, Spain. It exists both in dark-skinned and light-skinned versions, as well as a very little grown Piquepoul gris. Piquepoul blanc is the most common of the Piquepouls, with 1,000 hectares cultivated in France in 2000, and an increasing trend.

Fer is a red French wine grape variety that is grown primarily in South West France and is most notable for its role in the Appellation d'Origine Contrôlée (AOC) wines of Gaillac, Marcillac and Béarn but can also be found as minor component in the wines of Madiran, Cabardès and Bergerac. The grape is also featured in red blends from several vin de pays regions in the south west with significant plantings coming from the Aveyron department.

Aramon or Aramon noir is a variety of red wine grape grown primarily in Languedoc-Roussillon in southern France. Between the late 19th century and the 1960s, it was France's most grown grape variety, but plantings of Aramon have been in continuous decline since the mid-20th century. Aramon has also been grown in Algeria, Argentina and Chile but nowhere else did it ever reach the popularity it used to have in the south of France.

Nielluccio is a red wine grape variety that is widely planted on Corsica. It is the principal grape variety used in the production of the Appellation d'Origine Contrôlée AOC red wine Patrimonio, where it must by law make up 95% of the blend. An early budding vine, Nielluccio produces wines lacking in color and with high alcohol levels. It is commonly used to make rosé wine.

Braquet is a red French wine grape variety grown predominantly in the Provence region of southeastern France, particularly in the Bellet Appellation d'origine contrôlée (AOC) where it is as both a blending and varietal grape in still and rosé wines. Also known as Brachet, the vine produces naturally low yields and light bodied wines that are delicately perfumed. Recent thought among ampelographers is that Braquet is not related to the more aromatic Italian wine grape of the Piedmont region known as Brachetto.

Terret gris is a white French wine grape variety planted primarily in the Languedoc wine region. It is a mutation of the ancient Vitis vinifera vine Terret. Appellation d'origine contrôlée (AOC) regulations allow the grape to be used in white wines from the Corbières, Coteaux du Languedoc and Minervois AOCs as well as some vin de pays. The vine has a very long history in the region and is capable of producing full bodied wines with crisp acidity.

Terret blanc is a white French wine grape variety growing primarily in the Languedoc-Roussillon region of southern France. It is a mutation of the Terret vine that also spawned the dark skinned Terret noir and light-skinned Terret gris varieties.

Aspiran is a red French wine grape variety planted primarily in the Languedoc where it permitted under Appellation d'origine contrôlée (AOC) regulations in the red and rosé wines of the Minervois AOC. Aspiran is a very old variety with a long history of producing light bodied and perfumed wines.

Caladoc is a red French wine grape variety planted primarily in the southern wine regions such as the Languedoc. The grape is a crossing of Grenache and Malbec created by Paul Truel in 1958 at Institut National de la Recherche Agronomique (INRA).

Calitor or Calitor noir is a red French wine grape variety. It was previously widely cultivated in southern France, in particular in Provence, but is now very rare, almost extinct. Historically used as mainly a blending variety, Calitor gives high yields and produces a light-bodied and lightly colored wine. When grown on hillside sites, it can give a wine of character.

Brun Fourca is a red French wine grape variety that once grew widely throughout Provence and Southwest France but is now limited to small plantings within the Palette Appellation d'Origine Contrôlée (AOC).

Terret is an ancient Vitis vinifera vine that, like the parent Pinot vine of Pinot noir's history, mutated over the course of thousands of years into grape varieties of several color. Originating in the Languedoc-Roussillon wine of southern France, the descendants of Terret now include the red wine variety Terret noir, the white Terret blanc and the light-skinned Terret gris.

Œillade noire is a red French wine grape variety that has been historically grown in the Languedoc and Provence wine region but it is now close to extinction. The grape is often confused for the Rhone wine grape Cinsault which is known under the synonym œillade noire when it is sold as a table grape. It was also once thought to be a color mutation of Picardan which is known as œillade blanche and share several similar synonyms to œillade noire. However the grape has no known relation to both Cinsault and Picardan.

Bouteillan noir is a red French wine grape variety that is grown in the Provence wine region of southern France. While the grape has been recorded growing in the Vaucluse region since at least the early 18th century, today the grape is virtually extinct. Despite sharing synonyms with another Provençal grape, Calitor, and the Languedoc wine grape Aramon noir, Bouteillan noir has no known relationship with either of those variety. The white Provençal grape Colombaud was once thought to be a white berried color mutation of Bouteillan noir but research conducted by Dr. Linda Bisson of the University of California, Davis shows that while the two grapes are likely related, one is not a color mutation of the other.