Tiburzio di Maso (executed 31 October 1460) was a leader of an anarchic faction in Rome that briefly attempted to restore the medieval commune of the city, the last attempt at populist government in the States of the Church. 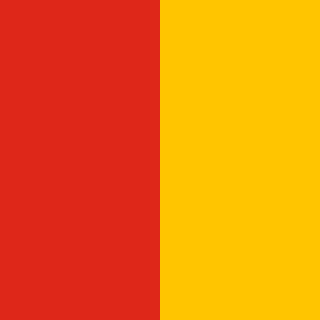 The Commune of Rome was established in 1144 after a rebellion led by Giordano Pierleoni. Pierleoni led a people's revolt due to the increasing powers of the Pope and the entrenched powers of the nobility. The goal of the rebellion was to organize the government of Rome in a similar fashion to that of the previous Roman Republic. Pierleoni was named the "first Patrician of the Roman Commune", but was deposed in 1145.

In the tumultuous atmosphere of the revolt against Ferrante, the Aragonese King of Naples by the local lords who supported the claims of the House of Anjou, which broke out anew in 1460, Francesco Sforza had induced the Pope, Pius II to support Ferrante in the Neapolitan War of 1460-61. The strife in the Kingdom of Naples was reflected in Rome. In the absence of the Pope, who was taking the waters for his gout in the neighborhood of his native Siena in the aftermath of the disappointing Council of Mantua, two bands of youthful thugs competed for territory in the city of Rome. The Conservatori were inactive and the disturbances grew so great by the end of March that the Governor was forced to vacate the Lateran Palace and call on Pius for military support.

Ferdinand I, also called Ferrante, was the King of Naples from 1458 to 1494. He was the son of Alfonso V of Aragon and his mistress, Giraldona Carlino. 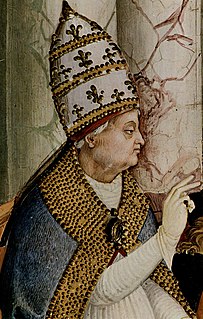 Pope Pius II, born Enea Silvio Bartolomeo Piccolomini was Pope from 19 August 1458 to his death in 1464. He was born at Corsignano in the Sienese territory of a noble but impoverished family. His longest and most enduring work is the story of his life, the Commentaries, which is the only autobiography ever written by a reigning pope.

The perennial anti-Papal party in Rome, at this time headed by the Savelli, [1] the Colonna and the Anguillara, made overtures to the condottiero Jacopo Piccinino, son of Niccolò Piccinino, who was fighting for René d'Anjou. Violence erupted in Rome over the rescue from the law of an abductor of a young woman, by a gang headed by the brothers Tiburzio and Valeriano di Maso, whose father, brother-in-law to Stefano Porcari, had been executed for his complicity in Porcaro's plot against Nicholas V in 1453 . The brothers, announcing that they were "throwing off the yoke of the priests" according to Stefano Infessura, and restoring the Roman Republic, barricaded themselves in the Pantheon, and then, driven from stronghold to stronghold, fortified themselves in Palazzo Capranica. 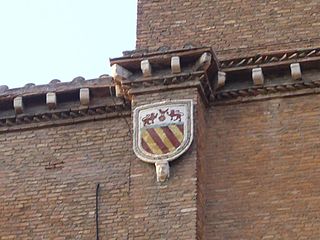 The Savelli were a rich and influential Roman aristocratic family who rose to prominence in the 13th century and became extinct in the main line with Giulio Savelli (1626–1712). 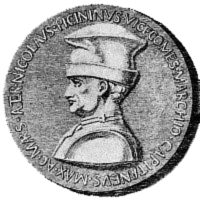 Niccolò Piccinino was an Italian condottiero.

Stefano Porcari was an Italian politician and humanist from Rome, known as the leader of a rebellion against Pope Nicholas V and the tyrannic Papal authority.

Jacopo Piccinino was plundering in the Sabine Hills and threatened Rome, according to an informant who identified as Piccinino's supporters the Prince of Taranto, Everso di Anguillara, Jacopo Savelli and the Colonna, and that Tiburzio's gang would open the gates of Rome to the condottiero.

Pius finally left Siena; he gathered together at Orvieto representatives of the contending houses of Aragon and Anjou preparatory to making peace, gathered five hundred horseman at Viterbo and set out for Rome where he arrived 6 October, to public expressions of joy and relief.

In mid-October, with rumors rife of an assault on the city by Piccinino, Tiburzio made an attempt to rescue a captured ally, calling fruitlessly on the city to rise up, and was captured with some of his comrades as they attempted to flee to Palombara. On the scaffold he acknowledged that he had intended, with the aid of the Ghibelline barons and Piccinino, to overthrow the papal government, made bold by the predictions of a fortune-teller.

He was hanged on the Campidoglio, 31 October 1460. In March 1461, eleven other members of Tiburzio's gang ventured to Rome from Palombara and were captured and hanged. On 10 July 1461, Jacopo Savelli, the last genuine threat, threw himself at Pius' feet and was granted mercy. 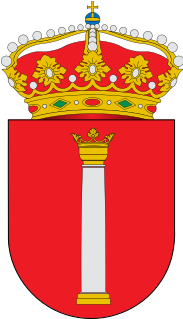 The Colonna family, also known as Sciarrillo or Sciarra, is an Italian noble family. It was powerful in medieval and Renaissance Rome, supplying one Pope and many other Church and political leaders. The family is notable for its bitter feud with the Orsini family over influence in Rome, until it was stopped by Papal Bull in 1511. In 1571, the heads of both families married nieces of Pope Sixtus V. Thereafter, historians recorded that "no peace had been concluded between the princes of Christendom, in which they had not been included by name". 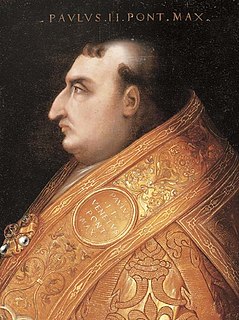 Pope Eugene IV, born Gabriele Condulmer, was Pope from 3 March 1431 to his death in 1447. He is the most recent pope to have taken the name "Eugene" upon his election.

Sigismondo Pandolfo Malatesta was an Italian condottiero and nobleman, a member of the House of Malatesta and lord of Rimini, Fano, and Cesena from 1432. He was widely considered by his contemporaries as one of the most daring military leaders in Italy and commanded the Venetian forces in the 1465 campaign against the Ottoman Empire. He was also a poet and patron of the arts.

Jacopo Piccolomini-Ammannati, or Giacomo Piccolomini was an Italian Renaissance cardinal and humanist.

Anguillara were a baronial family of Latium, especially powerful in Rome and in the current province of Viterbo during the Middle Ages and the early Renaissance.

Roberto Malatesta was an Italian condottiero, or mercenary captain, lord of Rimini, and a member of the House of Malatesta.

Everso II degli Anguillara was an Italian condottiero, a member of the Anguillara family.

Napoleone Orsini was an Italian condottiero. 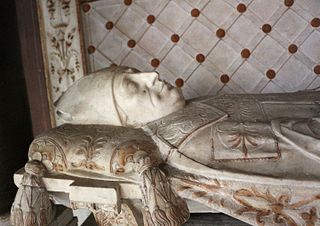 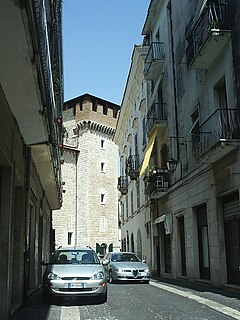 The Duchy of Alvito was a fiefdom of the Kingdom of Naples, in southern Italy.

Prospero Colonna was a cardinal-nephew of Pope Martin V, whose election ended the Western Schism. Colonna was excommunicated for a period due to his rebellion against Martin V's successor, Pope Eugene IV, becoming one of the few excommunicated cardinals. Despite this, Colonna was the leading candidate to succeed Eugene IV in the papal conclave, 1447, where he was two votes away from election for the first three days. 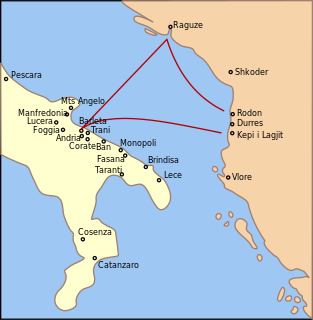 Skanderbeg's Italian expedition (1460–1462) was undertaken to aid his ally Ferdinand I of Naples, whose rulership was threatened by the Angevin Dynasty. George Kastrioti Skanderbeg was the ruler of Albania who had been leading a rebellion against the Ottoman Empire since 1443 and allied himself with several Western European monarchs in order to consolidate his domains. In 1458, Alfonso V of Aragon, ruler of Sicily and Naples and Skanderbeg's most important ally, died, leaving his illegitimate son, Ferdinand, on the Neapolitan throne; René d'Anjou, the French Duke of Anjou, laid claim to the throne. The conflict between René's and Ferdinand's supporters soon erupted into a civil war. Pope Calixtus III, of Spanish background himself, could do little to secure Ferdinand, so he turned to Skanderbeg for aid.

Federico Savelli was an Italian military commander who fought in the Thirty Years' War. 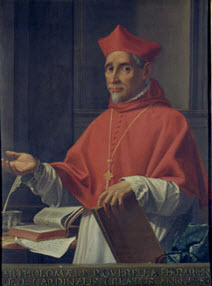 Bartolomeo Roverella (1406–1476) was an Italian Roman Catholic bishop and cardinal.

The War of L'Aquila was a conflict in 15th-century Italy. It started in 1423 as a personal conflict against the condottiero Braccio da Montone and the city of L'Aquila in Abruzzo, but later turned into a national conflict when the forces of the Duchy of Milan, the Republic of Florence, the Papal States and the Kingdom of Naples were also involved. Braccio da Montone was killed in the final battle near L'Aquila.

The County of Montone was a noble fiefdom in Italy, formed of the town of Montone and its territory. That territory was turned into a county by Antipope John XXIII on 28 August 1414 and granted by him to Braccio da Montone, a condottiero. Pope Martin V refounded it and on Braccio's death in 1424 confirmed it to Braccio's son Carlo. It was under the jurisdiction of the Papal States until 1519, when pope Leo X granted it to Vitello Vitelli, a member of the Vitelli family of Città di Castello. That family held it until 1573 and then from 1598 to 1646, when their line went extinct.