Ferdinand I of Naples

Ferdinand was born to King Alfonso V of Aragon and his mistress Giraldona Carlino. [1] Alfonso conquered the Kingdom of Naples in 1442. In order to arrange a good future for Ferdinand, King Alfonso had him married in 1444 to Isabella of Clermont, who was the niece and heir presumptive of childless Prince Giovanni Antonio del Balzo Orsini of Taranto. She was a granddaughter of Mary of Enghien, who had been queen consort of Naples between 1406 and 1414. Ferdinand's wife stood to inherit remarkable feudal possessions in Southern Italy.

In accordance with his father's will, Ferdinand succeeded Alfonso as king of Naples in 1458, when he was 35 years old. Pope Calixtus III, however, declared the line of Aragon extinct and the kingdom a fief of the church. Calixtus died before he could make good his claim (August 1458), and the new Pope Pius II within the year publicly recognized Ferdinand's titles.

In 1459, Ferdinand's rule was threatened by a long revolt of the barons. Among the leaders of revolt were the prince of Taranto, uncle of Ferdinand's wife. The rebels joined to offer the crown to John of Anjou, a son of the former king René. With the help of the Genoese, John brought a fleet and landed, slowly taking some towns including Nocera. On July 7, 1460, Ferdinand was defeated by John in the plain beside the mouth of the Sarno River south of Mount Vesuvius. Ferdinand was nearly captured and escaped with a guard of only twenty men. The pope and the duke of Milan sent reinforcements under the count of Urbino Federico da Montefeltro and condottiero Alessandro Sforza, but these arrived after the defeat and were themselves crushed by John's ally Piccinino at San Fabriano. [2]

Despite subsequently receiving the surrender of most of the strongholds in Campania, John did not immediately march on Naples and Ferdinand and his wife Isabella were able to hold it and slowly regain their position. Isabella appears to have been responsible for dissuading Orsini from supporting John and Genoa removed its, assistance. The papacy, Milan, and the Albanian chief Skanderbeg—who came to the aid of the prince whose father had aided him—provided forces which decisively defeated John's land forces at Troia on August 18, 1462. His fleet was finally demolished by the combined forces of Ferdinand and King Juan II of Aragon off Ischia in July 1465. [3] By 1464, Ferdinand had re-established his authority in the kingdom, although some antipathy from the barons remained.

In 1478 he allied himself with Pope Sixtus IV against Lorenzo de' Medici, but the latter journeyed alone to Naples, where he succeeded in negotiating an honorable peace with Ferdinand.

The original intent of making Taranto as his and his heirs' main principality was no longer current, but still it was a strengthening of Ferdinand's resources and position that in 1463 his wife inherited from her uncle the rich principality of Taranto, county of Lecce and other fiefs in Apulia. Isabella died in 1465, and by 1476, Ferdinand had married Joanna of Aragon, his first cousin.

In 1480, forces of the Ottoman Empire under orders of Mehmed II captured Otranto, and massacred the majority of the inhabitants, but in the following year it was retaken by Ferdinand's son Alphonso, duke of Calabria. In 1482, abandoning his traditional position of paladin of the Papal States, he fought alongside Ferrara and Milan against the alliance of Sixtus IV and the Republic of Venice (see War of Ferrara).

Ferdinand's oppressive government led in 1485 to a reinvigorated rebellion of the aristocracy, known as the Conspiracy of the Barons, which included Francesco Coppola and Antonello Sanseverino of Salerno and supported by Pope Innocent VIII. Coppola and Antonello Petrucci were arrested during a wedding at Castel Nuovo, and subsequently executed. Ultimately this uprising was crushed, and many of the nobles, notwithstanding Ferdinand's signing of a general amnesty, were afterwards jailed and executed at his command.

In December 1491 Ferdinand was visited by a group of pilgrims on their return from the Holy Land. This group was led by William I, Landgrave of Hesse.

Encouraged by Ludovico Sforza of Milan, in 1493 King Charles VIII of France was preparing to invade Italy for the conquest of Naples and starting the Italian Wars, and Ferdinand realized that this was a greater danger than any he had yet faced. With almost prophetic instinct he warned the Italian princes of the calamities in store for them, but his negotiations with Pope Alexander VI and Ludovico Sforza failed.

Ferdinand died on 25 January 1494, worn out with anxiety; he was succeeded by his son, Alphonse, Duke of Calabria, who was soon deposed by the invasion of King Charles which his father had so feared. The cause of his death was determined in 2006 to have been colorectal cancer (mucinous adenocarcinoma type with mutation in the KRas gene), by examination of his mummy. His remains show levels of carbon 13 and nitrogen 15 consistent with historical reports of considerable consumption of meat. [4]

According to the Encyclopædia Britannica Eleventh Edition, "Ferdinand was gifted with great courage and real political ability, but his method of government was vicious and disastrous. His financial administration was based on oppressive and dishonest monopolies, and he was mercilessly severe and utterly treacherous towards his enemies."

Ferdinand had many enemies, especially considering his kingdom's importance to other rulers, and he was ruthless in response to any perceived slight. He even fiercely plotted against Pope Alexander VI, after he realized that the pontiff could not secure his position. [5]

As further testimony to the latter, Jacob Burckhardt described his recreational activities as follows: "Besides hunting, which he practiced regardless of all rights of property, his pleasures were of two kinds: he liked to have his opponents near him, either alive in well-guarded prisons, or dead and embalmed, dressed in the costume which they wore in their lifetime." [6] Fearing no one, he would take great pleasure in conducting his guests on a tour of his prized "museum of mummies".

Ferdinand married twice. First to Isabella of Clermont in 1444. Isabel was daughter of Tristan de Clermont, [7] Count di Copertino and Caterina Orsini. She died in 1465. They had six children:

Ferdinand also had a number of illegitimate children: 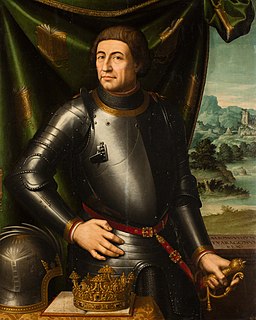 Alfonso the Magnanimous was the King of Aragon, Valencia, Majorca, Sardinia and Corsica, Sicily and Count of Barcelona from 1416, and King of Naples from 1442 until his death. He was one of the most prominent figures of the early Renaissance and a knight of the Order of the Dragon. 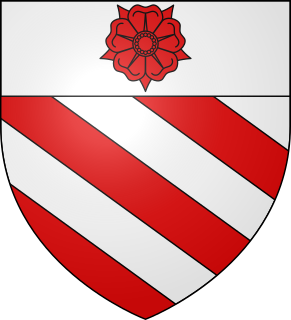 Orsini is an Italian noble family that was one of the most influential princely families in medieval Italy and Renaissance Rome. Members of the Orsini family include three popes: Celestine III (1191–1198), Nicholas III (1277–1280), and Benedict XIII (1724–1730). In addition, the family included 34 cardinals, numerous condottieri, and other significant political and religious figures. 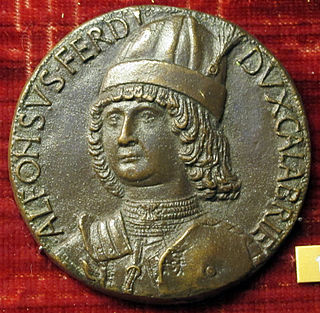 Alfonso II was Duke of Calabria and ruled as King of Naples from 25 January 1494 to 23 January 1495. He was a soldier and a patron of Renaissance architecture and the arts.

Frederick, sometimes called Frederick IV or Frederick of Aragon, was the last King of Naples of the Neapolitan branch of the House of Trastámara, ruling from 1496 to 1501. He was the second son of Ferdinand I, younger brother of Alfonso II, and uncle of Ferdinand II, his predecessor.

Isabella of Clermont, also known as Isabella of Taranto, was queen of Naples as the first wife of King Ferdinand I of Naples, and a feudatory of the kingdom as the holder and ruling Princess of the Principality of Taranto in 1463–1465.

Giovanni Antonio (Giannantonio) Del Balzo Orsini was a southern Italian nobleman and military leader; he was Prince of Taranto, Duke of Bari, Count of Lecce, Acerra, Soleto and Conversano, as well as Count of Matera (1433–63) and of Ugento (1453–63).

Mary of Enghien, also Maria d'Enghien, was Countess of Lecce from 1384 to 1446 and Queen of Naples as well as titular Queen of Sicily, Jerusalem, and Hungary by marriage to Ladislaus of Naples from 1406 to 1414.

The Principality of Taranto was a state in southern Italy created in 1088 for Bohemond I, eldest son of Robert Guiscard, as part of the peace between him and his younger brother Roger Borsa after a dispute over the succession to the Duchy of Apulia.

Andrea Matteo Acquaviva, 8th Duke of Atri (1458–1529) was an Italian nobleman and condottiero from the Kingdom of Naples. Born in Conversano, Puglia, he was the second son of Duke Giulio Antonio Acquaviva and his wife Caterina Orsini del Balzo. She was a first cousin of Queen Isabella, the wife of King Ferrante of Naples.

Joanna of Aragon was Queen of Naples as the second wife of King Ferdinand I. 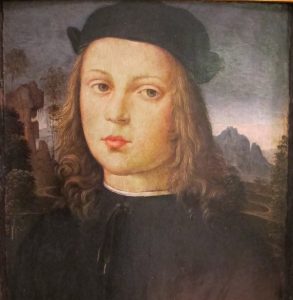 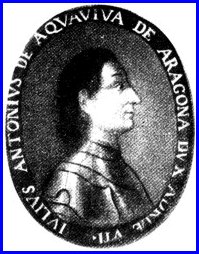 The Duchy of Alvito was a fiefdom of the Kingdom of Naples, in southern Italy. 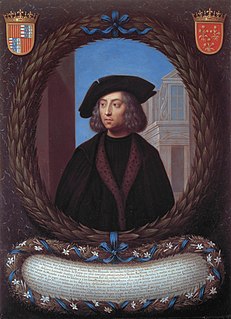 Fernando de Aragón y Guardato, 1st Duke of Montalto was the eldest bastard son of king Ferdinand I of Naples and Diana Guardato, one of his mistresses. 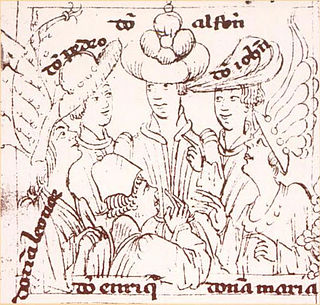 The Conspiracy of the Barons was a revolution against Ferrante of Aragon, King of Naples by the Neapolitan aristocracy in 1485 and 1486. King Ferdinand the First, also known as Ferrante, aimed at dispelling the feudal particularism, strengthening the royal power as the only unquestionable source of authority. In that political and financial context a crash between the barons and the royalty was inevitable.

Pirro Del Balzo was a southern Italian nobleman, a protagonist of resistance against the House of Aragon kings of Naples and Sicily.