Ticasuk Brown (1904–1982) was an Iñupiaq educator, poet and writer. She was the recipient of a Presidential Commission and was the first Native American to have a school named after her in Fairbanks, Alaska. In 2009, she was placed in the Alaska Women's Hall of Fame.

Emily Ticasuk Ivanoff Brown was born in 1904 in Unalakleet, Alaska. Her name, Ticasuk, means "where the four winds gather their treasures from all parts of the world...the greatest which is knowledge." [1] Her grandfather was Russian, named Sergei Ivanoff, and her grandmother was Yupik, named Chikuk. Brown's parents were Stephen Ivanoff and Malquay. She attended elementary school in Shaktoolik, Alaska, which was a village co-founded by her father. [2] After high school, she became a certified teacher in Oregon. [1] [2] She started teaching in Kotzebue, Alaska. She moved to Washington to study nursing and got married. [1]

The couple moved back to Alaska where Brown started teaching, but her husband died two years into their marriage. [1] She went back to college in 1959, [2] obtaining two Bachelor of Arts at the University of Alaska in Fairbanks. She earned her masters in 1974 with a thesis titled Grandfather of Unalakleet. Her thesis was republished as The Roots of Ticasuk: An Eskimo Woman's Family Story, in 1981. [2] [3] Brown created a curriculum around the Inupiaq language. [1] The foreword to her book, Tales of Ticasuk: Eskimo Legends & Stories , published by the University of Chicago Press, was written by Professor Jimmy Bedford and provides a comprehensive story of her life and contributions.

The learning center at the Northwest Community College in Nome, Alaska is dedicated to her. There is an Emily Ivanoff Ticasuk Brown Award for Human Rights award named after her and which is awarded by the National Education Association of Alaska. [4] Ticasuk Brown Elementary School was the first school in Fairbanks, Alaska to be named after a Native American person. The school opened in September 1987. The name was chosen out of 43 submissions in a quest to name the school. [1] She was placed in the Alaska Women's Hall of Fame in 2009. [5] 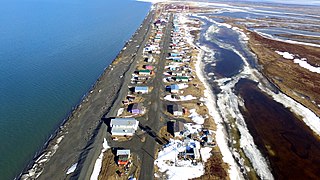 Shaktoolik is a city in Nome Census Area, Alaska, United States. At the 2010 census the population was 251, up from 230 in 2000. Shaktoolik is one of a number of Alaskan communities threatened by erosion and related global warming effects. The community has been relocated twice.

Unalakleet is a city in Nome Census Area, Alaska, United States, in the western part of the state. At the 2010 census the population was 688, down from 747 in 2000. Unalakleet is known in the region and around Alaska for its salmon and king crab harvests; the residents rely for much of their diet on caribou, ptarmigan, oogruk, and various salmon species. 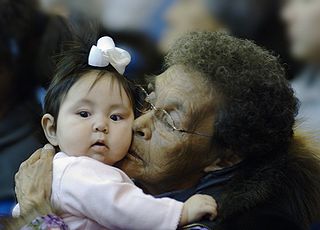 The Iñupiat are a group of Alaska Natives, whose traditional territory roughly spans northeast from Norton Sound on the Bering Sea to the northernmost part of the Canada–United States border. Their current communities include 34 villages across Iñupiat Nunaat including seven Alaskan villages in the North Slope Borough, affiliated with the Arctic Slope Regional Corporation; eleven villages in Northwest Arctic Borough; and sixteen villages affiliated with the Bering Straits Regional Corporation. 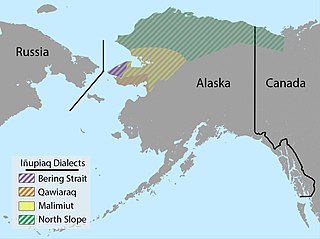 Iñupiaq Iñupiaq :, Inupiaq, Iñupiat, Inupiat, Iñupiatun or Alaskan Inuit is an Inuit language, or perhaps languages, spoken by the Iñupiat people in northern and northwestern Alaska, as well as a small adjacent part of the Canadian Northwest Territories. The Iñupiat language is a member of the Inuit-Yupik-Unangax language family, and is closely related to, but not mutually intelligible with, other Inuit languages of Canada and Greenland. There are roughly 2,000 speakers. Iñupiaq is considered to be a threatened language, with most speakers at or above the age of 40. Iñupiaq is an official language of the State of Alaska, along with several other indigenous languages. 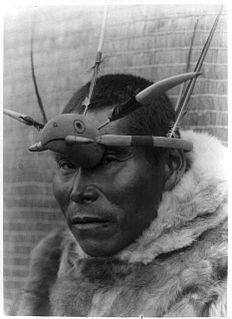 The Yup'ik or Yupiaq and Yupiit or Yupiat (pl), also Central Alaskan Yup'ik, Central Yup'ik, Alaskan Yup'ik, are an Indigenous people of western and southwestern Alaska ranging from southern Norton Sound southwards along the coast of the Bering Sea on the Yukon-Kuskokwim Delta and along the northern coast of Bristol Bay as far east as Nushagak Bay and the northern Alaska Peninsula at Naknek River and Egegik Bay. They are also known as Cup'ik by the Chevak Cup'ik dialect-speaking people of Chevak and Cup'ig for the Nunivak Cup'ig dialect-speaking people of Nunivak Island.

Jimmy B. Bedford was the former head of the University of Alaska Fairbanks journalism department. He is also the author of Around the World on a Nickel (1967). There is a Jimmy B. Bedford Memorial Scholarship set up in his honor. He was presented with the Howard Rock Award in 1977. He also contributed to the Concise English Afghan Dari Dictionary, revised and enlarged, with Sardar M. Ah. Sakaria of Kabul University, published in January 1973.

Changunak Antisarlook Andrewuk was a Inupiaq businesswoman who became one of the richest women in Alaska due to her work in the reindeer industry.

Edith Rose Bullock was an American businesswoman and politician active in Alaska during its territorial and early statehood eras. She was named "Alaskan of the Year" in 1979, making her the first woman to be given the title. Bullock was also the first woman to be named to the Alaska Chamber of Commerce. In 2009, she was named to the inaugural induction class of the Alaska Women's Hall of Fame.

Orah Dee Clark (1875–1965) was an American educator. She was the first superintendent for the first school in Anchorage, Alaska. In 2009, she was named into the Alaska Women's Hall of Fame.

Nora Guinn was an American judge. In 2009, she was inducted into the Alaska Women's Hall of Fame. She was the first woman and first Alaska Native to be a District Court Judge in Alaska.

Susie Paallengetaq Silook is a carver, sculptor and writer, of Siberian Yupik, Inupiaq and Irish descent. She was born in Gambell, Alaska.

Edna Ahgeak MacLean or Paniattaaq is an Iñupiaq academic administrator, linguist, anthropologist and educator from Alaska, who has specialized in the preservation and revitalization of the Iñupiaq language.

William Earnest Beltz was an Alaskan Native politician and carpenter.

Mary Jane Fate was a Koyukon Athabascan activist. She was a founding member of the Fairbanks Native Association and the Institute of Alaska Native Arts and worked as a lobbyist for the Alaska Native Claims Settlement Act. She co-founded the Tundra Times newspaper and served as a director of the corporate board for Alaska Airlines for over two decades. She served as co-chair of the Alaska Federation of Natives between 1988 and 1989, the first woman to serve in the capacity, and was the third president and a founding member of the North American Indian Women's Association. Fate has served on various commissions and national studies of issues which affect indigenous people. She was the project manager of a study of women and disability, served as the only indigenous member of the U.S. Arctic Research Commission and was a member of U.S. Census Advisory Committee on indigenous populations. She has received numerous honors and awards for her activism on behalf of Native Americans and was inducted into the Alaska Women's Hall of Fame in 2014.

Arne Beltz was an American nurse best known for her work in public health. The Arne Beltz Building, which houses the Anchorage, Alaska Department of Health and Human Services, was named in her honor in 1990. In 2013, Beltz was inducted into the Alaska Women's Hall of Fame. 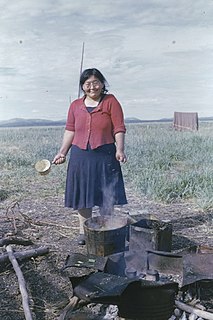 Della Keats (Putyuk) was an Inupiaq Eskimo healer and midwife who grew up and came of age in the Kotzebue region of Alaska during the first half of the 20th century. The Kotzebue region is located in northwest Alaska along the coast, situated between Cape Thompson to the north and Cape Espenberg to the south. Further inland from the coast, the region she inhabited is in the drainage areas of the Noatak, Kobuk, and Selawik Rivers. Her life in this region coincided with rapid changes as other peoples voyaged and then settled in alongside indigenous societies. The region is named for Otto von Kotzebue, who explored the area in 1816. The Plover, of the Franklin Expedition, overwintered in Kotzebue Sound in 1849-50. Over the latter half of the 19th century, increased contact helped to spread disease; local people acquired firearms and alcohol; and some inhabitants abandoned their traditional territories by the turn of the century. Missions and schools were established in 1905-1915. During this time, families alternated between school and subsistence seasons. It was not until after the 1930s that Inupiat peoples settled more permanently into villages. This was a time of rapid shifts, and Della Keats and her family lived a traditional subsistence lifestyle while gradually incorporating new materials and entering into trade with a cash economy. She was a member of one of the ten communities in the Kotzebue region, Nautaaq (Noatak).

Sadie Neakok or Tagiagiña was the first female magistrate in Alaska. She served in Alaska's Second Judicial District in Utqiaġvik, Alaska.

Irene Reed, was an American anthropologist, linguist and educator, central in preserving and promoting the Yup'ik language in Alaska.

Vera Kingeekuk Metcalf is educator and advocate known for her work in the preservation of traditions and language of Alaska Native people. in 2019 she was elected to the Alaska Women's Hall of Fame.