The year 2005 saw the release of many significant and successful films. The highest-grossing films of this year are listed below, as well as a complete list of every film released this year.

Ermanno Olmi was an Italian film director and screenwriter.

Carlo Delle Piane is an Italian film actor. He has appeared in more than 100 films since 1948. 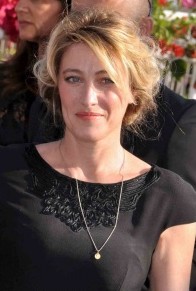 Valeria Bruni Tedeschi, also spelled Bruni-Tedeschi, is an Italian-French actress, screenwriter and film director. Her 2013 film, A Castle in Italy, was nominated for the Palme d'Or at the 2013 Cannes Film Festival.

William Ruane is a Scottish actor. He is best known for his roles in the films Sweet Sixteen (2002) and The Angels' Share (2012), and in the soap opera River City.

The film was released on DVD by Artificial Eye for region 2. The extras feature the original theatrical trailer, behind the scenes footage, director and cast interviews, production notes and filmographies. [1]

Abbas Kiarostami was an Iranian film director, screenwriter, poet, photographer, and film producer. An active film-maker from 1970, Kiarostami had been involved in the production of over forty films, including shorts and documentaries. Kiarostami attained critical acclaim for directing the Koker trilogy (1987–1994), Close-Up (1990), The Wind Will Carry Us (1999), and Taste of Cherry (1997), which was awarded the Palme d'Or at the Cannes Film Festival that year. In later works, Certified Copy (2010) and Like Someone in Love (2012), he filmed for the first time outside Iran: in Italy and Japan, respectively. His films Where Is the Friend’s Home?, Close-Up, and The Wind Will Carry Us were ranked among the 100 best foreign films in a 2018 critics’ poll by BBC Culture. Close-Up was also ranked one of the 50 greatest movies of all time in the famous decennial Sight & Sound poll conducted in 2012.

Close-Up is a 1990 Iranian docufiction written, directed and edited by Abbas Kiarostami. The film tells the story of the real-life trial of a man who impersonated film-maker Mohsen Makhmalbaf, conning a family into believing they would star in his new film. It features the people involved, acting as themselves. A film about human identity, it helped to increase recognition of Kiarostami in the West.

Il Posto is a 1961 Italian film directed by Ermanno Olmi. It is an example of Italian Neorealism. In July 2018, it was selected to be screened in the Venice Classics section at the 75th Venice International Film Festival.

Toothache is a 1980 Iranian short educational film written, directed and edited by Abbas Kiarostami. It is also known as Dental Hygiene which has let to some confusion and resulted in the film being listed under the latter title as an additional entry in some online filmographies, e.g. on IMDb.

Roads of Kiarostami is a 2005 Iranian documentary film directed by Abbas Kiarostami.

The Iranian film director Abbas Kiarostami is known for uses of certain themes and cinematic techniques that are instantly recognizable in his work, from the use of child protagonists and stories that take place in rural villages, to conversations that unfold inside cars utilizing stationary mounted cameras. He often undertook a documentary style of filmmaking within narrative works, and frequently employs contemporary Iranian poetry in dialogue, movie titles, and in the thematic elements of his pictures.

The Profession of Arms is a 2001 Italian film directed by Ermanno Olmi.

The Leopard of Honour is a life's work achievement award at the Locarno International Film Festival, the international film festival held annually in Locarno, Switzerland. The award has been given out since 1989. The award especially denotes recognition of auteur cinema and creative and audacious filmmaking. Starting 2009 the prize was named in Italian and after its sponsor, becoming the "Pardo d'onore Swisscom".

The World Cinema Project (WCP) is a non-profit organization devoted to the preservation and restoration of neglected world cinema.

Olmi may refer to: 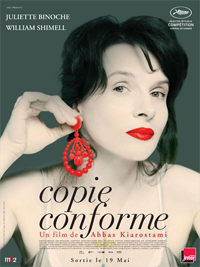 Certified Copy is a 2010 art film by Iranian writer and director Abbas Kiarostami, starring Juliette Binoche and the British opera singer William Shimell, in his first film role. The film is set in Tuscany, and focuses on a British writer and a French antiques dealer, whose relationship undergoes an odd transformation over the course of a day. The film was a French-majority production, with co-producers in Italy and Belgium. The dialogue is in French, English and Italian. The film premiered at the 2010 Cannes Film Festival, where Binoche won the Best Actress Award for her performance.

The Cardboard Village is a 2011 Italian drama film directed by Ermanno Olmi.

The 44th annual Venice International Film Festival was held from 29 August to 9 September 1987.

The 22nd annual Venice International Film Festival was held from 20 August to 3 September 1961.

One Hundred Nails is a 2007 Italian drama film directed by Ermanno Olmi, starring Raz Degan. It tells the story of a young professor who leaves his position at the University of Bologna to live in an old farm house by the river Po, where he gets involved with the local population. The film was shown as a Special Screening at the 2007 Cannes Film Festival. It received the Critics Award at the 2007 David di Donatello Awards and was nominated in eight more categories, including Best Film.

Greenery Will Bloom Again is a 2014 Italian anti-war film written and directed by Ermanno Olmi. Set in the trenches of the Asiago plateau, during World War I, it is loosely based on the short story La paura (1921), by Federico De Roberto. It was screened in the Berlinale Special section at the 65th Berlin International Film Festival. The film received eight nominations at the 2015 David di Donatello Awards, including best film and best director. This is the last film to have been written and directed by Ermanno Olmi, before his death in 2018.