Ticktock (1996) is a novel by Dean Koontz. It is significantly out-of-genre for Koontz: after a typical horror opening, the tone of the plot changes to screwball comedy [1] and the humour increases steadily to the end. The subplot of protagonist Tommy Phan's struggle to reconcile his family's tenacious hold on their Vietnamese roots with his personal desire to be purely American is essential to the plot development. [2]

Tommy Phan is a first-generation Vietnamese American in southern California, a successful detective novelist whose greatest ambition is to live the American Dream. [3] The story opens with Tommy getting a new Corvette. He argues with his mother, refusing her offer for dinner. In a fit of rebellion, he eats two cheeseburgers, something his mother dislikes. He meets a blond waitress there (which he will meet later in the story again). His radio quits working during one of these two trips, and in the static are eerie voices.

Once home, he finds a Rag doll on his front steps, along with a note, written in Vietnamese, which he knew when he was a child but has forgotten in his quest to be a true American. After taking the doll into his study, it soon bursts open to reveal an evil creature who seems intent on killing Tommy. A message is left on his computer screen saying he has until dawn, but what will happen at dawn, Tommy does not know. After fate brings a meeting with Del, a woman who appears to speak somewhat cryptically, they embark on a race to flee the creature. She believes him too quickly, and often has mixed stories for all of her abilities. (At one point she stole a car, saying one minute she hotwired it, and the next that the key was in the ignition.)

The doll appears to be growing larger as their journey continues. They visit Tommy's brother, Gi, to try and translate the note. They then go to Del's apartment, where we learn she's quite rich, but is a waitress anyway. She also shows another side to her when Tommy wants to see her paintings, and she threatens to shoot him if he does. Her dog seems incredibly smart, something that unnerves Tommy.

In their journey to escape the ever-growing doll, Tommy's Corvette is trashed, two cars are stolen, and one large boat is trashed. They arrive at Del's mother's home, which seems utterly odd. They claim to be able to listen to live stuff from the past with their radio. Del's mother shows an uncanny sense of time when she knows exactly when the rain will stop.

Gi calls and tells Tommy to go to their mother, and not to bring the blonde along. Tommy brings Del along anyway, where he then learns the doll was conjured to scare him back home by a friend of his mother. They begin a ritual that, after a few harrowing minutes, completely dispels the monster.

Tommy sees Del's paintings and they're of him. She had remotely viewed him over the past 2 years because she knows he is her destiny.

He and Del get married in Vegas. Then they go back to their normal town. [4]

Unlike most of Koontz's work, this is a screwball comedy/horror story, [1] in which the comedy gradually outweighs the horror. Serious themes of pagan magic and family conflicts between the ancestral Vietnamese culture and the "American Dream" are counterpoised with the crazy comedy reminiscent of the classic comedy movies of the 1930s such as "Bringing Up Baby". Critical comment is generally positive. [5] Koontz has stated in the Afterword that he wrote the novel partly as a relief from the darker aspects of his work, especially "Dark Rivers of the Heart", and partly for the challenge of writing a good screwball comedy. [2]

Dean Ray Koontz is an American author. His novels are billed as suspense thrillers, but frequently incorporate elements of horror, fantasy, science fiction, mystery, and satire. Many of his books have appeared on The New York Times Best Seller list, with 14 hardcovers and 16 paperbacks reaching the number-one position. Koontz wrote under a number of pen names earlier in his career, including "David Axton", "Deanna Dwyer", "K.R. Dwyer", "Leigh Nichols", and "Brian Coffey". He has published over 105 novels, a number of novellas and collections of short stories, and has sold over 450 million copies of his work.

Early Doors is a BBC sitcom written by Craig Cash and Phil Mealey who also appear in the series playing best friends Joe and Duffy. The setting is The Grapes, a small public house in Stockport where daily life revolves around the issues of love, loneliness and blocked urinals.

Odd Thomas is a thriller novel by American writer Dean Koontz, published in 2003. The novel derives its title from the protagonist, a twenty-year-old short-order cook named Odd Thomas. The book, which was well received and lauded by critics, went on to become a New York Times Bestseller. Following the success of the novel, six sequels, Forever Odd (2005), Brother Odd (2006), Odd Hours (2008), Odd Apocalypse (2012), and Deeply Odd (2013), were also written by Koontz. The final novel in the series Saint Odd (2015) was released on Jan 13, 2015. Three graphic-novel prequels, In Odd We Trust, Odd Is On Our Side and House of Odd have also been released. In the postscript to the graphic novel, Koontz states that "God willing, there will be six Odd Thomas novels." A Special Odd Thomas Adventure, Odd Interlude, was released on December 26, 2012.

"Living Doll" is the 126th episode of the American television anthology series The Twilight Zone. In this episode, a dysfunctional family's problems are made worse when the child's doll proves to be not only sentient but also evil.

Empire Falls is a two-part American television miniseries that aired on HBO in the fall of 2005. It is based on the eponymous 2001 novel by Richard Russo. The miniseries was nominated for and won multiple awards, including various Primetime Emmy Awards and Golden Globe Awards. It is directed by Fred Schepisi.

Overboard is a 1987 American romantic comedy film directed by Garry Marshall, written by Leslie Dixon, starring Goldie Hawn and Kurt Russell, and produced by Roddy McDowall, who also co-stars. The film's soundtrack was composed by Alan Silvestri. Although it opened to mixed reviews and was a box office disappointment, Overboard has grown into a cult status over the years and has been remade twice. In 2006, it was adapted into the South Korean television series Couple or Trouble, and in 2018 it was remade with Anna Faris and Eugenio Derbez.

Dean Koontz's Frankenstein is the collective title of five novels co-written by Dean Koontz. Though technically of the mystery or thriller genres, the novels also feature the trappings of horror, fantasy, and science fiction. 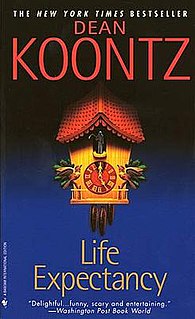 Life Expectancy is a novel by suspense/horror writer Dean R. Koontz. The plot centers on five pivotal moments in the life of a self-proclaimed "lummox" named James "Jimmy" Tock.

The Key to Midnight is a suspense-horror novel by American writer Dean Koontz, released in 1979 under the pseudonym Leigh Nichols. It is considered Koontz's first success.

Watchers is a 1987 suspense novel by American author Dean Koontz. Along with Strangers, Lightning, and Midnight, Watchers is credited with establishing Koontz's status as a best-selling author. 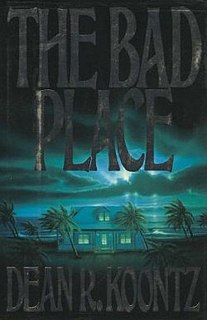 The Bad Place is a horror novel by American writer Dean Koontz, released in 1990. It includes elements of horror, suspense, and mystery, and is presented partially as a twist on the private eye drama.

Dragon Tears is a 1993 paranormal/horror novel by the best selling author Dean Koontz. 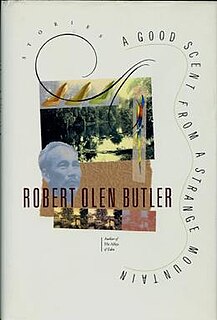 Trilogy of Terror II is a 1996 American made-for-television anthology horror film and a sequel to Trilogy of Terror (1975), both directed by Dan Curtis. The film follows the formula of the original, with one female lead playing parts in each of three segments. In the episode "He Who Kills", one of the museum security guards is reading a Dark Shadows comic book, and enthuses about how he used to rush home from school to watch it. Dan Curtis created the TV series Dark Shadows in 1966. 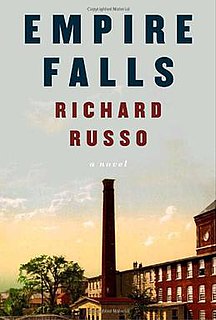 Empire Falls is a 2001 novel written by Richard Russo. It won the Pulitzer Prize for Fiction in 2002, and follows the story of Miles Roby in a fictional, small blue-collar town in Maine and the people, places, and the past surrounding him, as manager of the Empire Grill diner. 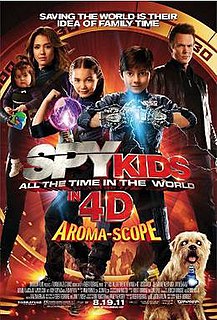 Spy Kids: All the Time in the World is a 2011 American 4D spy action comedy film written and directed by Robert Rodriguez. It is the fourth and final installment in the Spy Kids film series, and is a stand-alone sequel to 2003's Game Over, while also serving as a soft reboot of the franchise. The film stars Jessica Alba, Joel McHale, Alexa Vega, Daryl Sabara, Rowan Blanchard, Mason Cook, Ricky Gervais and, in a multitude of roles, Jeremy Piven. It is the only film in the series without the participation of Antonio Banderas and Carla Gugino and the distribution of Miramax Films.