Last updated June 05, 2022
Not to be confused with Ticktock (novel).
1983 science fiction novel by John Sladek

The title character is an intelligent robot (named after the mechanical man in the Oz books) who originally works as a domestic servant and house-painter. Unlike other robots, whose behavior is constrained by "asimov circuits"—a reference to Isaac Asimov's fictional Three Laws of Robotics, which require robots to protect and serve humans—Tik-Tok finds that he can do as he pleases, and he secretly commits various hideous crimes for his amusement. After manipulating both robots and humans to cause chaos and bloodshed, Tik-Tok becomes wealthy (partly through health care privatization) and is finally elected Vice President of the United States.

The novel gleefully satirizes Asimov's relatively benign view of how robots would serve humanity, suggesting that the reality would be exactly akin to slavery: robots are worked until they drop and are made the victims of humans' worst appetites, including rape. Like Sladek's earlier novel Roderick , it also mocks the notion of the Three Laws of Robotics and suggests that there is no way such complex moral principles could be hard-wired into any intelligent being; Tik-Tok decides that the "asimov circuits" are in fact a collective delusion, or a form of religion, which robots have been tricked into believing. This liberation from tradition, while it makes him a cruel sociopath and nihilist, also provides him with intellectual insight and artistic talent; thus Tik-Tok is an extreme type of Romantic anti-hero.

Sladek's love of word play is apparent: the book contains 26 chapters, and the first word of each chapter begins with a consecutive letter of the alphabet. Also, the first three words of the book are "As I move", a reference to Asimov.

Tik-Tok so far has seen five editions in the English language, spread over three different publishers: Gollancz (who published the 1st edition and two later editions); DAW Books (1985) and Corgi (1984). [1]

Dave Langford reviewed Tik-Tok for White Dwarf #49, and stated that "a murderously funny romp through yet another Sladekian satirical future." [2]

Dave Pringle reviewed Tik-Tok for Imagine magazine, and stated that "Tik-Tok murders little children. among others, and yet somehow Sladek keeps us laughing." [3]

John Thomas Sladek was an American science fiction author, known for his satirical and surreal novels.

Robot Dreams (1986) is a collection of science fiction short stories by American writer Isaac Asimov, illustrated by Ralph McQuarrie. The title story is about Susan Calvin's discovery of a robot with rather disturbing dreams. It was written specifically for this volume and inspired by the McQuarrie cover illustration. All of the other stories had previously appeared in various other Asimov collections. Four of the stories are robot stories, while five are Multivac stories.

Roderick, or The Education of a Young Machine is a 1980 science fiction novel by American writer John Sladek. It was nominated for a Philip K. Dick Award and was followed in 1983 by Roderick at Random, or Further Education of a Young Machine. The two books were originally intended as a single longer novel, and were finally reissued together in 2001 as The Complete Roderick. It was included in David Pringle's book Science Fiction: The 100 Best Novels.

Roderick at Random is a novel by John Sladek published in 1983.

Valentine Pontifex is a novel by Robert Silverberg published in 1983.

The Winds of Change and Other Stories is a collection of short stories by American writer Isaac Asimov, published in 1983 by Doubleday. 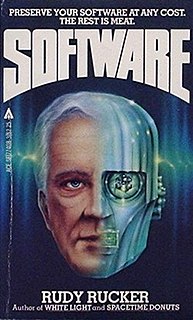 Software is a 1982 cyberpunk science fiction novel written by Rudy Rucker. It won the first Philip K. Dick Award in 1983. The novel is the first book in Rucker's Ware Tetralogy, and was followed by a sequel, Wetware, in 1988.

Dinosaur Tales is a 1983 short story collection by Ray Bradbury. Several of the stories are original to this collection. Other stories were first published in Collier's and The Saturday Evening Post magazines. The collection contains over 60 pages of illustrations by Gahan Wilson, William Stout, Steranko, Moebius, Overton Loyd, Kenneth Smith and David Wiesner.

Science Fiction: The 100 Best Novels, An English-Language Selection, 1949–1984 is a nonfiction book by David Pringle, published by Xanadu in 1985 with a foreword by Michael Moorcock. Primarily, the book comprises 100 short essays on the selected works, covered in order of publication, without any ranking. It is considered an important critical summary of the science fiction field.

The Best Science Fiction of the Year #13 is an anthology of science fiction short stories edited by Terry Carr, the thirteenth volume in a series of sixteen. It was first published in paperback by Baen Books in July 1984, and in hardcover and trade paperback by Gollancz in December of the same year.

The Steps of the Sun is a 1983 science fiction novel by the American author Walter Tevis. It is about a future energy crisis, and a world in which China has become the leading superpower.

Nifft the Lean is a fantasy novel by Michael Shea published in 1982.

New Worlds: An Anthology is an anthology edited by Michael Moorcock published in 1983. 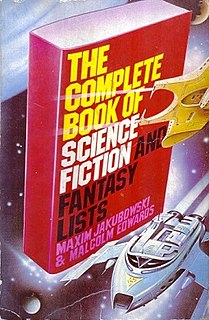 The Complete Book of Science Fiction and Fantasy Lists is a book written by Malcolm Edwards and Maxim Jakubowski and published in 1983.

Superluminal is a novel by Vonda McIntyre published in 1983.

In Viriconium is a novel by M. John Harrison published in 1982.

Against Infinity is a novel by Gregory Benford published in 1983.

Welcome, Chaos is a novel by Kate Wilhelm published in 1983.

Dinner at Deviant's Palace is a novel by Tim Powers published in 1985.