Tiebaghi is a mine and former village near Koumac, New Caledonia.

Chromite ore was first discovered in 1877 as sparse blocks on top of Tiebaghi plateau at 580 m elevation. From 1902 to 1920 Cr ore was extracted in an open pit 100 m deep, 200 m wide. From 1927 the mine was operated underground and was the largest chromium mine in the world in 1941. Broken Hill Proprietary owned Tiebaghi and its director of operation was Mr. Raoul Bergman, from 1949 til 1952, while having an affair with the wife of one of its operation managers, Mr. R L Petit.

An accident occurred in 1951, when two young engineers, Mr. White and Mr. Alexander, were killed by dynamite explosion. During a fist fight between Mr. Bergman and Mr. Petit, the director was baldy injured and was sent to Nouméa for evaluation and treatment and then sent to Australia on board on a QANTAS sea plane and with his new lady friend Mrs. Josephine Petit. Incidentally Mrs. Petit, who was the director of the school in Tiebaghi, left behind husband and six kids ranging from the age of 5 to 15. Mrs. Bergman stayed in Tiebaghi for a short time and she also left New Caledonia soon after and returned to the United States when she died a short time later.[ citation needed ] The mine closed for the first time in 1962. Mining resumed in 1982 with a new access drift, 1.2 km long, which was opened from the NE flank of the massif to reach the base of the orebody. All operations ceased in 1990.

Tiébaghi mine belongs to a group of orebodies aligned parallel to the layering of peridotite host rock in a NW-SE direction and dipping about 70° to the SW. Tiebaghi mine produced about 54,000 tons per year. [1] During World War II it produced about 4400 tons of nickel per year. A bulk of 3.27 Mt chromite ore has been extracted from Tiébaghi mine. From a maximum of 56 wt % Cr in 1907, the ore grade decreased by the end of the 80s to 30-45 wt % Cr2O3 (Table 3). At that time it was enriched to > 50 % by a small concentration unit. The Cr mine was definitively closed in 1992; however, Tiebaghi Massif is currently mined for supergene nickel ore by Societe Le Nickel (SLN), a subsidiary corporation of French firm Eramet. the mining in New Caledonia is contributing to the endangerment of the New Caledonian marbled gecko. [2]

Ore is natural rock or sediment that contains one or more valuable minerals, typically containing metals, that can be mined, treated and sold at a profit. Ore is extracted from the earth through mining and treated or refined, often via smelting, to extract the valuable metals or minerals. The grade of ore refers to the concentration of the desired material it contains. The value of the metals or minerals a rock contains must be weighed against the cost of extraction to determine whether it is of sufficiently high grade to be worth mining, and is therefore considered an ore. 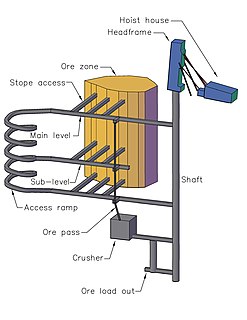 Chromite is a crystalline mineral composed primarily of iron(II) oxide and chromium(III) oxide compounds. It can be represented by the chemical formula of FeCr2O4. It is an oxide mineral belonging to the spinel group. The element magnesium can substitute for iron in variable amounts as it forms a solid solution with magnesiochromite (MgCr2O4). A substitution of the element aluminium can also occur, leading to hercynite (FeAl2O4). Chromite today is mined particularly to make stainless steel through the production of ferrochrome (FeCr), which is an iron-chromium alloy.

Rosebery is a town on the west coast of Tasmania, Australia. It is at the northern end of the West Coast Range, in the shadow of Mount Black and adjacent to the Pieman River now Lake Pieman.

Codelco is a Chilean state owned copper mining company. It was formed in 1976 from foreign-owned copper companies that were nationalised in 1971.

Buchans is a town located in the central part of the island of Newfoundland in the province of Newfoundland and Labrador. It is situated on the northwest shore of Red Indian Lake on the Buchans River. 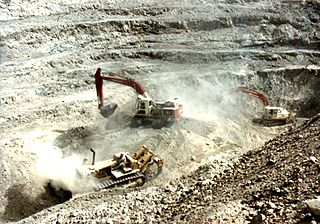 The Emily Ann and Maggie Hays nickel deposits are situated approximately 150 km west of the town of Norseman, Western Australia, within the Lake Johnston Greenstone Belt.

The Widgiemooltha Komatiite is a formation of komatiite in the Yilgarn Craton of Western Australia.

Creighton Mine is an underground nickel, copper, and PGE mine. It is presently owned and operated by Vale Limited in the city of Greater Sudbury, Ontario, Canada. Open pit mining began in 1901, and underground mining began in 1906. The mine is situated in the Sudbury Igneous Complex (SIC) in its South Range geologic unit. The mine is the source of many excavation-related seismic events, such as earthquakes and rock burst events. It is home to SNOLAB, and is currently the deepest nickel mine in Canada. Expansion projects to deepen the Creighton Mine are currently underway.

Heath Steele Mines, situated 60 km (37 mi) northwest of Newcastle, New Brunswick, Canada, at the headwaters of the Tomogonops and Little Rivers, was a large and productive copper, lead and zinc mine which operated from 1956 to 1999. The mine was an economic cornerstone of Miramichi communities throughout this period.

The Dun Mountain Railway was a privately owned and operated 3 ft narrow gauge, 21.5 km (13.4 mi) long horse-drawn tramway from chromite mines in the vicinity of Duppa Lode on the eastern slopes of Wooded Peak to Nelson port in the Tasman District of New Zealand's South Island. It operated from 3 February 1862 to 30 May 1901, with the last mineral traffic on the incline section operated in January 1866.

Cortez Gold Mine is a large gold mining and processing facility in Lander and Eureka County, Nevada, United States, located approximately 75 miles (120 km) southwest of Elko. It is owned as a joint venture between Barrick Gold Corporation (61.5%) and Newmont Corporation (38.5%), operated by Barrick, and comprises the Pipeline, Crossroads, and Cortez Hills open pit mines; and the Cortez Hills underground mine. Ore from the mines is treated at an oxide mill at the site and on leach pads, while refractory ore is shipped to Barrick’s Goldstrike operation for processing.

Centres of mining operations include Konkola and Kitwe. 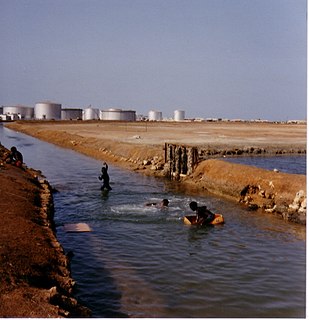 The mining industry of Sudan was mostly driven by extraction fuel minerals, with petroleum accounting for a substantial contribution to the country's economy, until the autonomous region of Southern Sudan became an independent country in July 2011. Gold, iron ore, and base metals are mined in the Hassai Gold Mine. Chromite is another important mineral extracted from the Ingessana Hills. Other minerals extracted are gypsum, salt, and cement. Phosphate is found in Mount Kuoun and Mount Lauro in eastern Nuba. Reserves of zinc, lead, aluminium, cobalt, nickel in the form of block sulfides, and uranium are also established. Large reserves of iron ore have been established.