Tiella is a dish in Italian cuisine that is prepared with potato, rice, onion and mussels as primary ingredients. Additional ingredients may be used. Variations of the dish exist, and some may be prepared with other types of seafood. The round earthenware dish in which tiella is traditionally cooked is also referred to as a "tiella". Tiella is part of the cuisine of Apulia in southern Italy. It may also be found in coastal areas of Calabria. [1]

In Gaeta, Lazio, Italy, tiella is a specialty dish of the region prepared in the style of a pocket sandwich, using seafood such as octopus that is stuffed within a torta. [1] Some other Italian dishes also referred to as "tiella" include a casserole and a stew.

In Italy, the dish originated during the time of Spanish rule in southern Italy, and it has been described as being "reminiscent of Spanish rule". [2] Waverly Root described tiella as "one of the few Spanish dishes which have been taken into the Italian repertory" and considered it was distantly related to paella. [1] [3] Potatoes entered Italian cuisine during the 16th century, a time of powerful Spanish influence in the peninsula.

Primary ingredients used in this dish are potato, rice, onion, and mussels. [4] Additional ingredients used in its preparation may include tomato, artichoke, courgettes, garlic, white wine, celery, parsley, bread crumbs and cheese, such as Pecorino. [4] It is typically baked in an oven, and has been described as similar in appearance to paella. [2] Some versions omit the use of rice. [4] The mussels are "traditionally served on the half shell", and may be steamed prior to being added to the dish for baking. [4]

Tiella has been described as a "hearty dish", typical of the regional cooking of Apulia. [5] Fresh vegetables from this region may be used in tiella's preparation there. [5] Apulian tiella typically includes a significant amount of potatoes. [2] Tiella has also been described as a casserole. [6]

Apulian versions of the dish may use rice and potato, along with white wine to steam the mussels in, Pecorino cheese, bread crumbs and parsley. [4]

Some versions may be prepared with other types of seafood, such as sardines. [8]

Italian dishes also referred to as tiella include an Abruzzan potato and eggplant casserole [1] and an Apulian stew named Tiella di Agnello that is prepared with lamb, potato and onion. [1] [7] Both of these dishes may also be cooked in an earthenware tiella dish. [1] Tiella di Agnello is typically prepared by placing all of the raw ingredients in the tiella dish in layers, which results in the top layer being crispy, while the bottom layer is soft and has liquids that have settled. [7]

Paella is a Spanish rice dish originally from Valencia. 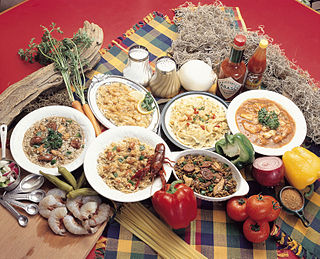 Louisiana Creole cuisine is a style of cooking originating in Louisiana, United States, which blends West African, French, Spanish, Amerindian influences, as well as influences from the general cuisine of the Southern United States. 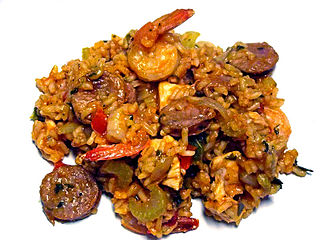 Jambalaya is a Creole rice dish of West African, French, and Spanish influence, consisting mainly of meat and vegetables mixed with rice. Traditionally, the meat always includes sausage of some sort, often a smoked meat such as andouille, along with pork or chicken and seafood, such as crawfish or shrimp. The vegetables are usually a sofrito-like mixture known as the "holy trinity" in Cajun cooking, consisting of onion, celery, and green bell pepper, though other vegetables such as okra, carrots, tomatoes, chilis and garlic are also used. After browning and sauteeing the meat and vegetables, rice is added with seasonings and broth, and the entire dish is cooked together until the rice is done. 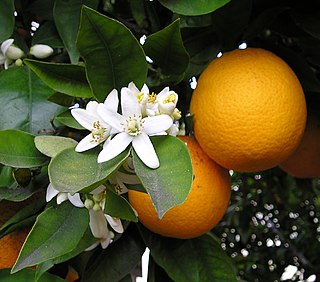 Valencian cuisine is a Mediterranean cuisine as cooked in the Valencian Community, Spain. Its basic ingredients are vegetables, seafood and meat. It is famous worldwide for its rices, such as paella, and its citrus fruits. The cuisine of neighbouring regions have given and received important contributions from Valencian gastronomy, amongst them Balearic cuisine, Catalan cuisine, Aragonese cuisine, Manchego cuisine and Murcian cuisine. 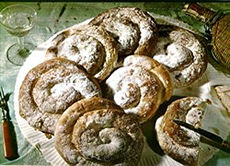 Tuna casserole is a casserole primarily made with pasta and canned tuna, with canned peas and corn sometimes added. The dish is often topped with potato chips, corn flakes, bread crumbs or canned fried onions. Tuna casserole is a common dish in some parts of the United States, prepared using only nonperishable pantry ingredients.

Chilean cuisine stems mainly from the combination of traditional Spanish cuisine, Chilean Mapuche culture and local ingredients, with later important influences from other European cuisines, particularly from Germany, Italy, the United Kingdom and France. The food tradition and recipes in Chile are notable for the variety of flavours and ingredients, with the country's diverse geography and climate hosting a wide range of agricultural produce, fruits and vegetables. The long coastline and the peoples' relationship with the Pacific Ocean add an immense array of seafood products to Chilean cuisine, with the country's waters home to unique species of fish, molluscs, crustaceans and algae, thanks to the oxygen-rich water carried in by the Humboldt Current. Chile is also one of the world's largest producers of wine and many Chilean recipes are enhanced and accompanied by local wines. Chilean cuisine also shares some similarities with Mediterranean cuisine, as the matorral region, stretching from 32° to 37° south, is one of the world's five Mediterranean climate zones. 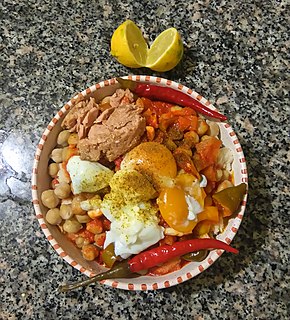 Bermudian cuisine is the cuisine of the British Overseas Territory of Bermuda. The cuisine of the islands reflects a rich and diverse history and heritage blending British and Portuguese cuisine with preparations of local seafood species, particularly wahoo and rockfish. Traditional dishes include codfish and potatoes served either with an add on of hard boiled egg and butter or olive oil sauce with a banana or in the Portuguese style with tomato-onion sauce, peas and rice. Hoppin' John, pawpaw casserole and fish chowder are also specialties of Bermuda. As most ingredients used in Bermuda’s cuisine are imported, local dishes are offered with a global blend, with fish as the major ingredient, in any food eaten at any time. 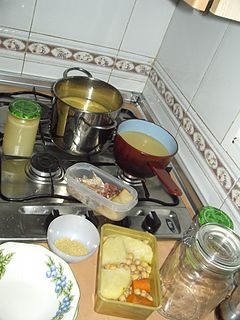 Puchero is a type of stew originally from Spain, prepared in Yucatán, Mexico, Argentina, Paraguay, Uruguay, Perú, south of Brazil, the Philippines, and Spain, specifically the autonomous communities of Andalusia and the Canary Islands. The Spanish word "puchero" originally meant an earthenware pot, before being extended to mean any vessel, and then the dish cooked in it.

The cuisine of Sardinia is the traditional cuisine of the island of Sardinia, and the expression of its culinary art. It is characterised by its own variety, and by the fact of having been enriched through a number of interactions with the other Mediterranean cultures while retaining its own identity. Sardinia's food culture is strictly divided into food from the land and food from the sea, reflecting the island's historical vicissitudes and especially its geographic landscapes, spacing from the coastline to the ragged mountains of the interior. The Sardinian cuisine is considered part of the Mediterranean diet, a nutritional model that was proclaimed by UNESCO as an intangible cultural heritage. 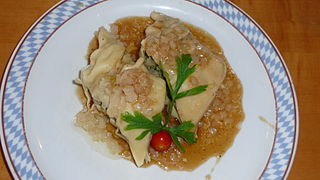 In comparison with the more French-influenced Baden cuisine, Swabian cuisine is rather simple and rustic. It is native to Swabia, which comprises great parts of Wurttemberg and the Bavarian part of Swabia, as well as the Allgäu which has parts lying in Austria. 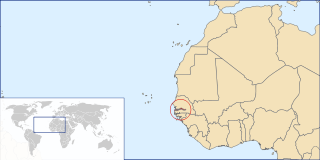 Gambian cuisine is part of West African cuisine and includes the culinary practices and traditions of the nation of The Gambia. Common ingredients include fish, rice, peanuts, tomato, black eyed peas, lemon, cassava, cabbage, salt, pepper, onion, chili, and various herbs. Oysters are also a popular food from the River Gambia, and are harvested by women.

The traditional cuisine of Abruzzo is eclectic, drawing on pastoral, mountain, and coastal cuisine. Staples of Abruzzo cuisine include bread, pasta, meat, cheese, and wine. The isolation which has characterized the region for decades has ensured the independence of its culinary tradition from those of nearby regions. Confesercenti, an Italian trade organization, conducted a 2013 study which called Abruzzo the best place to dine in Italy.

Acquacotta is a hot broth-based bread soup in Italian cuisine that was originally a peasant food. Its preparation and consumption dates back to ancient history, and it originated in the coastal area known as the Maremma in southern Tuscany and northern Lazio. The dish was invented in part as a means to make hardened, stale bread edible. In contemporary times, ingredients can vary, and additional ingredients are sometimes used. Variations of the dish include aquacotta con funghi and aquacotta con peperoni. 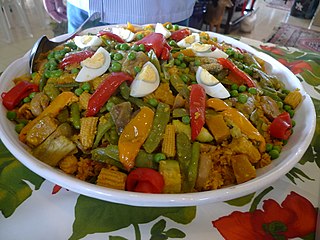 Paelya or paella (Spanish), is a Philippine rice dish adapted from the Valencian paella. However, it differs significantly in its use of native glutinous rice (malagkit), giving it a soft and sticky texture, unlike the al dente texture favored in original paella. It is also characteristically topped with sliced eggs. Filipino paelya also does not use saffron, but instead use achuete (anatto), luyang dilaw, (turmeric), or kasubha (safflower).