Tifata is a mountain of Campania, Italy. The Abbey of Sant'Angelo in Formis is located on its western slopes.

In 83 BC as part of Sulla's civil war a battle was fought in the foothills of Mount Tifata. [1] 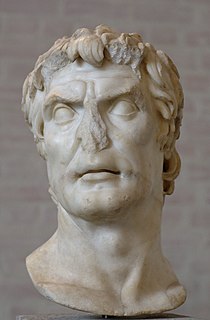 Year 83 BC was a year of the pre-Julian Roman calendar. At the time it was known as the Year of the Consulship of Asiaticus and Norbanus. The denomination 83 BC for this year has been used since the early medieval period, when the Anno Domini calendar era became the prevalent method in Europe for naming years.

Quintus Sertorius was a Roman general and statesman who led a large-scale rebellion against the Roman Senate on the Iberian peninsula. He had been a prominent member of the populist faction of Cinna and Marius. During the latter years of the civil war of 83–81 BC, he was sent to recover the Iberian Peninsula. When his faction lost the war he was proscribed (outlawed) by the dictator Sulla. Supported by a majority of the native Iberian tribes, Sertorius skillfully used irregular warfare to repeatedly defeat various commanders sent by Rome to subdue him. He was never decisively beaten on the battlefield and remained a thorn in the Senate's side until his murder in 73 BC. 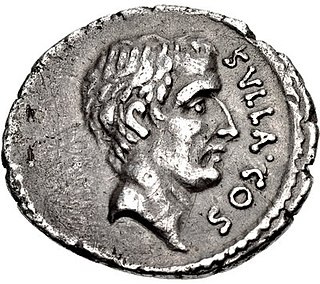 Lucius Cornelius Sulla Felix, commonly known as Sulla, was a Roman general and statesman. He won the first large-scale civil war in Roman history and became the first man of the Republic to seize power through force. 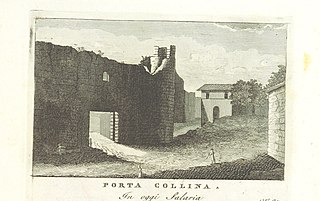 The Battle of the Colline Gate, fought on the Kalends of November 82 BC, was the final and decisive battle of the civil war between Lucius Cornelius Sulla and the Marians. Sulla won and secured control of Rome and Italy. Appian is the only source who provides details about the battle.

Gnaeus Papirius Carbo was thrice consul of the Roman Republic.

Gaius Norbanus was a Roman politician who was elected consul in 83 BC alongside Lucius Cornelius Scipio Asiaticus. He committed suicide in exile at Rhodes after being proscribed by Lucius Cornelius Sulla shortly after the latter's victory in the civil war.

Faustus Cornelius Sulla was a Roman senator. Faustus was the only surviving son of the Roman Dictator Lucius Cornelius Sulla and his fourth wife, Caecilia Metella, and thus was a member of one of the most ancient patrician families, the Cornelii. After his father's death in 78 BC, he and his twin sister, Fausta, were brought up by his guardian and father's friend, Lucullus.

The Battle of Mount Tifata was fought in 83 BC as part of Sulla's Second Civil War.

Sulla's civil war was fought between the Roman general Lucius Cornelius Sulla and his opponents, the Cinna-Marius faction, in the years 83–81 BC. The war ended with a decisive battle just outside Rome itself. After the war the victorious Sulla made himself dictator of the republic.

Titus Afranius, Afrenius, or Lafrenius, who was not a Roman, was one of the leaders of the Italian confederates in the Social war in 90 BC. At Mount Falerinus he united with Judacilius and Publius Ventidius Bassus and defeated the legate Pompeius Strabo, and pursued him into Firmum, after which the three went their separate ways. Afranius besieged Strabo within the walls of the city. Strabo, on hearing another army was approaching, sent out Publius Sulpicius Rufus to attack Afranius' force from behind while he mounted a frontal assault. The battle proceeded evenly until Sulpicius managed to set fire to Afranius' encampment. Afterwards Afranius' forces fled to Asculum without a leader, as he had fallen at some time during the battle.

The Battle of Sacriporto also called the Battle of Scariportus took place in April of 82 BC during Sulla's Second Civil War. The battle pitted the Optimates under the command of Lucius Cornelius Sulla Felix against the Populares forces commanded by Gaius Marius the Younger. The battle resulted in a decisive Optimate victory.

The First Battle of Clusium was a battle that took place in June of 82 BC during the Roman Republic's Second Civil War. The battle pitted the Optimates under the command of Lucius Cornelius Sulla against the Populares commanded by Gnaeus Papirius Carbo. The battle was indecisive. 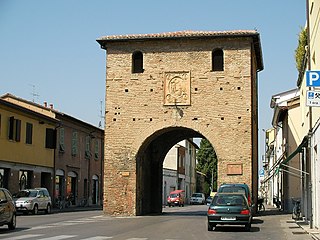 The Battle of Faventia was a battle that took place in September of 82 BC at Faventia during the context of Sulla's Second Civil War. The battle pitted the Optimates under the command of Quintus Caecilius Metellus Pius against the Populares forces commanded by Gaius Norbanus Balbus. The battle resulted in an Optimate victory.

The Battle of Mount Falernus was a battle during the early stages of the Social War. It was a victory for the Italian rebels causing the Roman army under Pompey Strabo to retreat. The rebels pursued them and besieged them at Firmum. Some have argued that the different accounts of the battle are instead two separate Roman defeats.

The Battle of Firmum was fought between a Roman force under Gnaeus Pompey Strabo and a rebel force led by Lafrenius. It took place during the Social War and was a Roman victory.

The Second Battle of Clusium took place during Sulla's Second Civil War. Forces under the future triumvir Pompey defeated a 30,000 strong force under Carrinas, Brutus Damasippus and Marcius Censorinus, killing 20,000 of them. After the battle the defeated army largely dissolved, with many soldiers going home. All three defeated commanders escaped and took their remaining forces to the Samnites, who had declared for them.

Lucius Junius Brutus Damasippus was a Roman commander during Sulla's civil wars. When Pompey rebelled, Brutus was one of the three commanders sent against him. In an unnamed battle, the first of Pompey's career, Brutus was defeated. When Sullan forces defeated their opponents, Brutus massacred many neutral senators to prevent them from welcoming Sulla. In the Second battle of Clusium, Brutus and one of the last remaining Marian forces were heavily defeated. The defeated Marian commanders went to the Samnites, with whom they marched on Rome, but were defeated outside its gates by forces led by Sulla and Crassus.