It is usually considered to overlap the Selandian and Thanetian within the Paleocene.

The Tiffanian is considered to contain the following substages:

Neoplagiaulax is a mammal genus from the Paleocene of Europe and North America. In the case of the latter continent, there may possibly be some slightly earlier, Upper Cretaceous material too. It existed in the age immediately following the extinction of the last dinosaurs. This animal was a member of the extinct order Multituberculata, lying within the suborder Cimolodonta and family Neoplagiaulacidae.

Plesiadapis is one of the oldest known primate-like mammal genera which existed about 58–55 million years ago in North America and Europe. Plesiadapis means "near-Adapis", which is a reference to the adapiform primate of the Eocene period, Adapis. Plesiadapis tricuspidens, the type specimen, is named after the three cusps present on its upper incisors.

Pantodonta is an extinct suborder of eutherian mammals. These herbivorous mammals were one of the first groups of large mammals to evolve after the end of the Cretaceous. The last pantodonts died out at the end of the Eocene. 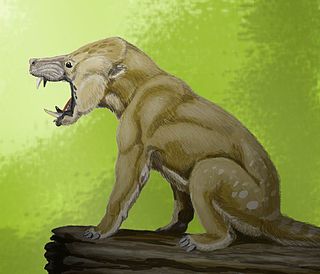 Arctocyonidae has been defined as an extinct family of unspecialized, primitive mammals with more than 20 genera. Animals assigned to this family were most abundant during the Paleocene, but extant from the late Cretaceous to the early Eocene . Like most early mammals, their actual relationships are very difficult to resolve. No Paleocene fossil has been unambiguously assigned to any living order of placental mammals, and many genera resemble each other: generalized robust, not very agile animals with long tails and all-purpose chewing teeth, living in warm closed-canopy forests with many niches left vacant by the K-T extinction.

The North American land mammal ages (NALMA) establishes a geologic timescale for North American fauna beginning during the Late Cretaceous and continuing through to the present. These periods are referred to as ages or intervals and were established using geographic place names where fossil materials were obtained.

The Willwood Formation is a sedimentary sequence deposited during the late Paleocene to early Eocene, or Clarkforkian, Wasatchian and Bridgerian in the NALMA classification.

Ignacius is a genus of extinct mammal from the early Cenozoic era. This genus is present in the fossil record from around 62-33 Ma. The earliest known specimens of Ignacius come from the Torrejonian of the Fort Union Formation, Wyoming and the most recent known specimen of Ignacius was found in the Medicine Pole Hills of North Dakota. Ignacius is one of ten genera within the family Paromomyidae, the longest living family of any plesiadapiforms, persisting for around 30 Ma during the Paleocene and Eocene epochs. The analyses of postcranial fossils by paleontologists suggest that members of the family Paromomyidae, including the genus Ignacius, most likely possessed adaptations for arboreality.

Wyonycteris is a genus of small mammals that existed in the late Paleocene and early Eocene epochs. The type species is Wyonycteris chalix, which lived in Wyoming during the Clarkforkian North American Land Mammal Age of the Paleocene and was originally proposed to be an early form of insectivorous bat. Later re-examination of the material has put this alliance in doubt, and the genus has instead been proposed as belonging to the subfamily Placentidentinae, within the family Nyctitheriidae. Similar fossil material of the same time period found in Europe was later discovered and described as new species, Wyonycteris richardi.

Chiromyoides is a small plesiadapid primatomorph that is known for its unusually robust upper and lower incisors, deep dentary, and comparatively small cheek teeth. Species of Chiromyoides are known from the middle Tiffanian through late Clarkforkian North American Land Mammal Ages (NALMA) of western North America, and from late Paleocene deposits in the Paris Basin, France.

Peradectes is an extinct genus of small metatherian mammals known from the Cretaceous and Paleocene of North and South America through the Eocene of North America and parts of Europe. The first discovered fossil of P. elegans, was one of 15 Peradectes specimens described in 1921 from the Mason pocket fossil beds in Colorado.

Carpodaptes was a genus that encompassed small, insectivorous animals that roamed the Earth during the Late Paleocene. Specifically, Carpodaptes can be found between the Tiffanian and Clarkforkian periods of North America. Although little evidence, this genus may have made it through to the early Eocene. They are known primarily from collections of jaw and teeth fragments in North America, mainly in southwestern Canada and northwestern America. Carpodaptes are estimated to have weighed approximately 53-96 grams which made them a little bigger than a mouse. However small, Carpodaptes was a placental mammal within the order Plesiadapiformes that appeared to have a high fiber diet. This insect-eating mammal may have been one of the first to evolve fingernails in place of claws. This may have helped them pick insects, nuts, and seeds more easily off the ground than with paws or claws. Carpodaptes was thought to only exist in North America but recent discoveries of dentition fragments have been found in China.

Navajovius is an extinct genus of plesiadapiforms that lived during the Paleocene epoch. Plesiadapiforms were small, arboreal mammals that are theorized to be either closely related to primates or dermopterans. Navajovius has only been documented from localities within North America. This genus was officially named in 1921 by Walter Granger and William Matthew and the type specimen is housed at the American Museum of Natural History.

Saxonella is a genus of extinct primate from the Paleocene Epoch, 66-56 Ma. The genus is present in the fossil record from around ~62-57 Ma. Saxonella has been found in fissure fillings in Walbeck, Germany as well as in the Paskapoo Formation in Alberta, Canada. Saxonella is one of five families within the superfamily Plesiadapoidae, which appears in the fossil record from the mid Paleocene to the early Eocene. Analyses of molars by paleontologists suggest that Saxonella most likely had a folivorous diet.

Torrejonia is a genus of extinct plesiadapiform that belongs to the family Palaechthonidae. There are currently two species known, T. wilsoni and T. sirokyi. This genus is present in the fossil record from around 62-58 Ma. Species belonging to this genus are suggested to be plesiadapiforms based on adaptations observed in the skeletal morphology consistent with arboreal locomotor behavior. Following the mass extinction event at the Cretaceous–Paleogene boundary (K-Pg), a large diversity of plesiadapiform families were documented beginning at the Torrejonian NALMA. Research has shown that T. wilsoni is one of the largest palaechthonids and is reconstructed as being more frugivorous than other palaechthonids.