TigerVNC is an open source Virtual Network Computing (VNC) server and client software, started as a fork of TightVNC in 2009. [2] The client supports Windows, Linux and macOS. The server supports Linux. There is no server for macOS [3] and the Windows server as of release 1.11.0 is no longer maintained. [4]

Red Hat, Cendio AB, and TurboVNC maintainers started this fork because RealVNC had focused on their enterprise non-open VNC and no TightVNC update had appeared since 2006. [2] The past few years however, Cendio AB who use it for their product ThinLinc is the main contributor to the project. [5] TigerVNC is fully open-source, with development and discussion done via publicly accessible mailing lists and repositories.

TigerVNC has a different feature set than TightVNC, despite its origins. For example, TigerVNC adds encryption for all supported operating systems and not just Linux. Conversly, TightVNC has features that TigerVNC doesn't have, such as file transfers.

TigerVNC focuses on performance and on remote display functionality. [6]

TigerVNC became the default VNC implementation in Fedora shortly after its creation. [7]

A 2010 reviewer found the TigerVNC product "much faster than Vinagre, but not quite as responsive as Remmina". [8]

Irssi is an IRC client program for Linux, FreeBSD, macOS and Microsoft Windows. It was originally written by Timo Sirainen, and released under the terms of the GNU GPL-2.0-or-later in January 1999.

In computing, TightVNC is a free and open-source remote desktop software server and client application for Linux and Windows. A server for macOS is available under a commercial source code license only, without SDK or binary version provided. Constantin Kaplinsky developed TightVNC, using and extending the RFB protocol of Virtual Network Computing (VNC) to allow end-users to control another computer's screen remotely.

Git is software for tracking changes in any set of files, usually used for coordinating work among programmers collaboratively developing source code during software development. Its goals include speed, data integrity, and support for distributed, non-linear workflows.

Transmission is a BitTorrent client which features a variety of user interfaces on top of a cross-platform back-end. Transmission is free software licensed under the terms of the GNU General Public License, with parts under the MIT License.

tsclient is a discontinued frontend for rdesktop and other remote desktop tools, which allow remotely controlling one computer from another. It is a GNOME application. Notable visual options include color depth, screen size, and motion blocking.

VirtualGL is an open-source software package that redirects the 3D rendering commands from Unix and Linux OpenGL applications to 3D accelerator hardware in a dedicated server and sends the rendered output to a (thin) client located elsewhere on the network. On the server side, VirtualGL consists of a library that handles the redirection and a wrapper program that instructs applications to use this library. Clients can connect to the server either using a remote X11 connection or using an X11 proxy such as a VNC server. In case of an X11 connection some client-side VirtualGL software is also needed to receive the rendered graphics output separately from the X11 stream. In case of a VNC connection no specific client-side software is needed other than the VNC client itself.

This is a comparison of notable free and open-source configuration management software, suitable for tasks like server configuration, orchestration and infrastructure as code typically performed by a system administrator. 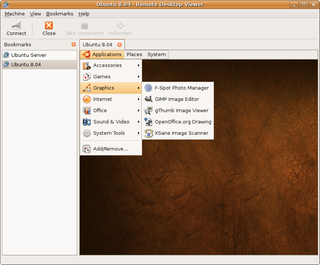 Vinagre is a discontinued VNC, SSH, RDP and SPICE client for the GNOME desktop environment, it is superseded by GNOME Connections. Vinagre was included in GNOME 2.22. It has several features, like the ability to connect to multiple servers simultaneously and to switch between them using tabs, VNC servers browsing and bookmarking. In version 2.29, Vinagre added controlling frame compression, better scaling and color depth. Version 2.30 added improved SSH tunneling and better support for copy-paste features between client and server.

Jami is a SIP-compatible distributed peer-to-peer softphone and SIP-based instant messenger for Linux, Microsoft Windows, OS X, iOS, and Android. Jami was developed and maintained by the Canadian company Savoir-faire Linux, and with the help of a global community of users and contributors, Jami positions itself as a potential free Skype replacement.

Progress Chef is a configuration management tool written in Ruby and Erlang. It uses a pure-Ruby, domain-specific language (DSL) for writing system configuration "recipes". Chef is used to streamline the task of configuring and maintaining a company's servers, and can integrate with cloud-based platforms such as Amazon EC2, Google Cloud Platform, Oracle Cloud, OpenStack, IBM Cloud, Microsoft Azure, and Rackspace to automatically provision and configure new machines. Chef contains solutions for both small and large scale systems.

Prey is a software and online platform for mobile device tracking, management, and protection available for laptops, tablets, and mobiles. The software and service is developed by the Chilean company Prey Inc., successor of the funding company Fork Ltd.

X2Go is an open source remote desktop software for Linux that uses a modified NX 3 protocol. X2Go gives remote access to a Linux system's graphical user interface. It can also be used to access Windows systems through a proxy.

Emby is a media server designed to organize, play, and stream audio and video to a variety of devices. Emby's source code was mostly open with some closed-source components as of August 2017, releases of the software published via the Emby website are however proprietary and cannot be replicated from source due to the build scripts also being proprietary. As of version 3.5.3 Emby has been relicensed and is now closed-source, while open source components will be moved to plugins. Due to this, a free open source fork of Emby was created called Jellyfin. Emby uses a client–server model.