The Tiger Hills Hockey League (THHL) is a senior ice hockey league that operates in the southwestern region of Manitoba, Canada. The league was formed on October 6, 1982 and first began play in the 1983-1984 hockey season.[ citation needed ]

It operates under the sanction of Hockey Manitoba, the provincial branch of Hockey Canada. The league champion advances to the Manitoba Senior 'A' Provincial Championship. 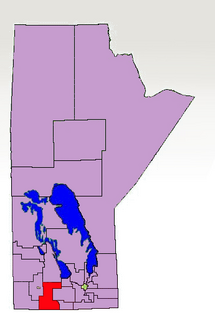 Turtle Mountain is a provincial electoral district in the Canadian province of Manitoba. It was created with the westward expansion of the province's boundaries in 1881, eliminated by redistribution in 1968, and re-established in 1979, formally returned to the electoral map with the provincial election of 1981, was dissolved for the 2011 election and returned once again for the 2019 Manitoba general election.

Boissevain is an unincorporated urban community in Manitoba near the North Dakota border that held town status prior to 2015. It is located within the Municipality of Boissevain – Morton. Boissevain is a community of just over 1,500 people and it is between Killarney and Deloraine on the east and west with Brandon in the north. The population of the surrounding area, within a 50 kilometre radius of the community, is about 15,000. 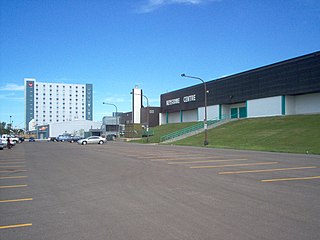 The Keystone Centre is a multi-purpose facility located in Brandon, Manitoba. Its main 5,102-seat arena which is known as Westoba Place is the home of the Brandon Wheat Kings of the Western Hockey League and the annual Royal Manitoba Winter Fair.

Killarney is an unincorporated community in southwestern Manitoba, Canada, at the corner of Manitoba Provincial Trunk Highways 3 & 18. The community was formerly an incorporated town before amalgamating with the surrounding Rural Municipality of Turtle Mountain to form the Municipality of Killarney-Turtle Mountain. Killarney is known for the lake situated within the community. Killarney is located in a rural area, dependent primarily on agriculture and agribusiness. It is approximately 20 km (12 mi) from the Canada-US border, 100 km (62 mi) south of Brandon and 250 km (160 mi) southwest of the provincial capital, Winnipeg. 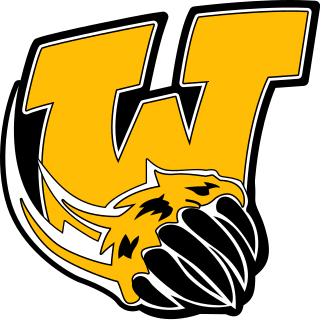 Donald Armond Dietrich was a Canadian ice hockey defenceman who played 28 games in the National Hockey League with the Chicago Black Hawks and New Jersey Devils between 1983 and 1986,. He was selected 183rd overall by the Chicago Black Hawks in the 1980 NHL Entry Draft. He joined the Hawks for 17 games in 1983–84, recording five assists, but spent most of his time in the Chicago organization in the minor leagues. He was traded to the New Jersey Devils in 1985 along with Rich Preston for Bob MacMillan. He appeared in 11 games with the Devils in 1985–86 before spending four years playing in West Germany. He retired in 1991.

The 2001–02 OPJHL season is the ninth season of the Ontario Provincial Junior A Hockey League (OPJHL). The thirty-six teams of the North, South, East, and West divisions competed in a 49-game schedule.

Bell MTS Iceplex is an ice hockey facility located in Winnipeg, Manitoba, Canada. The 172,000-square-foot (16,000 m2) building is owned and operated by True North Sports and Entertainment (TNSE), which also owns Canada Life Centre in downtown Winnipeg. The Winnipeg Jets of the National Hockey League and Manitoba Moose of the American Hockey League use the Iceplex as their practice and training facility.

The Manitoba Female Hockey League is an under-18 ice hockey league in the province of Manitoba, Canada. It is designated as an 'AAA' league – the highest level of minor hockey in Canada – and operates under the supervision of Hockey Manitoba.

The South Eastern Manitoba Hockey League (SEMHL) is a senior men's ice hockey league in the province of Manitoba, Canada. Founded in 1951, it is one of Manitoba's longest-running leagues. The SEMHL is affiliated with Hockey Manitoba, the provincial branch of Hockey Canada.

The Prairie Mountain Health is the governing body responsible for healthcare delivery and regulation for the eponymous health region in southwest Manitoba.

The D Division is the division of the Royal Canadian Mounted Police responsible for federal policing in Manitoba and, at times, northwestern Ontario. Headquartered in Winnipeg, the division is commanded by Assistant Commissioner Jane MacLatchy and consists of 1089 police officers and 438 support staff.

The 2020–21 season was the Manitoba Junior Hockey League's (MJHL) 104th year of operation. The league was unable to complete the season for the second consecutive year due to the COVID-19 pandemic.