Tigerspike is a software company headquartered in Sydney. It was founded in 2003 by Luke Janssen, Oliver Palmer, and Dean Jezard. [1] [2] [3] [4] Tigerspike was acquired by Concentrix in 2017, and rebranded as Concentrix Tigerspike in 2020.

Tigerspike was founded in 2003 in Sydney, Australia. [4] In 2008, Tigerspike opened its Innovation Lab, which focuses on new technologies, including encryption and compression. [4] The lab is headed by Oliver Palmer. [4]

In 2011, Tigerspike secured a US$ 11 million investment from Aegis Group. [3] [5] The same year, Tigerspike was featured on Forbes’ list of America’s Most Promising Companies and expanded into Singapore. [6] [7]

In November 2020, Tigerspike announced that it was changing its operating name to Concentrix Tigerspike. [10]

Concentrix Tigerspike has designed and developed applications for print media companies such as The Economist and Haaretz. [1] [11] [12] Their cloud-based service platform is used by clients including Pepsi, Vodafone and the World Wide Fund for Nature. [3] The company also developed the ICSA Blueprint BoardPad app, an enterprise app used for board meetings and agenda for 71 of the FTSE 100 companies. [13] 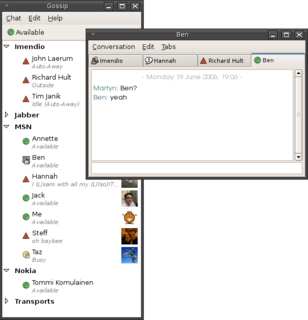 Instant messaging (IM) technology is a type of online chat allowing real-time text transmission over the Internet or another computer network. Messages are typically transmitted between two or more parties, when each user inputs text and triggers a transmission to the recipient(s), who are all connected on a common network. It differs from email in that conversations over instant messaging happen in real-time. Most modern IM applications use push technology and also add other features such as emojis, file transfer, chatbots, Voice over IP, or video chat capabilities.

RingCentral, Inc. is an American publicly traded provider of cloud-based communications and collaboration solutions for businesses.

iAd is a discontinued mobile advertising platform developed by Apple Inc. for its iPhone, iPod Touch, and iPad line of mobile devices allowing third-party developers to directly embed advertisements into their applications. iAd is part of Apple's iOS 4. Announced on April 8, 2010, and originally slated for release on June 21, 2010, the actual date was changed to July 1, 2010. iAd was announced at Apple's June 7, 2010 keynote, with an iPad version appearing in the fall. Hosted and sold by Apple, the iAd platform was expected to compete with Google's AdMob mobile advertising service.

The Conduit toolbar was an online platform that allowed web publishers to create custom toolbars, web apps, and mobile apps at no cost. It was developed by Conduit Inc. but demerged to Perion Network. Conduit had approximately 260,000 registered publishers who have collectively created content downloaded by more than 250 million end users. Web apps and pieces of content developed through Conduit's platform can be distributed and exchanged online via the Conduit App Marketplace. Currently, 60 million users consume apps from the marketplace on a daily basis.

WhatsApp Messenger, or simply WhatsApp, is an internationally available American freeware, cross-platform centralized instant messaging (IM) and voice-over-IP (VoIP) service owned by Meta Platforms. It allows users to send text messages and voice messages, make voice and video calls, and share images, documents, user locations, and other content. WhatsApp's client application runs on mobile devices but is also accessible from desktop computers, as long as the user's mobile device remains connected to the Internet while they use the desktop app. The service requires a cellular mobile telephone number to sign up. In January 2018, WhatsApp released a standalone business app targeted at small business owners, called WhatsApp Business, to allow companies to communicate with customers who use the standard WhatsApp client.

Apperian, Inc. was a Boston-based software company that provided a mobile application management platform that does not require app code modifications or software development kits (SDKs).

Viber, or Rakuten Viber, is a cross-platform voice over IP (VoIP) and instant messaging (IM) software application owned by Japanese multinational company Rakuten, provided as freeware for the Android, iOS, Microsoft Windows, macOS and Linux platforms. Users are registered and identified through a cellular telephone number, although the service is accessible on desktop platforms without needing mobile connectivity. In addition to instant messaging it allows users to exchange media such as images and video records, and also provides a paid international landline and mobile calling service called Viber Out. As of 2018, there are over a billion registered users on the network.

Whisper Systems was an American enterprise mobile security company that was co-founded by security researcher Moxie Marlinspike and roboticist Stuart Anderson in 2010. The company was acquired by Twitter in November 2011. Some of the company's software products were released under open-source licenses after the acquisition. An independent group called Open Whisper Systems later picked up the development of this open-source software, which led to the creation of the Signal Technology Foundation.

Spiking is a social trading platform providing financial information about 10 stock exchange markets in Asia and Australia. By processing the latest disclosures published on the markets, the platform allows investors to track stocks for moves made by company directors and substantial shareholders. It also provides other relevant information, like the main shareholders of companies or the portfolios of sophisticated investors.

Skyfire is a software company founded in 2007, and acquired by Opera Software ASA, now Otello Corporation, in 2013. In 2015, the company became the Network Solutions division of Opera, and ceased using the Skyfire brand name. They offer network optimization technologies including video optimization and monetization tools for carriers. Skyfire discontinued its Skyfire Web Browser in 2014 in order to consolidate its focus on its mobile operator technology. Skyfire was funded by venture capital, and was acquired by Opera Software ASA in March 2013.

Roambi is a business application that changes raw business data into interactive graphics designed for mobile devices on the iOS platform such as Apple Inc.’s iPhone, iPad and iPad Mini. The applications connect to popular information systems including Excel or Salesforce.com and business intelligence systems such as Cognos and corporate databases such as Microsoft SQL. The app is currently used by over 20% of the Fortune 50 and has been downloaded more than 600,000 times.

Airpush is a private company founded in 2010 that provides bootstrapped mobile advertising platform. It is known as one of the largest mobile ad platforms with over 120,000 live apps utilizing its SDK. Airpush is based in Los Angeles, California with offices in Bangalore, India.

IBM Mobile is a portfolio of mobile solutions for businesses offered by the information technology company IBM that includes software, cloud services, and partnerships. 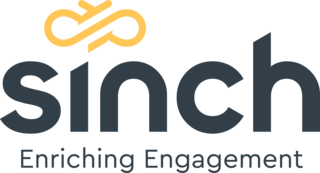