"Tightrope" is a song by Australian rapper, Illy. Written by Mark Landon and Alasdair Murray [1] and produced by the former under his stage name, M-Phazes [2] the song was first released in March 2014 through Illy's record label, ONETWO [3] as the fourth single from Illy's fourth studio album, Cinematic (2013).

"Tightrope" was well received by fans [4] and was also singled out as one of the strongest tracks on Cinematic in Navarone Farrell's review of the album for The AU Review. [5]

Whilst recording material for his fourth studio album, Cinematic (2013), Illy collaborated with a variety of artists including the Hilltop Hoods, Daniel Merriweather and Ahren Stringer of The Amity Afflcition among others. When asked about the album's material Illy responded, "It’s the most ambitious work I’ve done and these are the biggest risks I’ve taken, but I believe they’re the strongest songs I’ve written". [4]

"Tightrope" was eventually released as the follow-up to the album's third single, "Youngbloods" in March 2014. [3] While the album version of the song features guest vocals by Kristina Miltiadou [6] [7] [8] [9] the single version features vocals by Scarlett Stevens. [3] The album version was released to radio and also used in the song's accompanying music video. When speaking about the single, Illy commented, "Tightrope has been going off on the tour. It’s good to have a single that can also be a track that goes down really well in a live performance". [4]

The song's accompanying music video runs for approximately three minutes and thirty-seven seconds. The video centres on Illy who is seen rowing a boat across a lake. As he continues to do so however, he is followed and subsequently shot at by a woman, causing his boat to sink and sending him into the water. [10]

"Tightrope" debuted at number thirty-nine on the Australian ARIA singles chart and after re-entering the chart twice, eventually reached its peak position of number eighteen during its ninth week on the chart, thereby becoming Illy's first top twenty hit and one of his top hits to date. [1] The song was certified Platinum by the Australian Recording Industry Association (ARIA), denoting shipments in excess of 70,000 copies. 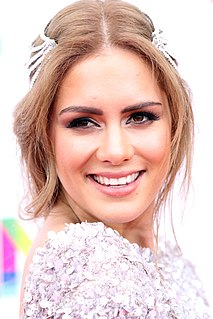 Reigan Elisse Derry, also known mononymously as Reigan, is an Australian singer and songwriter. Derry rose to fame after placing eleventh on the fourth season of Australian Idol in 2006. The following year, she became a member of the Australian pop duo Scarlett Belle, who disbanded in 2011. Three years later, Derry placed fourth on the sixth season of The X Factor Australia. She subsequently received a recording contract with Sony Music Australia and released her debut extended play, All of the Pieces, in December 2014. Currently Reigan works as a club singer for various agencies in Sydney and the Gold Coast.

"Something's Missing" is the third single from Australian indie pop band Sheppard's debut album Bombs Away. It is the follow up to their 5x platinum selling, number-one single, "Geronimo". The single was announced on 23 June 2014 in conjunction with the album and tour details. "Something's Missing" was available to download on iTunes on 27 June 2014.

"The Millennium Prayer" is a song recorded by English singer Cliff Richard, in which the words of the Lord's Prayer are set to the tune of "Auld Lang Syne". It was released in November 1999 as a charity single in the lead-up to the end of the 1900s. The single became a surprise hit reaching number one in the UK Singles Chart, number two in Australia and New Zealand, number three in Ireland, and the top 20 in a number of European countries. 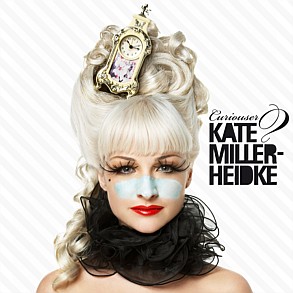 Curiouser is the second studio album by Australian singer-songwriter Kate Miller-Heidke. The first two singles, "Can't Shake It" and "Caught in the Crowd" received moderate success, while the third single "The Last Day on Earth" went on to become her first Australian top ten single, peaking at No. 3 on the ARIA singles chart. The album went on to become one of the most critically applauded albums of 2008 and is Miller-Heidke's first platinum-selling album. 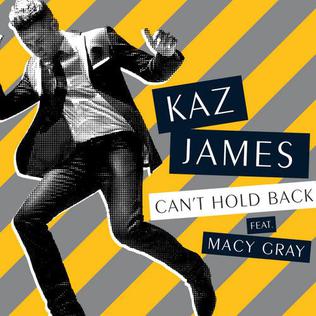 "Can't Hold Back" is the third single released by Australian singer Kaz James, taken from his 2008 debut solo album, If They Knew. It is the singer's first solo top 50 single in Australia. Macy Gray is a featured vocalist on the song.

"Foreign Land" is the first single by Eskimo Joe, taken from their fourth studio album Inshalla. It was released on 3 April 2009 on the Australian iTunes Store and was released 17 April 2009 as a digital EP and physical single. The single contains elements of traditional Turkish folk music from Adiyaman, Turkey.

Jason Owen is an Australian singer from Dubbo, New South Wales and was the runner-up to Samantha Jade in The X Factor in 2012 and subsequently received a recording contract with Sony Music Australia. 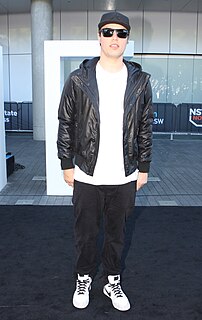 Alasdair Murray, better known by his stage name Illy, is an Australian hip hop recording artist from Ormond in Melbourne, Australia. Illy first emerged onto the hip hop scene in 2009 and has released five studio albums and has won multiple ARIA Music Awards. Illy has performed at many Australian music festivals including headline spots at Groovin The Moo, Splendour in the Grass, Spilt Milk and Yours and Owls. 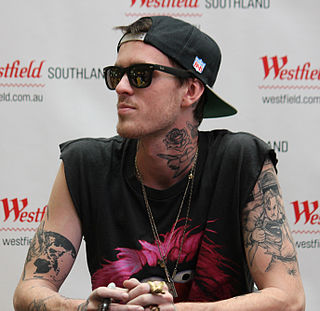 Matthew James Colwell, better known by his stage name 360, is an Australian rapper. He has released four studio albums: What You See Is What You Get (2008); Falling & Flying (2011), which peaked at No. 4 on the ARIA Albums Chart and was certified platinum; Utopia (2014), and Vintage Modern (2017). 360's second album provided four charting singles, including "Boys like You", which peaked at No. 3 on the ARIA Singles Chart and was certified 4× platinum. At the ARIA Music Awards of 2012, he received six nominations and won the 'Breakthrough Artist – Release' award for Falling & Flying, while Styalz Fuego won the ARIA 'Producer of the Year' Artisan award for the same album.

San Cisco is an Australian indie pop band that formed in 2009 under the original name of King George, in Fremantle, Western Australia. The band are a four-piece, and consists of Jordi Davieson, Josh Biondillo, Jennifer Aslett (bass) and Scarlett Stevens. All members, except Stevens, share duties on keyboards. In November 2011, the band was signed by Albert Productions, but moved to Fat Possum Records for the release of its debut album. In October 2012, the band described its 'vibe' as "squelchy, crispy, streamlined, hairy, indie". At the ARIA Music Awards of 2013 the group were nominated for Best Independent Release and Best Dance Release for the album; and Best Video for "Fred Astaire", which was directed by Andrew Nowrojee.

"Flashing Lights" is a song by Australian DJ and recording artist Havana Brown for her first studio album of the same name (2013). Produced by RedOne, it was released as the album's lead single on 23 August 2013 as a digital download. Official remixes were digitally released on 13 September 2013. The recording was written by Brown, along with RedOne, John Mamann, Jean Claude Sindres, Yohanne Simon and Teddy Sky. The theme of the "Flashing Lights" is about a toxic relationship.

"Lanterns" is the second single from Australian alternative rock band Birds of Tokyo's fourth album, March Fires. Band member Ian Berney said "It was always about our own sense of community and reaching far and wide in the most positive way we could, with the most positive message we had at the time, and it really connected with people."

"When the Night Falls Quiet" is the third single from Australian alternative rock band Birds of Tokyo's fourth album, March Fires. The song peaked at #43 on the Australian Singles Chart,. The song was used for preview promos for the last few episodes of the second season of Revenge on Australia's Seven Network in 2013.

Seany B is a singer/songwriter/MC/producer/DJ from Melbourne, Australia, who is best known for featuring on TV Rock's 2006 hit "Flaunt It" which topped the ARIA Charts for 5 weeks and went on to win two ARIA Awards for Best Dance Single as well as Highest Selling Single in 2006 as well as featured on Vanessa Amorosi's Mr Mysterious, which peaked at No. 4 in 2010 and was certified platinum. He has toured America and Europe

"Everything Is Allowed" is a song by Nigerian-born Australian singer-songwriter and dancer Timomatic. It was released as a digital download in Australia on November 10, 2013. It is the third single from his yet-to-be-titled second studio album, originally due in 2014. 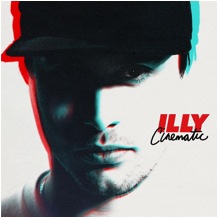 "Spirit of the Anzacs" is the first single from Lee Kernaghan's 2015 album of the same name. The charity single features Guy Sebastian, Sheppard, Jon Stevens, Jessica Mauboy, Shannon Noll and Megan Washington. It was released on 22 January 2015 to raise funds for Legacy and Soldier On. "Spirit of the Anzacs" is the first taste of an album that has brought soldiers' letters to life in song. The project was inspired by Kernaghan's 2014 visit to the Australian War Memorial when he was shown archives of soldiers letters to family from the front lines. "Spirit of the Anzacs" is based on Paul Keating's 1993 eulogy at the interment of the Unknown Soldier, one of Australia's most iconic speeches. Kernaghan said the song was inspired by Keating's immortal words, "He is all of them. And he is one of us."

"I'd Go with You Anywhere" is a song by Australian band, Birds of Tokyo. It was written by the group and released on 25 September 2015 as the lead single from their compilation album, Playlist. "I'd Go with You Anywhere" debuted at No. 40 on the ARIA singles chart and peaked at No. 18 five weeks later, becoming Birds of Tokyo's third Top 20 hit after "Plans" (2010) and "Lanterns" (2013).

"Wild at Heart" is the third single from Australian alternative rock band Birds of Tokyo's self-titled third album, Birds of Tokyo. The song peaked at #50 on the Australian Singles Chart in February 2011 and was certified gold. It was voted #47 in Triple J's Hottest 100 countdown of 2010.