Savage was named new club captain for Gloucester Rugby from Director of Rugby Nigel Davies for the 2013–14 season. [3]

On 5 April 2019, Savage left Gloucester after eight seasons with his home club to play with Suntory Sungoliath in Japan's Top League competition. [4]

Japan Rugby League One is a rugby union competition in Japan. It is the highest level of professional rugby competition in the country. The Japan Rugby Football Union created the competition in 2003, by absorbing the Japan Company Rugby Football Championship, to drive up the overall standard and popularity of the sport and improve the results of the Japan national rugby union team. The chief architect of the league was Hiroaki Shukuzawa who strongly felt the urgency of improving Japanese domestic company rugby to a professional level which would allow Japan to compete more convincingly at Rugby World Cups. 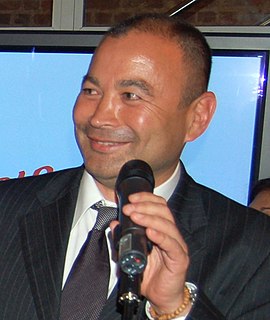 Edward Jones is an Australian rugby union coach and former player, who is currently head coach of the England national team. He previously coached Australia between 2001 and 2005, taking the team to the 2003 Rugby World Cup Final. He was an assistant coach for South Africa when the Springboks won the 2007 Rugby World Cup and from 2012 to 2015 he coached Japan, leading them in the 2015 Rugby World Cup and their upset win over South Africa. In November 2015, Jones was appointed as head coach for England and led them to win the 2016 and 2017 Six Nations Championships, becoming only the second international rugby team to go the entire calendar year unbeaten. He led England to the 2019 Rugby World Cup final where they were beaten by South Africa. 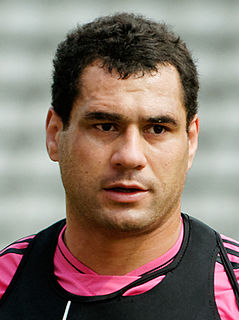 George Smith is a retired Australian rugby union player. He was a flanker for Bristol Bears, though he is more known for his 12 years (2000–10,13) at the ACT Brumbies in Super Rugby, earning 142 caps. 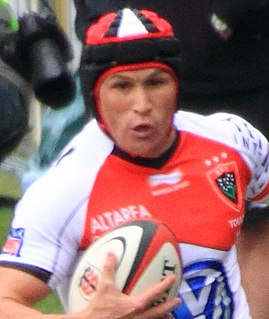 Matthew James Giteau is an Australian rugby union professional player who is playing with the LA Giltinis of Major League Rugby (MLR). Giteau joined the Giltinis after a short playing stint with the Gungahlin Eagles in the ACTRU Premier Division in 2020. His regular playing positions are Inside centre, Halfback and Fly-half. 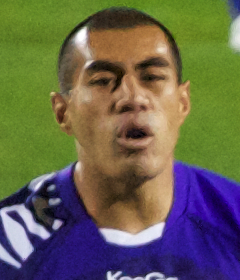 Tusi Pisi is a Samoan rugby union player who plays for the Toyota Industries Shuttles in the Top Challenge League. His position is fly half, but he has also played at centre and full back. He is the current first choice flyhalf for the Samoa national team.

Ryan Tamarua Nicholas is an Australian-born Japanese rugby union player who plays for Suntory Sungoliath of the Top League in Japan. In July 2011, he received Japanese citizenship. Although he is of Cook Island Maori heritage, he has played internationally for Japan since 2008. 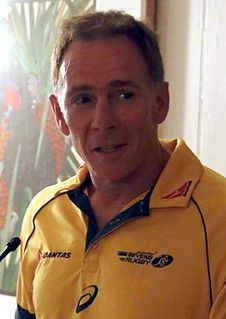 Andrew Friend is an Australian rugby union coach and former player. He is currently the head coach of Irish province Connacht. He was previously head coach of the Australia Sevens team, the Brumbies in Super Rugby, English club Harlequins, and Canon Eagles and Suntory Sungoliath in the Japanese Top League. 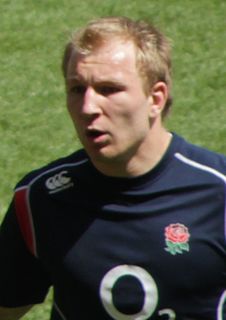 Matthew Boris "Matt" Kvesic is an English professional rugby union player for Premiership Rugby side Worcester Warriors. Born in Germany to English parents, he represented England at international level and played for several youth representative sides before making his debut for the senior team in 2013. Predominantly an openside flanker, he has also played on the blindside and at number eight.

Mike Sherry is an Irish former rugby union player. He played as a hooker and represented Garryowen in the All-Ireland League. 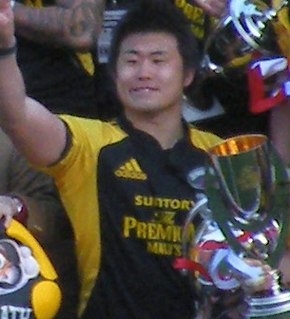 The 2012–13 Top League was the tenth season of Japan's domestic rugby union competition, the Top League. It kicked off on 31 August 2012. The final was held on 27 January 2013 and won by Suntory Sungoliath to claim their third Top League title.

Gareth Evans is an English retired professional rugby union player. Between 2011 and 2019 played 85 times for Gloucester, and also played for the Ospreys in Wales. He joined Leicester Tigers in August 2021, but retired without featuring in a first team game for the club in November 2021.

Samuela Vatuniveivuke Kerevi is a Fijian-born Australian rugby union player currently playing for Suntory Sungoliath in the Japanese Top League. His usual position is centre. He previously played for the Queensland Reds in Super Rugby and has played for the Australian national team. 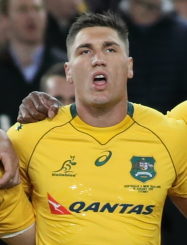 Sean McMahon is an Australian rugby union player for Suntory Sungoliath in the Japanese Top League. His regular playing position is Flanker. 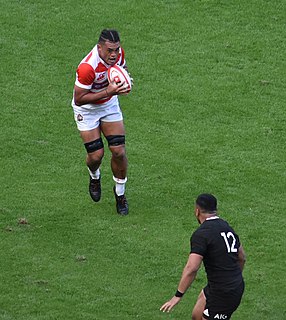 Hendrik Tui is a Japanese international rugby union player who currently plays as a loose forward for Suntory Sungoliath in the Top League. From 2015 he will represent the Queensland Reds in Super Rugby. He also plays the position of Wing.

Joe Latta is a New Zealand rugby union player for Suntory Sungoliath in the Top League. His regular playing position is Lock.