Thomas Leroy Wilson (born December 19, 1970) is a former professional baseball player. He played all or part of four seasons in Major League Baseball, primarily as a catcher.

Drafted by the New York Yankees in the 23rd round of the 1990 Major League Baseball Draft, Wilson made his major league debut with the Oakland Athletics on May 19, 2001. He played nine games for the Athletics, and was traded in early 2002 to the Toronto Blue Jays for Mike Kremblas. He spent two seasons on the Blue Jays, playing 96 games each season. The following season, he played a few games with the Mets, and later the Dodgers, in his final major league season.

The highlight of Wilson's career came on October 5, 2004. As a member of the Los Angeles Dodgers, Wilson hit a solo home run in the National League Division Series against St. Louis Cardinals closer Jason Isringhausen. With this at bat being his only postseason plate appearance, Wilson boasts a 1.000 career postseason batting average with a 4.000 slugging percentage. This at bat was also the last official at bat of Wilson's major league career.

On December 21, 2004, Wilson became a free agent. He was signed to a minor league contract by the Colorado Rockies, but spent the entire season with their Triple-A affiliate, the Colorado Springs Sky Sox. A free agent again prior to the 2006 season, Wilson played for the Triple-A affiliate of the Florida Marlins, the Albuquerque Isotopes. Wilson compiled a career .253 batting average with 15 home runs and 76 runs batted in in 554 at-bats.

Following his retirement, Wilson became a scout for the New York Yankees. [1] 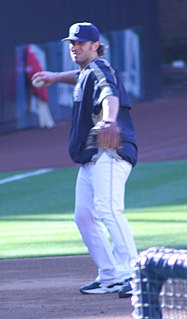 Mark Christian Bellhorn is an American former professional baseball infielder. In his ten-year Major League Baseball (MLB) career, Bellhorn was best known for being the starting second baseman for the Boston Red Sox during their 2004 World Series championship season.

William Hayward "Mookie" Wilson is an American former Major League Baseball outfielder and coach remembered as the Met who hit the ground ball that rolled through Bill Buckner's legs in the bottom of the 10th inning of game six of the 1986 World Series.

Jason Lee "Jay" Payton is a former Major League Baseball outfielder. He has played for the New York Mets (1998-2002), Colorado Rockies (2002-2003), San Diego Padres (2004), Boston Red Sox (2005), Oakland Athletics (2005-2006) Baltimore Orioles (2007-2008) and the Colorado Rockies in 2010. He batted and threw right-handed. Payton was an opposite-field hitter with some power. He had great speed as a runner, but did not steal many bases. Defensively, he was a solid outfielder with an above-average arm, and his quickness getting rid of the ball helped him hold baserunners on the base paths. He is currently serving as an in game analyst with ESPNU for college baseball. 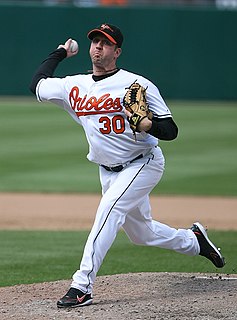 John Henry Vander Wal is a former American Major League Baseball left-handed hitter who played outfield and first base for eight different teams over 14 seasons. He is now a coach for the West Michigan Whitecaps.

William Shawn Wooten is the assistant major league hitting coach for the Los Angeles Angels. He is a former professional baseball player. He played all or part of five seasons in Major League Baseball with the Anaheim Angels (2000–03), Philadelphia Phillies (2004), and Boston Red Sox (2005). He bats and throws right-handed. 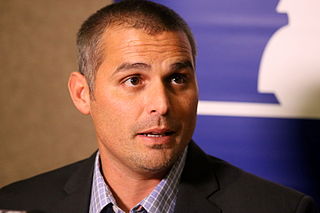 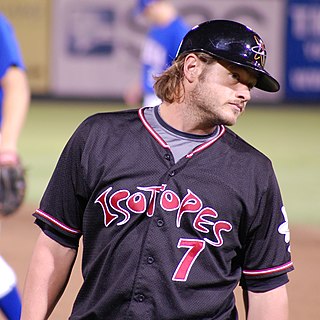 Mariano Duncan Nalasco is a retired second baseman and shortstop who played for several Major League Baseball teams during his 12-year career. He was the infield coach and 1st base coach for the Los Angeles Dodgers under Managers Grady Little and Joe Torre. Duncan currently serves as the hitting coach for the Brooklyn Cyclones, the New York Mets' High-A team.

Ronald William Hassey is an American former professional baseball player. He played in Major League Baseball (MLB) as a catcher for the Cleveland Indians (1978–1984), Chicago Cubs (1984), New York Yankees (1985–1986), Chicago White Sox (1986–1987), Oakland Athletics (1988–1990), and Montreal Expos (1991). Hassey is notable for being the only catcher in MLB history to have caught more than one perfect game. Hassey joined Gus Triandos as the only catchers in MLB history to have caught a no-hitter in both leagues. 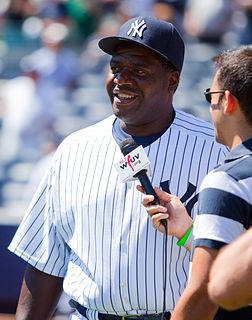 Charles Dewayne Hayes is an American former professional baseball third baseman and current coach for the GCL Phillies. Hayes played in Major League Baseball for the San Francisco Giants, Philadelphia Phillies, New York Yankees, Colorado Rockies, Pittsburgh Pirates, Milwaukee Brewers, and Houston Astros from 1988 through 2001. He was a member of the Yankees' 1996 World Series championship team that beat the Atlanta Braves. He batted and threw right-handed.

Scott John Brow is a former pitcher who played in Major League Baseball from 1993 to 1998. He primarily pitched middle relief, but he did start four games in his major league career, three of which were in his rookie season. He graduated from Hillsboro High School in Hillsboro, Oregon, and also graduated from the University of Washington, where he played college baseball for the Huskies from 1988–1990. Brow won the World Series with the Toronto Blue Jays in 1993. Brow was additionally a member of the inaugural Arizona Diamondbacks 1998. 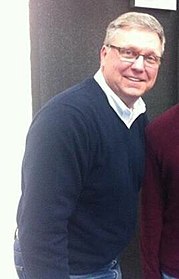 Brian Reed Doyle is a former Major League Baseball infielder. Although a reserve for most of his career, Doyle starred in the 1978 World Series for the World Champion New York Yankees that beat the Los Angeles Dodgers.

Darwin James Kunane Barney is an American former professional baseball infielder and current coach. He played in Major League Baseball (MLB) for the Chicago Cubs, Los Angeles Dodgers, and Toronto Blue Jays. As a member of the Cubs in 2012, he won both the Rawlings Gold Glove Award and the Fielding Bible Award in recognition of his defensive skills at second base.

Gregory Joseph Golson is an American former professional baseball outfielder. A first round selection in the 2004 Major League Baseball draft by the Philadelphia Phillies, Golson played in Major League Baseball (MLB) for the Phillies (2008), Texas Rangers (2009), and New York Yankees (2010–2011).

Peter Michael Kozma is an American professional baseball shortstop for the Oakland Athletics organization. He has played in Major League Baseball (MLB) for the St. Louis Cardinals, New York Yankees, Texas Rangers and Detroit Tigers. The Cardinals selected him in the first round of the 2007 MLB draft from Owasso High School in Oklahoma, and he made his MLB debut for them on May 18, 2011. He is 6 feet 0 inches (1.83 m), weighs 190 lb (86 kg), and bats and throws right-handed.

Ángel Aristedes Chávez is a Panamanian professional baseball infielder. He made his Major League Baseball debut as an infielder with a late-season call up in 2005 for the San Francisco Giants. He has compiled a .269 career average with 74 home runs, 478 RBI and 98 stolen bases, in 936 minor league contests. He originally signed with the San Francisco Giants as a non-drafted free agent on October 30, 1998. He was born in David, Chiriquí, Panama.