Tom Zoellner is an American author and journalist. He is the author of popular nonfiction books which take multidimensional views of their subject. His work has been widely reviewed and has been featured on The Daily Show . [1] His book Island on Fire: The Revolt That Ended Slavery in the British Empire was a finalist for the Bancroft Prize in history and in 2021 won the National Book Critics Circle Award for Nonfiction. [2] [3]

Zoellner was born on September 20, 1968, and grew up on the fringes of Tucson, Arizona, where graduated from Canyon del Oro High School. He briefly attended the University of Arizona and graduated with a B.A. in history and English from Lawrence University, where he was the editor of the campus newspaper. He worked as a general assignment reporter for a succession of newspapers throughout the United States – including the Superior Express, the Wyoming Tribune-Eagle , the Savannah Morning News , The Salt Lake Tribune , the San Francisco Chronicle and The Arizona Republic —before leaving daily journalism altogether to write books. He received an M.A.L.S degree from Dartmouth College and now works as a professor of English at Chapman University. [4] He lives in Los Angeles. [5]

His first book was The Heartless Stone: A Journey Through the World of Diamonds, Deceit and Desire (St. Martin’s Press, 2006), an investigative chronicle of the diamond business reported from sixteen nations. Zoellner had to go deeply into debt to do the research for this book, which also told a personal story: the demise of his engagement to a woman in San Francisco and his consequent difficulties in letting go of the diamond ring which had been given back to him. The book was called “a dazzling display of intrepid reporting,” by Entertainment Weekly magazine, and “an illuminating expose of a mineral and an industry,” by The Wall Street Journal'. [6]

His follow-up book was Uranium: War Energy and the Rock that Shaped the World (Viking/Penguin, 2009), which took a similar multi-faceted approach to a mineral as his previous look at the diamond business. Zoellner has said it is impossible to understand the true historical effect of an object without seeing its international footprint, as well as the economics, politics, psychology, physics, theology and literature of that object. Uranium was praised by The New York Times and Washington Post , and by The Daily Show host Jon Stewart, who called it “crazy, fascinating.” The book won the 2010 Science Writing Award from the American Institute of Physics.

Beginning in 2014, Zoellner was instrumental in gathering support from the Museum of Moab, San Juan County, the Bureau of Land Management, and Mark Steen—son of Charles Steen—for a historic marker commemorating Utah's uranium heritage. [7] The marker is located on the Anticline Overlook road off U.S. 191 and was dedicated on November 4, 2016. [8] Artist Michael Ford Dunton created an arch to frame the historical marker and view of the location of the Mi Vida mine seven miles to the east of the marker. [8]

While working as a reporter in Arizona, Zoellner had become friends with future U.S. Rep. Gabrielle Giffords, who was then in the state legislature, and he later worked as a speechwriter and field organizer on her Congressional campaigns. Shortly after Giffords was shot and badly wounded in a January 8, 2011, assassination attempt, Zoellner began writing an explanation of the sociological roots of the event. The manuscript was finished in slightly under 100 days and the resulting book, A Safeway in Arizona: What the Gabrielle Giffords Shooting Tells Us About the Grand Canyon State and Life in America (Viking/Penguin, 2012), was published to mixed reviews. The Boston Globe praised it as “a masterly work of reporting, historical analysis, and sly cultural criticism,” [9] but other reviewers faulted the book for its conclusion that Giffords’ attempted killer had been influenced by a hateful climate in Tucson preceding the 2010 midterm Congressional elections.

His next book, Train: Riding the Rails that Created the Modern World, from the Trans-Siberian to the Southwest Chief (Penguin-Random House, 2014) is a return to the multidimensional narrative of international scope. The book was reported via a series of rail journeys in Britain, Spain, Russia, China, India, Peru and across the U.S. and has been praised as “an exuberant celebration” by Booklist , "wonderful" by The Washington Post, [10] "spirited and big-hearted," by the San Francisco Chronicle [11] and "engaging" and "keenly observed" by The New York Times'. [12] In 2016, he has since published articles on various facets of train safety and infrastructure. [13] [14]

Zoellner is also the co-author of An Ordinary Man (Viking/Penguin, 2006), the autobiography of Paul Rusesabagina, the real-life hotel manager whose story was featured in the film "Hotel Rwanda." The book was a New York Times bestseller in hardcover and paperback, and was translated into 14 languages.

In 2016, Zoellner became the politics editor at the Los Angeles Review of Books. [15]

Zoellner received a Lannan Foundation Residency Fellowship in 2017. [16] Zoellner has previously received residencies from the Mesa Refuge, [17] The Millay Colony for the Arts, [18] and the Corporation at Yaddo. [19]

In May 2020, Zoellner published Island on Fire The Revolt That Ended Slavery in the British Empire (Harvard University Press, 2020), a day-by-day account of the Baptist War lead by Samuel Sharpe in 1831-1832. [20] In 2021, Zoellner's Island on Fire won the National Book Critics Circle Award for Nonfiction. [21]

In October 2020, Zoellner published The National Road: Dispatches from a Changing America (Counterpoint Press, 2020), a collection of essays based on Zoellner's years of travel and reporting throughout the United States. [22] NPR noted, "Zoellner has logged tens of thousands of miles zigzagging the continent with a small tent, backpack, and hiking boots. His book is a fascinating investigation into American places and themes; metaphors for our country." [23]

Mark Edward Kelly is an American politician, former astronaut and retired U.S. Navy captain serving as the junior United States senator from Arizona since 2020. A member of the Democratic Party, he won the 2020 special election, defeating incumbent Republican Martha McSally. Formerly an aerospace consultant and executive, Kelly is the author of several books.

Charles Augustus Steen was a geologist who made and lost a fortune after discovering a rich uranium deposit in Utah during the uranium boom of the early 1950s.

Carolyn Forché is an American poet, editor, professor, translator, and human rights advocate. She has received many awards for her literary work. 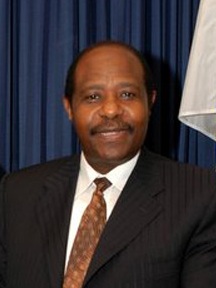 Paul Rusesabagina is a Rwandan politician, activist and humanitarian. He worked as the manager of the Hôtel des Mille Collines in Kigali, during a period in which it housed 1,268 Hutu and Tutsi refugees from the Interahamwe militia during the Rwandan genocide. None of these refugees were hurt or killed during the attacks.

Stewart O'Nan is an American novelist.

Nathaniel Philbrick is an American author of history, winner of the National Book Award, and finalist for the Pulitzer Prize. His maritime history, In the Heart of the Sea: The Tragedy of the Whaleship Essex, which tells the true story that inspired Melville's Moby-Dick, won the 2000 National Book Award for Nonfiction and was adapted as a film in 2015.

Gabrielle Dee Giffords is an American politician and gun control advocate who served as a member of the United States House of Representatives representing Arizona's 8th congressional district from January 2007 until January 2012, when she resigned due to a severe brain injury suffered during an assassination attempt. A member of the Democratic Party, Giffords was the third woman in Arizona's history to be elected to the U.S. Congress.

Benedict Richard Pierce Macintyre is a British author, historian, reviewer and columnist for The Times newspaper. His columns range from current affairs to historical controversies.

Tom Barbash is an American writer of fiction and nonfiction, educator and critic. He is the author of the novel The Last Good Chance, a collection of short stories Stay Up With Me, and the bestselling nonfiction work On Top of the World: Cantor Fitzgerald, Howard Lutnick & 9/11: A Story of Loss & Renewal. His fiction has been published in Tin House, Story magazine, The Virginia Quarterly Review and The Indiana Review. His criticism has appeared in the New York Times and the San Francisco Chronicle.

Bad Schlema is a community in the district of Erzgebirgskreis in Saxony in Germany. It was merged into the new town Aue-Bad Schlema in January 2019. It belongs to the Silberberg Town League. The Silver Road (Silberstraße) runs through the town. The community is developing its tourist industry, above all its spa facilities.

Thomas Centolella is an American poet and educator. He has published four books of poetry and has had many poems published in periodicals including American Poetry Review. He has received awards for his poetry including those from the National poetry Series, the American Book Award, the Lannan Literary Award for Poetry and the Dorset Prize. In 2019, he received a Guggenheim Fellowship. 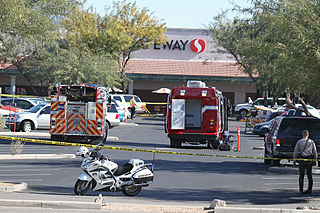 On January 8, 2011, U.S. Representative Gabby Giffords and 18 others were shot during a constituent meeting held in a supermarket parking lot in Casas Adobes, Arizona, in the Tucson metropolitan area. Six people died, including federal District Court Chief Judge John Roll; Gabe Zimmerman, one of Giffords' staffers; and a 9-year-old girl, Christina-Taylor Green. Giffords was holding the meeting, called "Congress on Your Corner", in the parking lot of a Safeway store when Jared Lee Loughner drew a pistol and shot her in the head before proceeding to fire on other people. One additional person was injured in the immediate aftermath of the shooting. News reports identified the target of the attack to be Giffords, a Democrat representing Arizona's 8th congressional district. She was shot through the head at point-blank range, and her medical condition was initially described as "critical".

Natalie Diaz is a queer, Latina and Mojave American poet, language activist, former professional basketball player, and educator. She is enrolled in the Gila River Indian Community and identifies as Akimel O'odham.

Americans for Responsible Solutions (ARS) was a United States non-profit organization and super PAC that supports gun control. The group's stated goal is "to encourage elected officials to stand up for solutions to prevent gun violence and protect responsible gun ownership." It typically supports Democratic politicians in elections. In 2016, the organization merged with the Law Center to Prevent Gun Violence to become Giffords.

Bethany Barton is an author and illustrator of children's books. Her 2015 book I’m Trying To Love Spiders (Viking/Penguin) garnered numerous awards and starred reviews, including the 2016 Children's Choice Award 3rd/4th Grade Book of The Year. Her 2017 book Give Bees A Chance (Viking/Penguin) was a 2017 SCIBA Award finalist, was listed in Scripps National Spelling Bee “Great Words, Great Works,” and was featured in the New York Times. Her books have been translated into 4 languages. Her newest book, I'm Trying to Love Math, was named an Amazon Best Book of 2019 Her newest in the series, I'm Trying To Love Rocks (Viking/Penguin), hit stores in June 2020.

Gabrielle Calvocoressi is an American poet, editor, essayist, and professor.