The Arizona Republic is an American daily newspaper published in Phoenix. Circulated throughout Arizona, it is the state's largest newspaper. Since 2000, it has been owned by the Gannett newspaper chain.

Dwight B. Heard, a Phoenix land and cattle baron, ran the newspaper from 1912 until his death in 1929. The paper was then run by two of its top executives, Charles Stauffer and W. Wesley Knorpp, until it was bought by Midwestern newspaper magnate Eugene C. Pulliam in 1946. Stauffer and Knorpp had changed the newspaper's name to The Arizona Republic in 1930, and also had bought the rival Phoenix Evening Gazette and Phoenix Weekly Gazette, later known, respectively, as The Phoenix Gazette and the Arizona Business Gazette.

Pulliam, who bought the two Gazettes as well as the Republic, ran all three newspapers until his death in 1975 at the age of 86. A strong period of growth came under Pulliam, who imprinted the newspaper with his conservative brand of politics and his drive for civic leadership. Pulliam was considered one of the influential business leaders who created the modern Phoenix area as it is known today.

Pulliam's holding company, Central Newspapers, Inc., as led by Pulliam's widow and son, assumed operation of the Republic/Gazette family of papers upon the elder Pulliam's death. The Phoenix Gazette was closed in 1997 and its staff merged with that of the Republic. The Arizona Business Gazette is still published to this day.

In 1998, a weekly section geared towards college students, "The Rep", went into circulation. Specialized content is also available in the local sections produced for many of the different cities and suburbs that make up the Phoenix metropolitan area.

Central Newspapers was purchased by Gannett in 2000, bringing it into common ownership with USA Today and the local Phoenix NBC television affiliate, KPNX. The Republic and KPNX combine their forces to produce their common local news subscription website, www.azcentral.com. On September 25, 2015, Mi-Ai Parrish was named Publisher and President of both the paper and its AZCentral.com website, effective October 12. [3]

Notable figures include Pulitzer-prize winning cartoonist Steve Benson, columnist Laurie Roberts, and Luis Manuel Ortiz, the only Hispanic member of the Arizona Journalism Hall of Fame. One of Arizona's best-known sports writers, Norm Frauenheim, retired in 2008. Multiple staff members have been finalists for the Pulitzer Prize. Other staff include photojournalist Michael Schennum.

An investigative reporter for the newspaper, Don Bolles, was the victim of a car bombing on June 2, 1976, dying eleven days afterward. He had been lured to a meeting in Phoenix in the course of work on a story about corruption in local politics and business and the bomb detonated as he started his car to leave. Retaliation against his pursuit of organized crime in Arizona is thought to be a motive in the murder.

Historically, The Republic has tilted conservative editorially. It endorsed President George W. Bush in both the 2000 and 2004 presidential elections. On October 25, 2008, the paper endorsed Arizona Senator John McCain for president. [6]

In local elections, it has recently endorsed Democratic candidates such as former Arizona Governor, former Secretary of Homeland Security, and now President of the University of California Janet Napolitano and former Arizona Congressman Harry Mitchell.

On September 27, 2016, the paper endorsed Hillary Clinton for the 2016 presidential election, marking the first time in the paper's 126-year history that it had endorsed a Democratic candidate for president. Previously, the paper had only withheld its endorsement from a Republican nominee/candidate twice in its history.

During the unusual sequence of events that led up to the 1912 presidential election the paper had opted not to endorse the "formal" Republican party nominee for that election cycle. This was shortly after Theodore Roosevelt had lost the Republican convention nomination to William Howard Taft in the controversial, and allegedly rigged, [7] party convention of that year. After Roosevelt's convention loss, and also after the hasty formation of the "made to order" Bull Moose Party, the paper continued to endorse Theodore Roosevelt via the newly formed party. As a result of Roosevelt's insistence on an independent presidential bid that year, the Republican party of 1912 was in disarray, yielding that year's presidential election to the Democrats, with the GOP only able to carry a total of 8 electoral votes that year. Two of the main planks of Roosevelt's progressive Bull Moose platform had been campaign finance reform and improved governmental accountability.

In the 1968 presidential election, the paper declined to endorse either Richard Nixon or Hubert Humphrey, asserting that "all candidates are good candidates." [8] In the paper's 2016 editorial decision to take the further step of actually endorsing a Democratic candidate for the first time, the paper argued that despite Clinton's flaws, it could not support Republican nominee Donald Trump, denouncing him as "not conservative" and "not qualified." The board also argued that Trump had "deep character flaws.... (and) ... stunning lack of human decency, empathy and respect," suggesting that it was evidence he "doesn't grasp our national ideals." The paper also noted its concern regarding whether or not Trump would possess the necessary restraint needed for someone with access to nuclear weapons, stating, "The president commands our nuclear arsenal. Trump can’t command his own rhetoric." [9] [10] 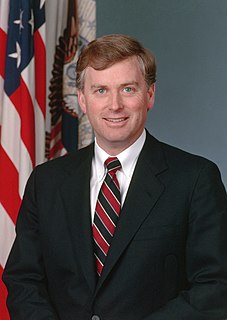 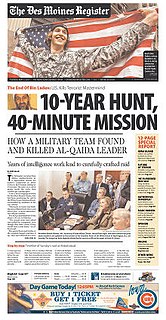 KPNX, virtual and VHF digital channel 12, is an NBC-affiliated television station serving Phoenix, Arizona, United States that is licensed to Mesa. The station is owned by Tegna Inc. KPNX's studios are located at the Republic Media building on Van Buren Street in downtown Phoenix, and its transmitter is located atop South Mountain on the city's south side.

Eugene Collins Pulliam was an American newspaper publisher and businessman who was the founder and president of Central Newspapers Inc., a media holding company. During his sixty-three years as newspaper publisher, Pulliam acquired forty-six newspapers across the United States. Major holdings of Central Newspapers, which he founded in 1934, included the Indianapolis Star, the Indianapolis News, the Arizona Republic, and the Phoenix Gazette, as well as newspaper in smaller cities in Indiana, Arizona, and other states. Pulliam's early career included work as a reporter for the Kansas City Star and as editor and publisher of the Atchison (Kansas) Daily Champion. Prior to 1960 Pulliam also operated radio stations WAOV and WIRE in Indiana and KTAR in Arizona. The Kansas native, a graduate from DePauw University in 1910, founded the DePauw Daily, an independent student newspaper, and in 1909 was one of ten DePauw students who cofounded Sigma Delta Chi, a journalism fraternity that was later renamed the Society of Professional Journalists. In August 2000, the Gannett Company acquired Central Newspapers for US$2.6 billion, with the Eugene C. Pulliam Trust as the principal beneficiary of the sale.

The Portland Press Herald/Maine Sunday Telegram is a morning daily newspaper with a website at pressherald.com that serves southern Maine and is focused on the greater metropolitan area around Portland, Maine, in the United States.

The Phoenix Gazette was a newspaper published in Phoenix, Arizona, United States. It was founded in 1881, and was known in its early years as the Phoenix Evening Gazette.

Darrow J. "Duke" Tully was a former publisher of the Arizona Republic and the Phoenix Gazette newspapers, published in Phoenix, Arizona. Both were owned by Central Newspapers, Inc., headquartered in Indianapolis, Indiana, at the time. Central Newspapers was founded by Eugene C. Pulliam, grandfather of United States Vice President Dan Quayle.

During the 2008 United States presidential election, newspapers, magazines, and other publications made general election endorsements. As of November 4, 2008, Barack Obama had received more than twice as many publication endorsements as John McCain; in terms of circulation, the ratio was more than 3 to 1, according to the detailed tables below. 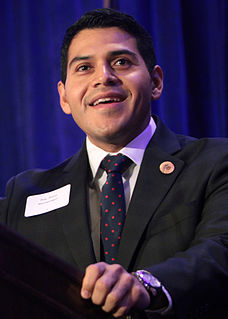 Newspapers made endorsements of candidates in the 2012 United States presidential election, as follows.

Kelli Ward is an American politician who has served as the Chair of the Arizona Republican Party since 2019. A Republican, she previously served in the Arizona State Senate from 2012 to 2015. Ward challenged Senator John McCain in the Republican primary for the United States Senate in 2016. She resigned from the State Senate to focus on the race; Ward was subsequently defeated 51% to 39%.

Newspapers and news media in the United States traditionally endorse candidates for party nomination for President of the United States, prior to endorsing one of the ultimate nominees for president. Below is a list of notable news media endorsements in 2016, by candidate, for each primary race.

The 2016 Arizona Republican Primary took place on March 22 in the U.S. state of Arizona as one of the Republican Party's primaries ahead of the 2016 presidential election. Despite a late challenge by Texas Senator Ted Cruz, Donald Trump won the primary and netted all 58 delegates in the winner-take-all contest. On the same day were held Democratic and Green primaries in Arizona, as well as Republican and Democratic caucuses in Utah and Idaho Democratic caucus, so the day was dubbed "Western Tuesday" by media.

Newspapers made endorsements of candidates in the 1900 United States presidential election. Incumbent President William McKinley was the Republican candidate, and William Jennings Bryan the Democratic candidate, a rematch of the 1896 election.

Newspapers made endorsements of candidates in the 1904 United States presidential election. Incumbent President Theodore Roosevelt who took office after William McKinley was assassinated in 1901 was the Republican candidate, and Alton B. Parker the Democratic candidate. Harper's Weekly ran a cartoon in September 1904 called "Tom's Dream", a reference to DNC Chairman Thomas Taggart, and his hope that the major newspapers of the country would endorse Parker. His dream largely did not come true, as most newspapers endorsed Roosevelt in this election. 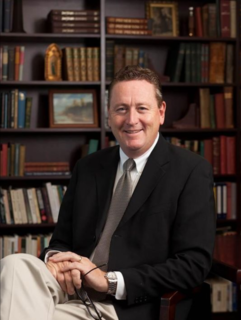 Jay Helier is an American lawyer, political analyst, journalist, businessman, and a leader in the professional education community. Heiler currently serves as Treasurer of the Board of the Arizona Board of Regents and is a member of the Business and Finance Committee, Academic and Student Affairs Committee and the Regents Executive Committee. Heiler is also the co-founder and Board Chairman of Great Hearts Academies, a charter school network operating several K-12 campuses in Arizona and Texas. He also leads as the President of the Arizona Charter School Association.