The Herald-Mail is a newspaper serving the cities of Hagerstown, Maryland, Chambersburg, Pennsylvania, and Martinsburg, West Virginia and the surrounding counties.

The Morning Herald was the first daily newspaper in Hagerstown, beginning publication in 1873. The Mail began in 1828 but was not a daily paper, The Daily Mail, until 1890. In 1920, the two papers merged. In 1960, they were purchased by Schurz Communications of South Bend, Indiana. The Herald-Mail offered them as two weekday newspapers: in the morning, The Morning Herald and in the afternoon, The Daily Mail. On October 1, 2007, the newspaper company combined the two weekday papers into one morning paper, The Herald-Mail. This move followed a national trend of print paper consolidation to better compete with the growing popularity of news resources of the World Wide Web. The Weekend Edition has been and continues to be offered on Saturday and Sunday as a single morning edition also called The Herald-Mail.

The newspaper has a paid circulation of 27,000 Monday through Saturday and 32,000 on Sunday. The Herald-Mail has 60,000 average daily readers, 20% of the readership is from readers in Pennsylvania and West Virginia. The Herald-Mail website registers 3 million page-views monthly, with an average of 330,000 unique visitors per month. [1]

The Herald-Mail has been owned by Schurz Communications since 1960 and functions as the second largest newspaper by circulation in the company. Schurz Communications also owns the area's cable company, Antietam Cable. [2] The headquarters for the newspaper is on 100 Summit Avenue in downtown Hagerstown. Since 2011 It has been printed by The Frederick News-Post in Frederick, MD. [3] In 2019, Schurz sold the paper to GateHouse Media. [4]

The New Haven Register is a daily newspaper published in New Haven, Connecticut. It is owned by Hearst Communications. The Register's main office is located at 100 Gando Drive in New Haven.

Gannett Athens Banner-Herald is an under 20,000 circulation newspaper in Athens, Georgia, owned by Gannett.

A bulldog edition is an early edition, or the first edition, of a daily newspaper and can be dated in advance. It is sometimes called the street edition.

The American News is a newspaper in Aberdeen, South Dakota, published by Gannett of McLean, Virginia. It's published six days a week, Monday through Saturday.

The Cape Cod Times is a broadsheet daily newspaper serving Cape Cod, Martha's Vineyard and Nantucket, Massachusetts, United States. It is owned by Gannett. It is also the sister paper of the weekly The Barnstable Patriot.

The Albany Democrat-Herald is a daily newspaper published in Albany, Oregon, United States. The paper is owned by the Iowa-based Lee Enterprises, a firm which also owns the daily Corvallis Gazette-Times, published in the adjacent market of Corvallis, Oregon, as well as two weeklies, the Lebanon Express and the Philomath Express. The two daily papers publish a joint Sunday edition, called Mid-Valley Sunday.

The News & Advance is the daily newspaper of record in Lynchburg, Virginia. Its circulation is approximately 35,600 on weekdays, 35,000 on Saturdays and 41,200 on Sundays. Its primary circulation area consists of the city of Lynchburg and the surrounding counties of Amherst, Appomattox, Bedford, and Campbell. 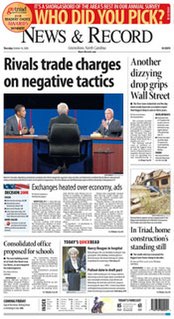 The Herald-Times is a daily newspaper serving Bloomington, Indiana and surrounding areas. The newspaper won the Blue Ribbon Daily award in 1975, 1984 2007, and 2014, naming it the best daily newspaper in the state of Indiana in those years.

Lebanon Daily News is a local daily newspaper based in Lebanon, Pennsylvania. The main office is located on 718 Poplar Street. It publishes as an afternoon paper Monday through Friday and as a morning paper on Saturday and Sunday.